This project was, perhaps, not the smartest choice as my re-entry into weaving after my time away because of my injury and apathy.  Weaving a new structure was an ambitious choice, but I thought that once I got started, I could learn the treadling pattern and be on my merry way.  I was correct about that; it didn't take long for my brain to be able to tell my feet exactly what to do without looking at the instructions.  And it was fun to see the overall differences as I changed the weft color with every new towel.

Here's a shot of the warp off the loom pre-wash, so that the photo in the link to this blog won't just be strings; 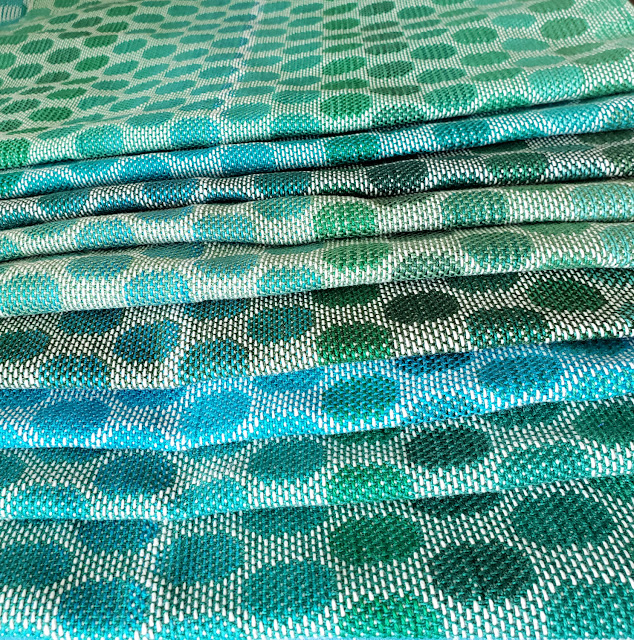 As a refresher, perhaps you may remember that when I was measuring out the yarn, I somehow missed 10 ends smack dab in the middle of the warp.  It took me a bit to realize this, so I had to unthread about 26 ends, then measure out the ends that were missing and thread and sley them before I could finish threading the whole warp.  I then came up with a pretty funky but serviceable gizmo to hold and tension said ends.  Oh yes, and I also had a sleying error on another end and had to fix that before I could commence weaving.  Now I know that things like this happen, distressingly regularly with me, so after not weaving for several months I took the errors and time to fix them in stride, confident that the worst was over.

Then I came to the end of the penultimate towel.

As I wound the warp forward so that I could start weaving the 8th and last towel, I saw that my "fixer" yarns were, shall we say, quite short. 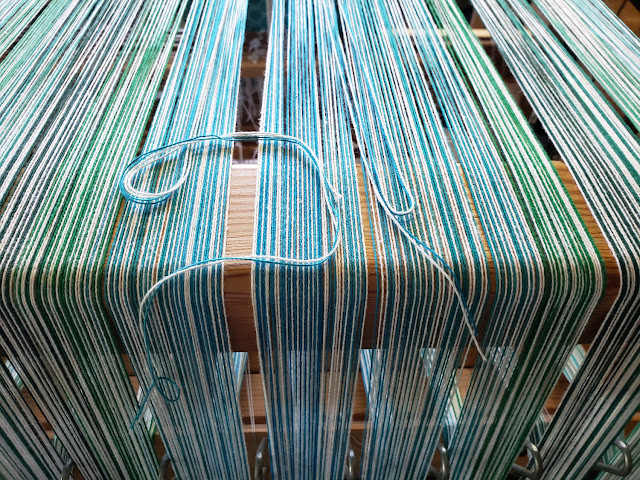 None were the same length as the others (naturally), but all were approximately a yard or so short.  So disgusted with myself and so bored with the project was I, that at first I thought I would just cut the whole warp off to save myself the trouble of fixing them.  Again.  I gave myself permission to wait for the final decision until the next day, so I walked away and got busy doing other things.

Sure enough, the next morning I decided that it wouldn't be THAT hard to fix 10 measly pieces of string.  I found the two colors involved and measured out three wing-span's worth of each of them, along with the natural colored yarn.  I carefully rolled them onto my fingers in groups of 2 and placed them on top of my shafts, awaiting threading. 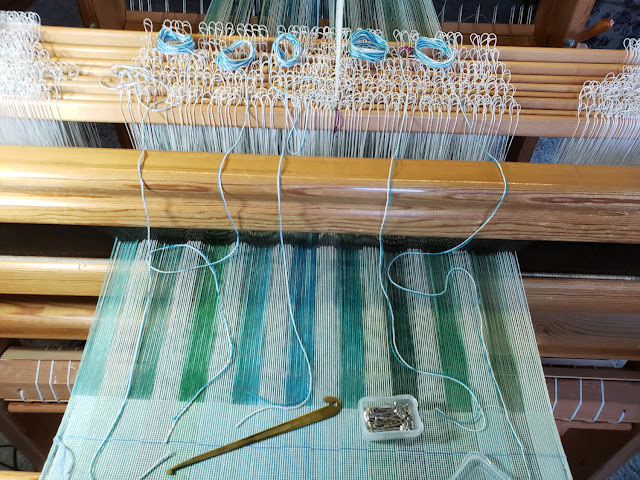 In order to accomplish this, I had to get INSIDE my loom, follow the short yarns to the heddles so that I could thread these in the same order, so as not to mess up the pattern.  It took me several minutes to thread the first one, mostly because the entire warp was very tight, and trying to get my hands in place, both in front of and behind the shafts was difficult.  I had also committed a very basic weaving faux pas - do not mess with yarn that is untensioned, as it does not cooperate.  The short yarns were too short to add tension to (i.e. hang with a weight off the back of the loom), so trying to follow them and then get them out of the ways was proving difficult.  However, I told myself that I was in no hurry, just take a deep breath and keep going.

The second yarn was done in the same fashion, yet when I checked my work before proceeding to the third string, I found that the second one had somehow gotten twisted with one of the other warp yarns that didn't need fixing.  I pulled it out and straightened it all out, then rethreaded it again.  And again, it was twisted, but in a different way.  I looked again, just to be sure that my eyes weren't deceiving me.  Nope.  I let out a breath.  I may have uttered an oath or two.  And that is when I muttered "Uncle."  Out came the scissors, and I have to say, I felt quite good as I cut that warp off the loom, despite the waste. 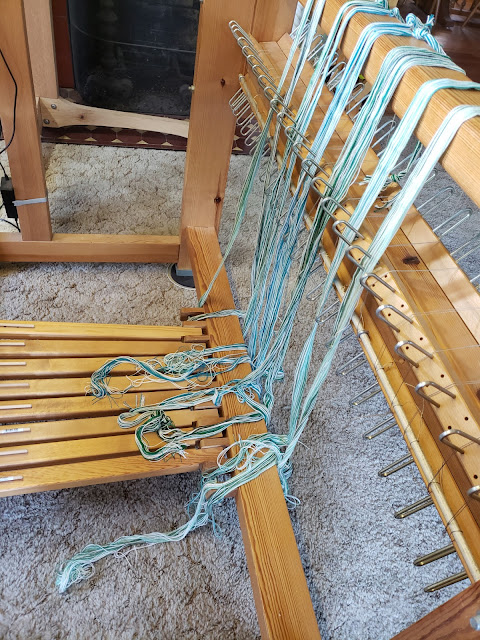 There will be one towel with one treadling error that I thought I could fix but can't, so either that one will be sold with the error at a discount, or it will be mine.

The towels are now awaiting the spa treatment.  I just wasn't in the mood to do laundry today, especially the dreaded ironing.

The idea for this shot was borrowed from Lynnette at the blog Dust Bunnies Under My Loom.  So much creativity out there in the weaving world! 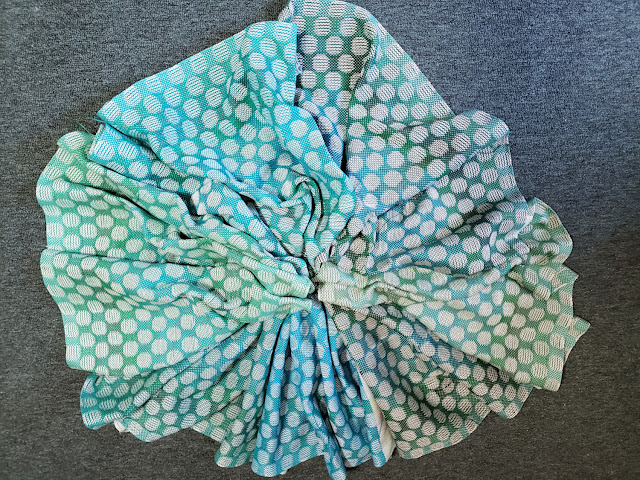 In other news,  hubby and I went for a row in T Harbor yesterday, ostensibly just to have a nice outing, but he also wanted me to compare scenery with some photos to help locate his mooring which had been cut and lost at some point.  It was a beautiful day, sunny with a wind, not too hot - perfect for time on the water, as long as he did the rowing. 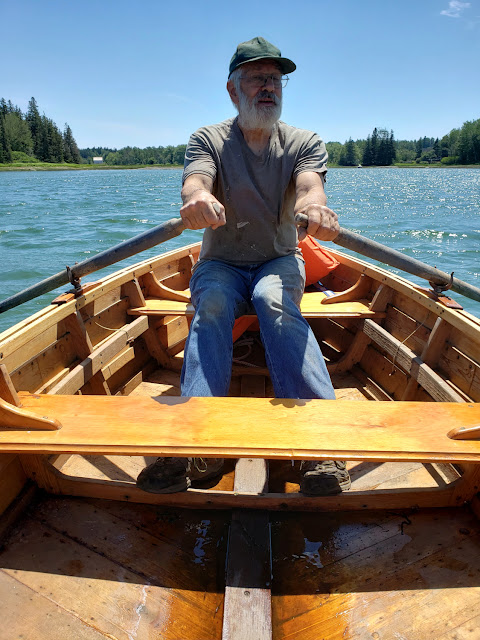 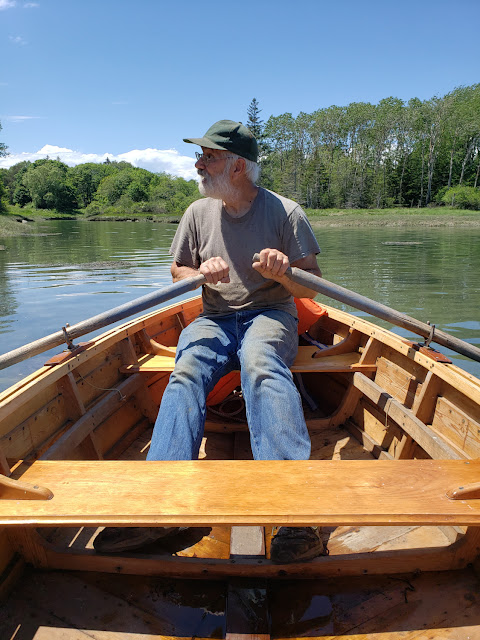 In the above photos, he was looking at a bunch of geese, maybe a new family, that were making their way through some tall grass on the edge of the water.  They looked kind of comical, because all we could see were their heads and the top of the necks. 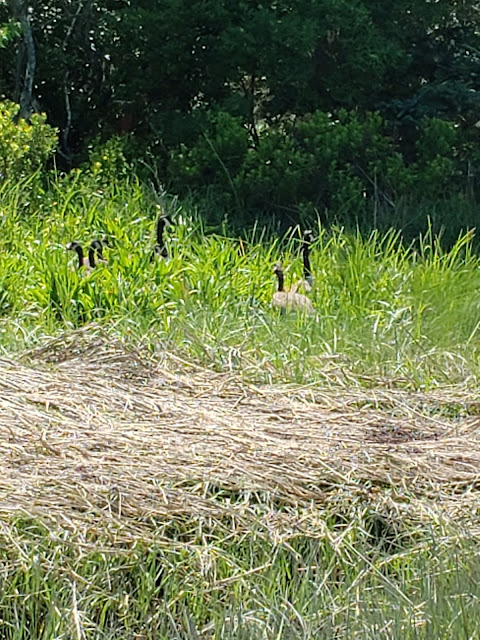 In garden news, the day lilies are starting to open, and our salvia are blooming as well.  Nice to see so much color. 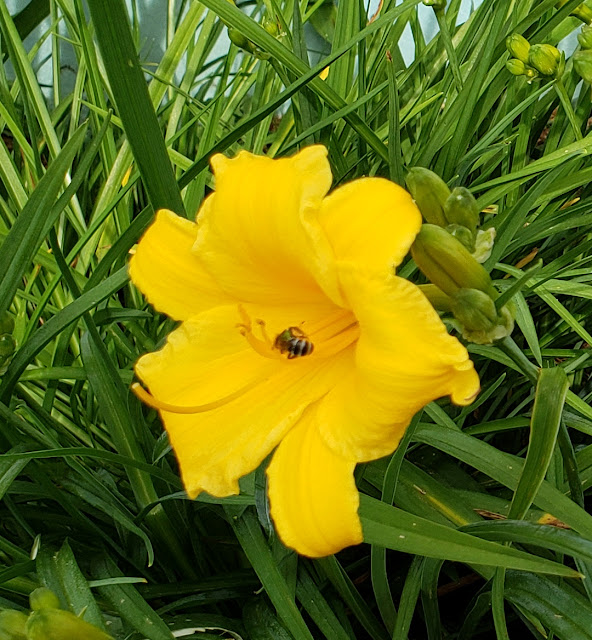 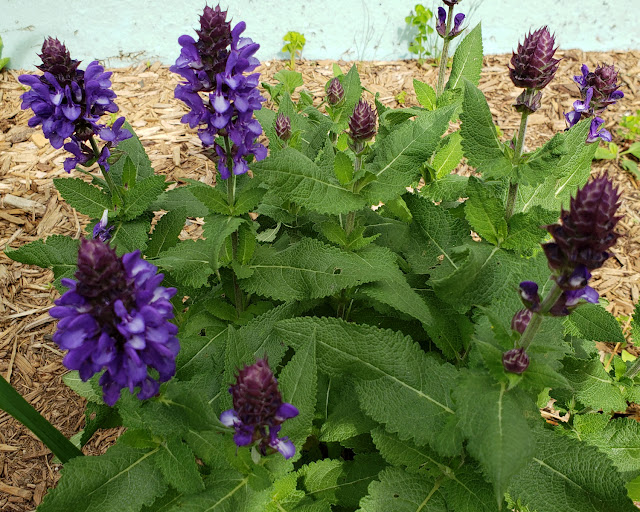 After doing all of the finish work on these towels, I have to give some thought to a project that I have been commissioned for.  I also want to do some simple weaving, in the hopes of making a tunic!