I finally have some progress to report on the huck lace baby blanket warp!  After working on it in my "free" time since January 8th, I can report that all of the warp is on the sectional beam and is hanging from the lease sticks behind the shafts.  I still need to move some heddles from shafts 7 and 8 to shafts 1 and 2 before I can start threading, as there are many, many more ends on those first 2 shafts in any huck lace draft.  The one saving grace to this grind of warping such a wide warp, is that the Supima cotton is so very soft, it's a pleasure to have it run through my hands over and over.

Here is a shot of the sectional beam taken this morning; You can see that I could have gone a bit wider, but not by much.  I kept wonking into those uprights when I was beaming the outermost sections.  This is the widest warp I have ever done, so weaving should be interesting!

And here is the warp hanging from the lease sticks.  It looks very disorganized, because there was a long length of warp hanging down from the sticks, and I have cats, so I just laid them back onto the sticks.  Once I move the heddles, I'll move the sticks forward to just behind the shafts, which will take up some of the long length. 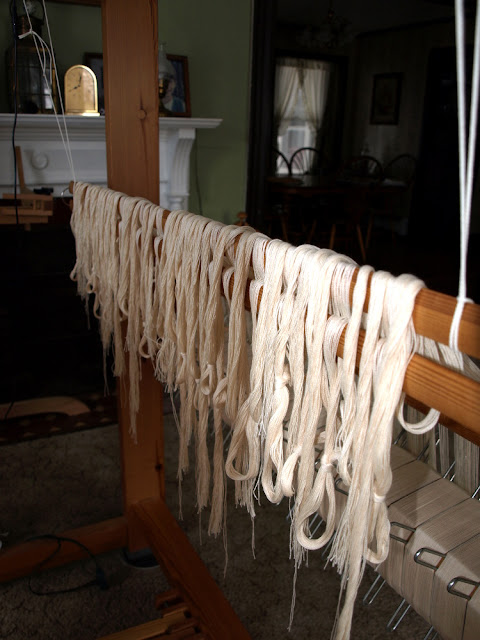 On another note, here's a bit of an interesting story from yesterday.  Last fall, I took out an old violin that my grandfather had owned and had tried to teach himself many decades ago.  I have no idea when he got it or how old it was when he did, and I never actually saw him play it, but I've been told that he was not very successful in his efforts.  It's been in our house for a long time, and I had never tried it before, though hubby and sons had in the past and just gotten scratchy noise.  I decided to try to teach myself a bit, but had to replace the strings and the bridge, and get a new bow.  Still, it wasn't pretty!  I would practice every day that I could, and I think my open bowing sounded ok, but most fingered notes were diminished no matter what I did.  Being me, I obviously blamed it all on myself and my lack of ability/experience.

The violin got put away during the holidays, and when I got it out a couple of weeks ago, the strings were very loose, and the pegs wouldn't stay put.  I contacted a local strings shop, but couldn't get the violin there until yesterday.  In the meantime, once the weather stopped being sub-zero, the pegs behaved so I could start practicing again, without much improvement.  I almost didn't bring it to the shop, since the pegs weren't the problem anymore, but decided to anyway.  Now, mind you, the violin looks old, and has many cracks, most of which had been repaired after a fashion.  The case was awful, old with no padding.  But still my screeching must be me, right??  He took one look at it, and basically said it is unplayable.  My first reaction?  Phew!!  So maybe not totally me!  Then my heart sank because a new violin is not in the budget.  He looked some more, pointed out all kinds of problems, but then said that he was intrigued.  He estimated that the violin was from the late 1700's to early 1800's, and has not been treated well.  The body is a bit bigger than most, but not big enough to be a cut-down viola.  The scroll is original, some of the wood grafting was done with great skill, but some not at all.  He wants to research it some more and may want to keep it to restore it if I don't want to put thousands into it - um, nope.  We may do a trade, so that I have something to play.  We ended up talking to him for about an hour, about violin and bow histories, wood and sound qualities (which greatly interested my wooden boat building hubby), as well has other interesting Maine and musical topics.  It was very fascinating.  So, for now, I can rest my fingers and keep watching Youtube tutorials, and await his assessment later this coming week or the next.