Before I get to the announcement, I wanted to share a couple of photos of the baby blanket warp on the lease sticks, ready to thread.  There was a request from Peg to show this, as she thought that a cross was not necessary when using a sectional beam.  I say, it all depends.  I have two-inch sections. so that can be a lot of ends to keep in a semblance of order, though I have threaded without a cross in the past.  Obviously, if there was colorwork involved, a cross would make threading easier.

So here are two photos of the warp hanging on the lease sticks with the cross preserved, ready for threading.  One is taken from the front, one from the back. 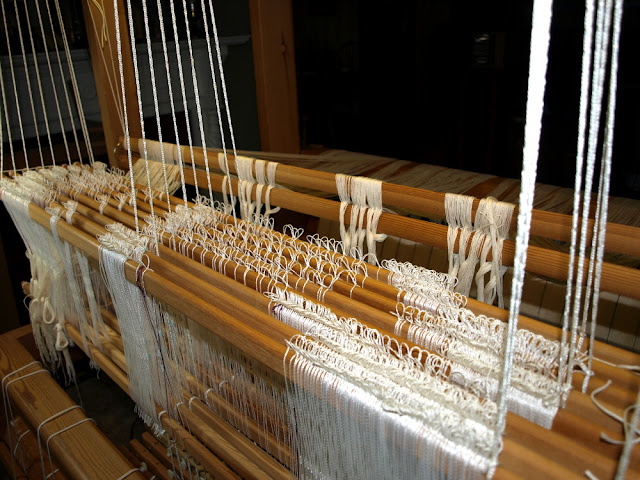 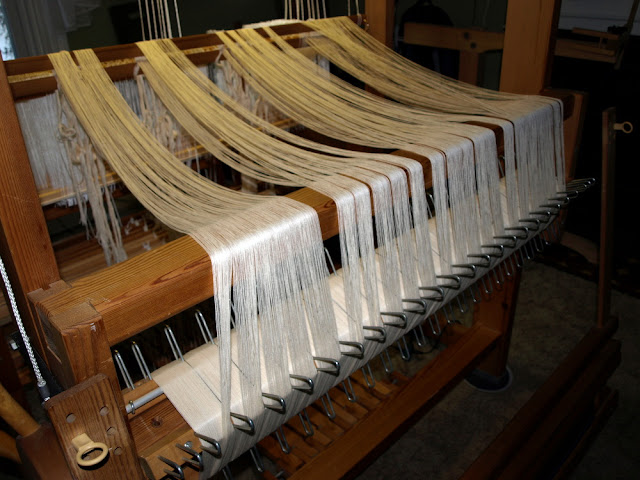 I hope that helps, Peg!  Let me know if you need anything further.

Another small, quick knitting project is done.  I knit this baby hat from some organic cotton that I had been gifted over a year ago.  It's supposed to have a big pom pom, but I don't think I will bother.  The yarn was very wavy and thick, so I used size 9 needles, which is a rarity for me.  It's very soft to touch, though maybe not so warm. 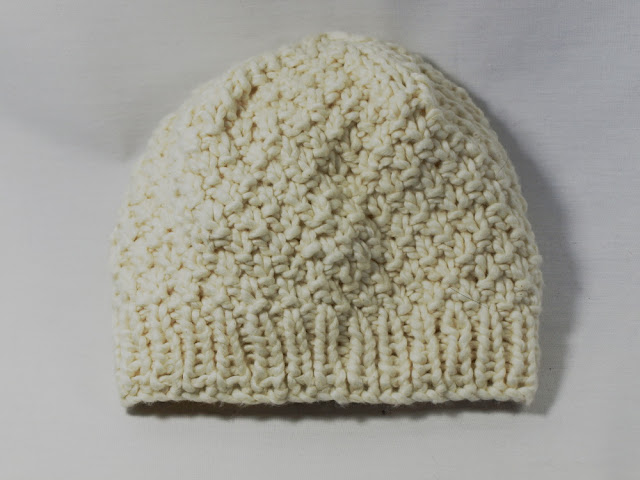 And now, the big announcement!  I have been given the OK to publicly state that I am going to become a first-time grandmother this summer!!  Older Son and his wife are expecting a boy on July 3rd, and mom and baby are doing well.  We are over the moon, and cannot wait to meet him!

The knitted baby mitts and hat are for said baby, but believe it or not, I had planned for this baby blanket warp since last year.  There should be enough for 3 blankets, so one for the baby, and 2 for the shop.  I also plan on knitting a really cute zip-up the back hooded sweater that I saw on a baby recently.  I hope I can do a good job on it, because it was really cute!

Very considerate of them to have a boy, so I can also offer up my Baby Surprise Jacket that I knit over a year ago, in boy colors because that's what yarn I had on hand.

Other than that, I spent yesterday mostly in the kitchen, and one result were these yummy gluten free carrot cupcakes.  I also made a non-dairy cream cheese icing, and they were a big hit! 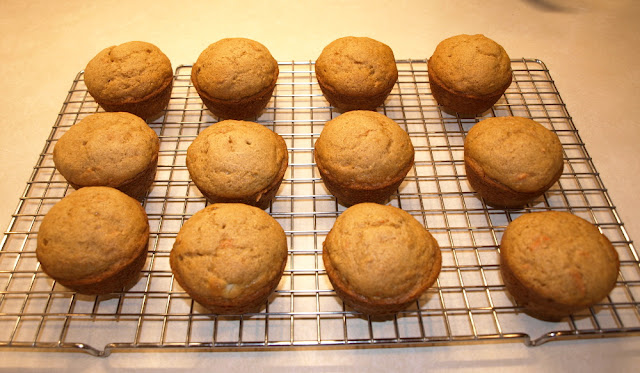 I also made some non-dairy yogurt in my pressure cooker overnight, and it is now in the fridge, firming up a bit.  Tomorrow I will flavor it with a little vanilla and maple syrup and dole it out into individual mason jars.  Yum!