After successfully weaving my first inkle band, I created one that is intended for the reason I picked up yet another hobby in the first place - as a strap for my handwoven clutch wallet.  I used a wrap scrap for the exterior of the wallet, and then used the same yarns to weave the band.  It's nice to have the strap match the purse perfectly, plus the band wove up in a little over 2 hours, start to finish! Who doesn't like a quick project??

I used material from the rainbow wrap that I wove recently 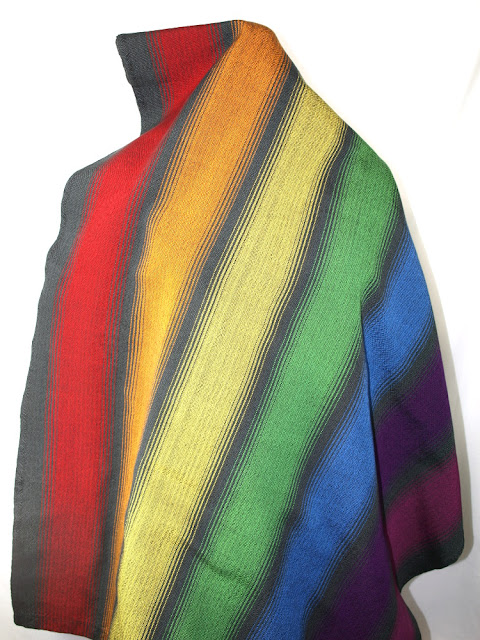 and decided to make the purse purple, so I centered the pattern over the purple and magenta sections. This was the final result; 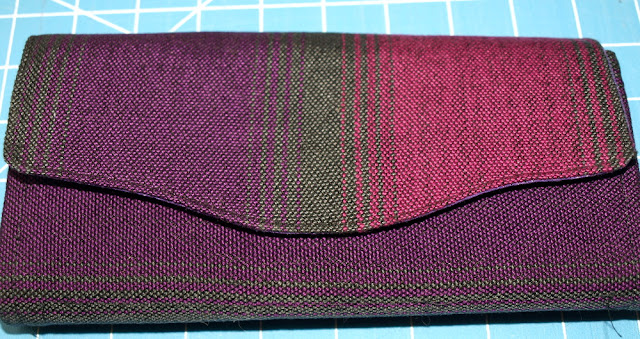 I then warped up my mini inkle loom with the same yarns - 10/2 UKI mercerized cotton in charcoal, purple, and magenta. 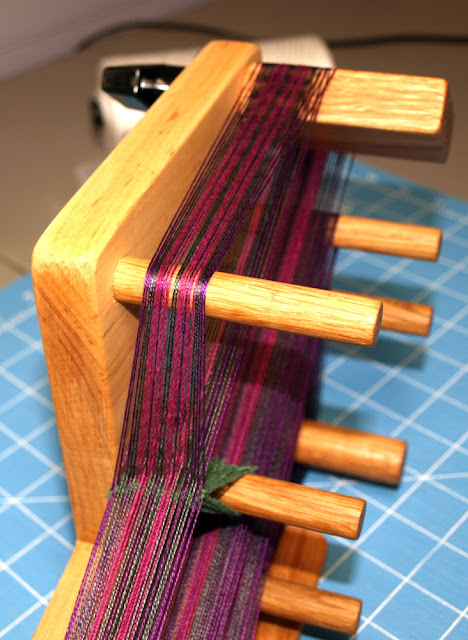 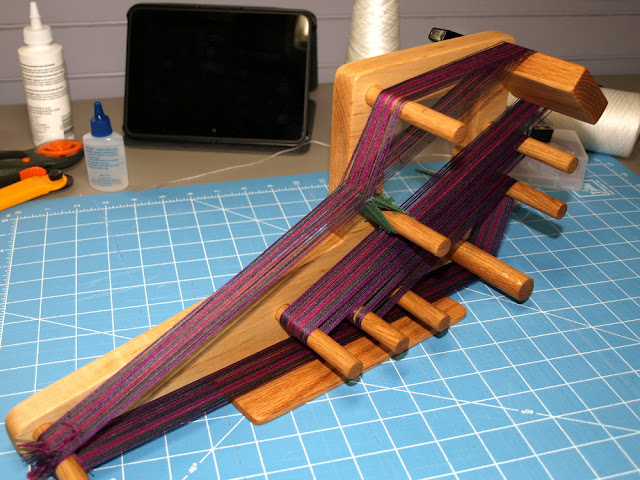 The band came out a bit longer than I needed, and I had a lot of difficulty advancing the warp towards the end.  I even removed the lower, tensioned post, but I still couldn't quit weave the full available length.  No worries, though, since the band was too long anyways.  I used some Fray Check to stabilize the yarns before cutting, and sewed them to some swivel hooks, snapped the hooks onto the D-rings, and voila!  Instant purse/wallet that is small enough to carry yet able to hold everything I need. 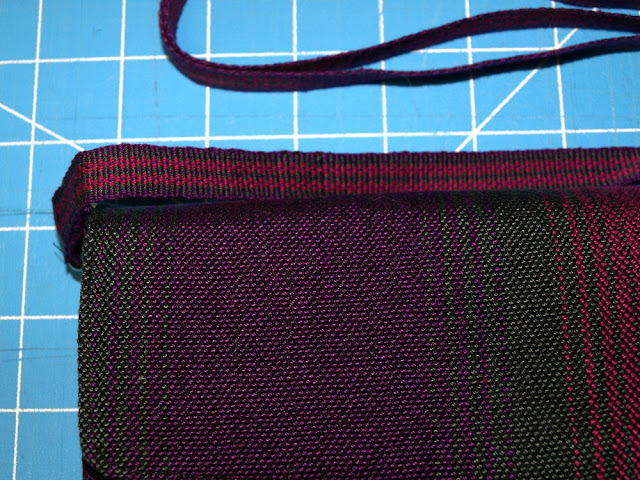 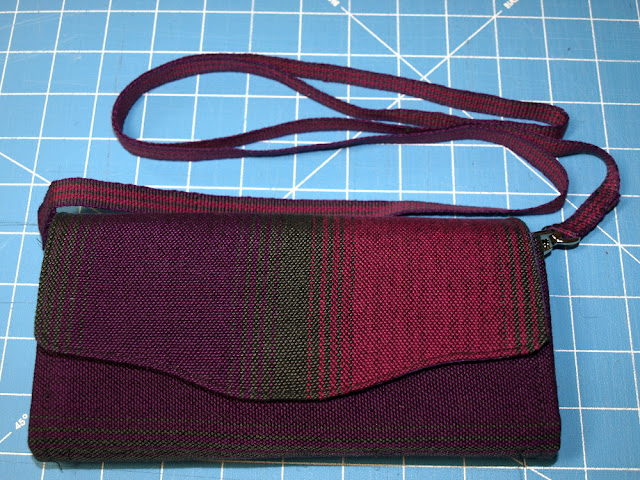 In other news, I haven't been able to weave on my big loom because there's been some sanding on the living room stairs, so I warped up the Baby Wolf for some towels for the craft fair.  For some reason, I was drawn to autumn colors.  You'd think after the long, cold winter I'd be itching to weave summery things, but I had some of these yarns in my stash and wanted to use them.  I chose to weave the draft "Breaks and Recesses" from Strickler's book.  I've admired several weavers works that used this draft, and had wanted to do it for some time. 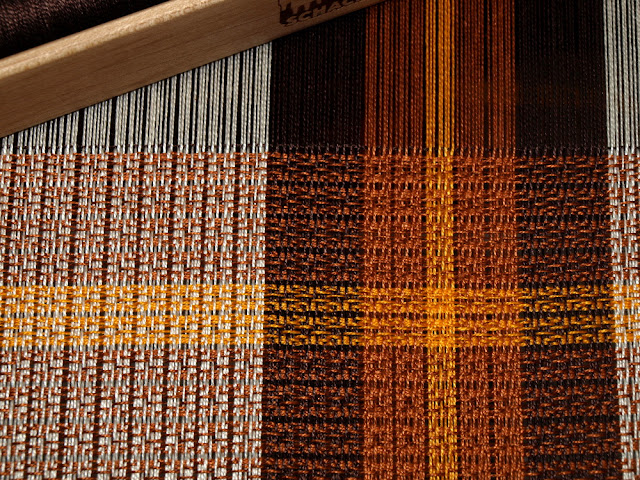 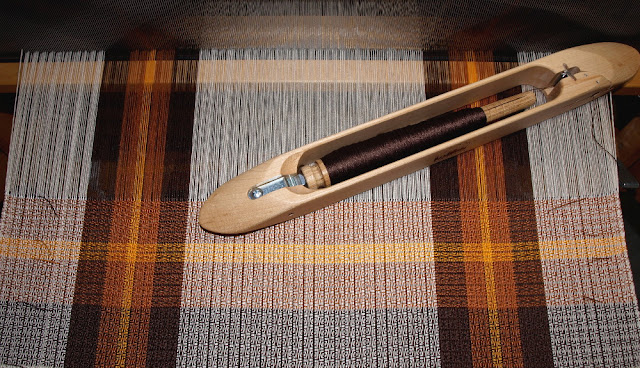 Above is the first towels I wove, and I extended the striping so that it isn't in the same ratio as the warp stripes.  For the second one, I wove smaller stripes. 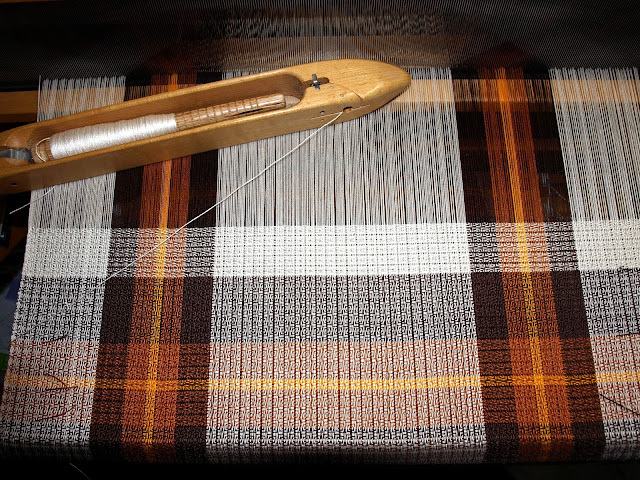 May is drawing to a close, and it has been so very hot here, way above the average, and also very dry. Nothing compared to California, but some of our farmers are having a hard time growing grass for hay, so feeding livestock will be more expensive for them.  I heard on the news this morning that Portsmouth NH is considering issuing a water advisory because they are so dry.  Hard to believe that you can have a winter with so very much snow, and yet be this dry!  It is raining today, but because of the lack of rain, our azalea bush, which usually blooms just before Memorial Day, was a bit late, but very welcomed.  I'm not very good at landscaping/gardening, but this one plant has never failed to please.  Motorists and walkers always comment, and some stop to take photos.  The flowers don't last very long, but are very vibrant.  So I will leave you with this image, taken yesterday, before the damp weather. 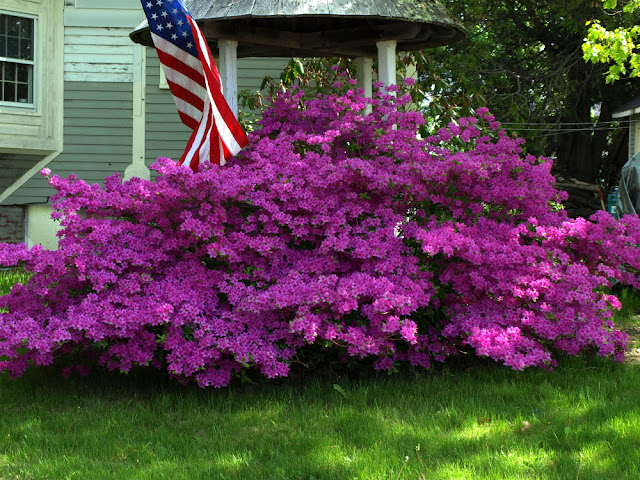