Off and Running, er, Plodding!

Vacation's almost over, and though it feels that I've made no progress, I really have. The Leclerc loom has had it's oil bath, and the heddle bars were wiped down and cleaned.  The heddles, once a mash up, 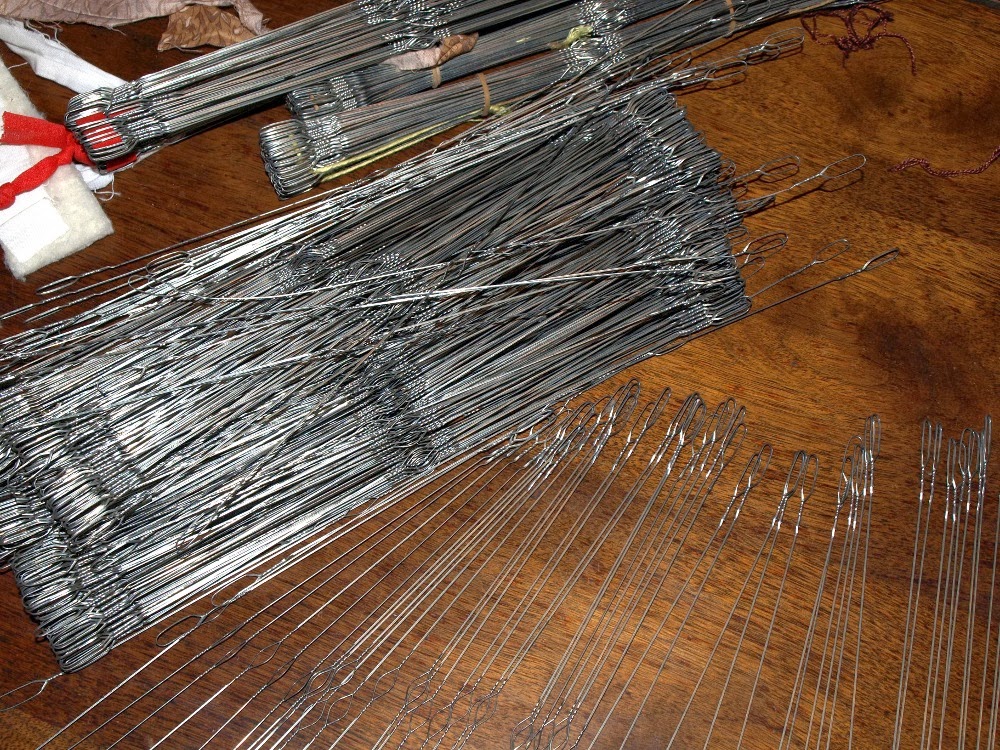 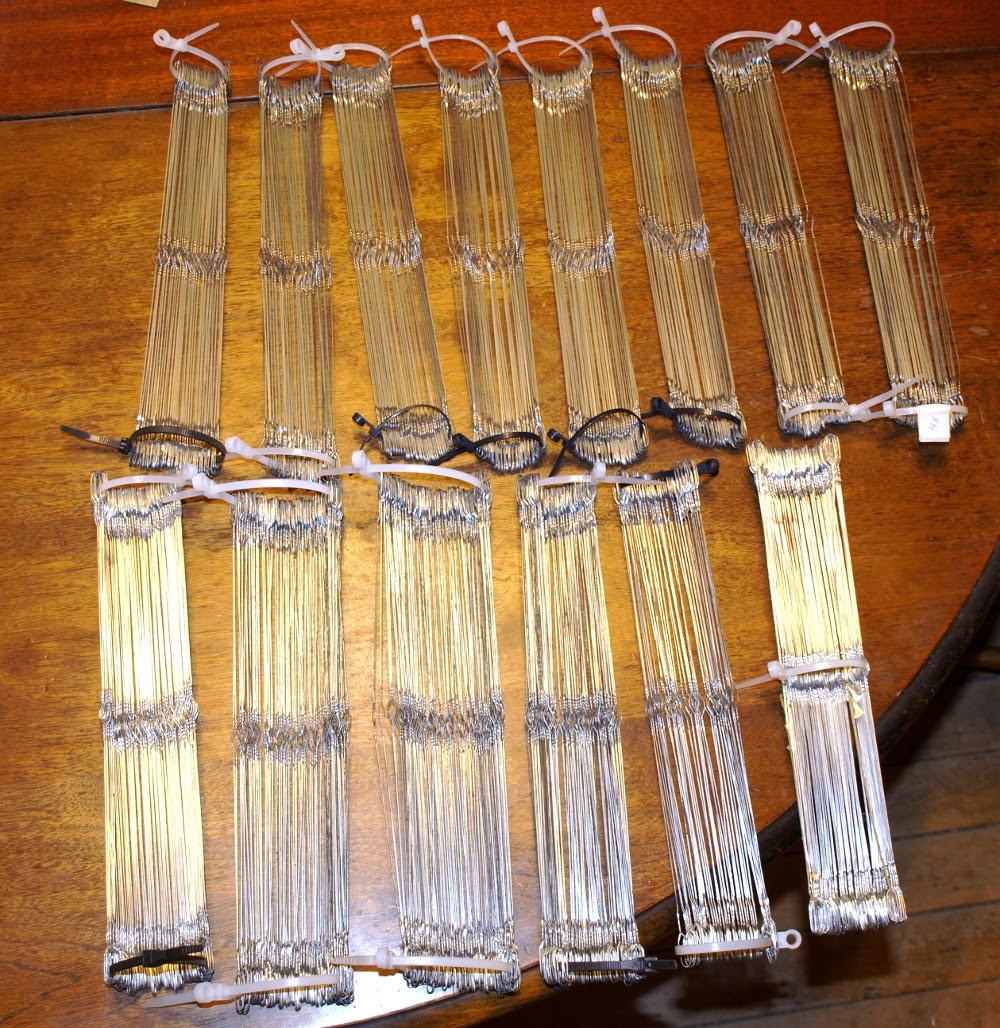 After cleaning, I decided to warp the loom with a "throw away" warp that I've had for quite awhile.  It was a kit, intended to become a bamboo shawl, but when I wound it many many months ago, I had a senior moment and wound way too much, leaving me with too little weft.  I had contacted the company from which I purchased it, but the additional cost for more yarn was too steep for me, so into a plastic bag the whole thing went.

Since I am not set up to warp sectionally, I decided to remove one of the sections and secure it to the beam and use it as a raddle. 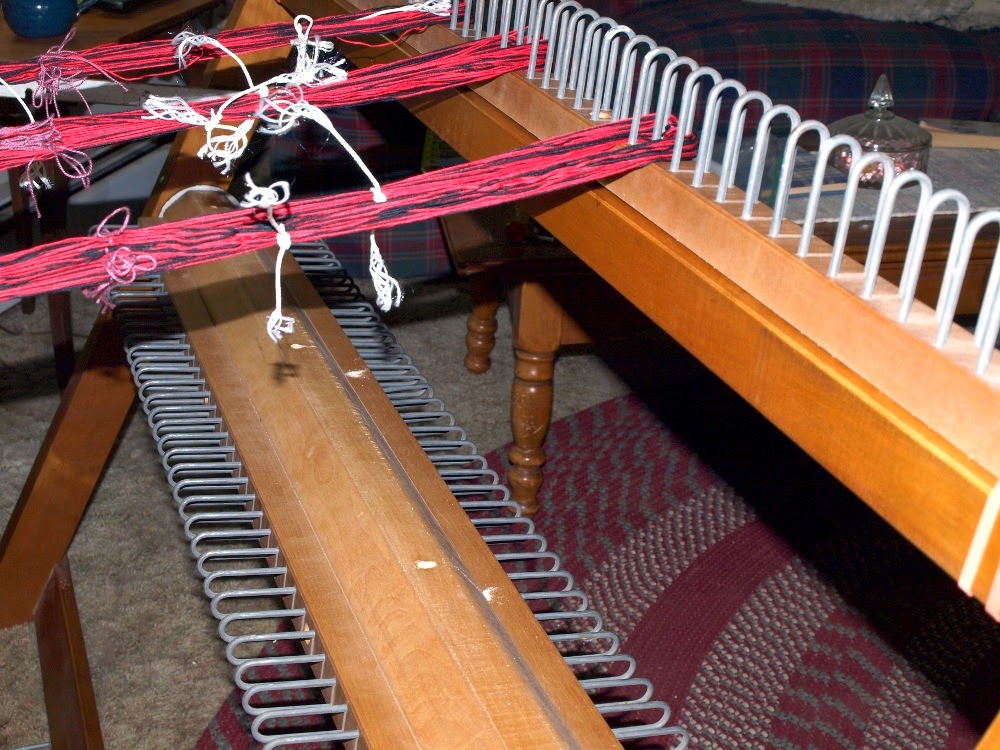 I took the metal bar out from its eye bolt and measured enough texsolv so that I could use it to loop my warp onto. 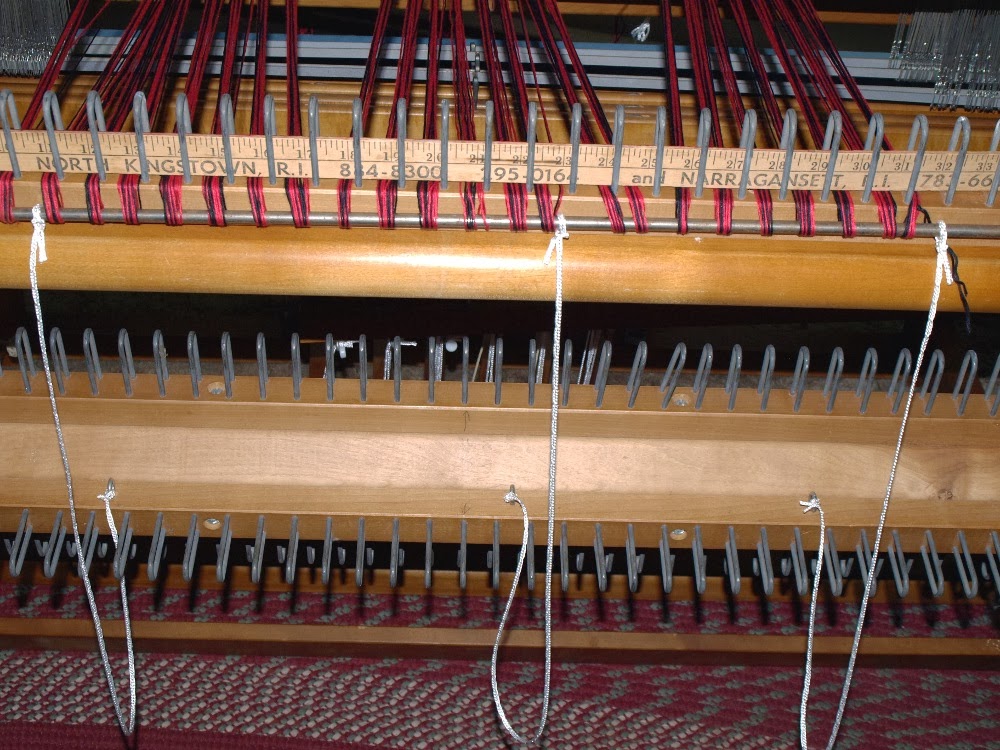 Who knew, but a yard stick works great to hold the yarn in the raddle until you are ready to take it out! 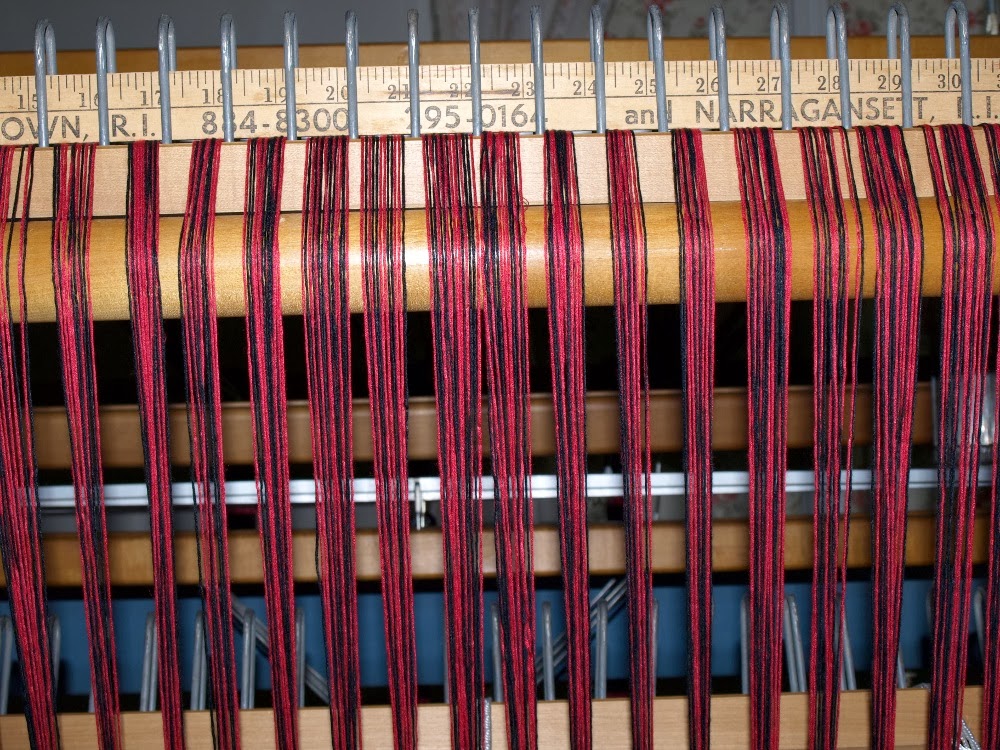 I then rigged up my lease sticks and got ready to warp! 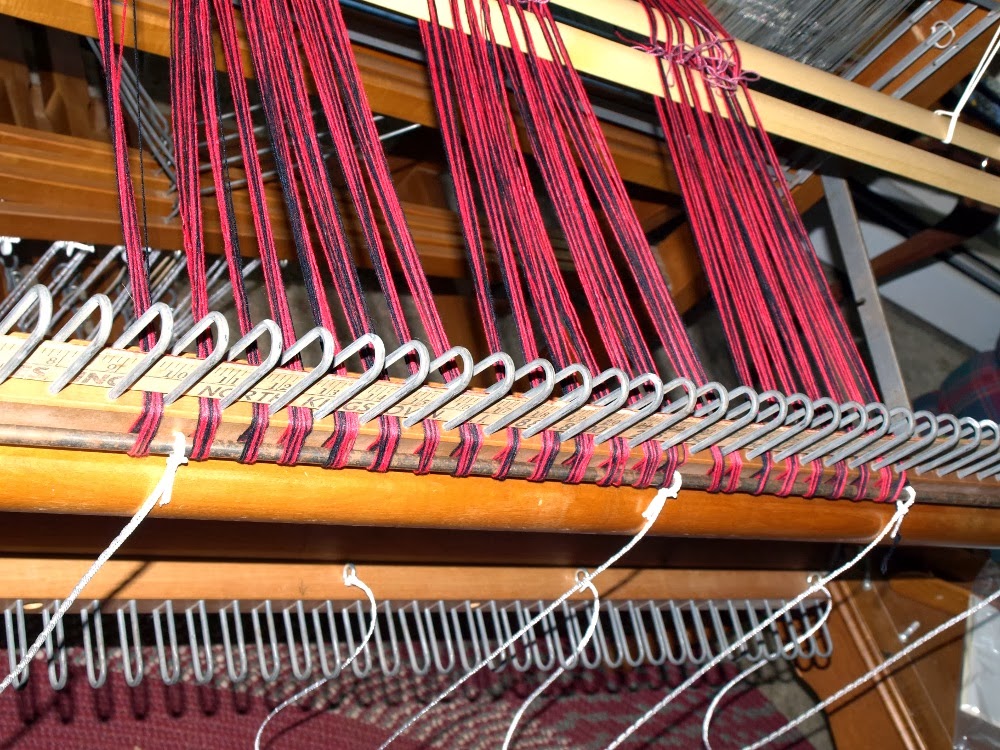 I hoped I had aligned it all correctly, so that the yarn would feed into the other sections correctly, but without a warping buddy to give continuous tension, they did stray side to side a bit.  Hopefully this won't affect the tension, but that's why I'm using this warp - it's going to help me get a feel for the loom. 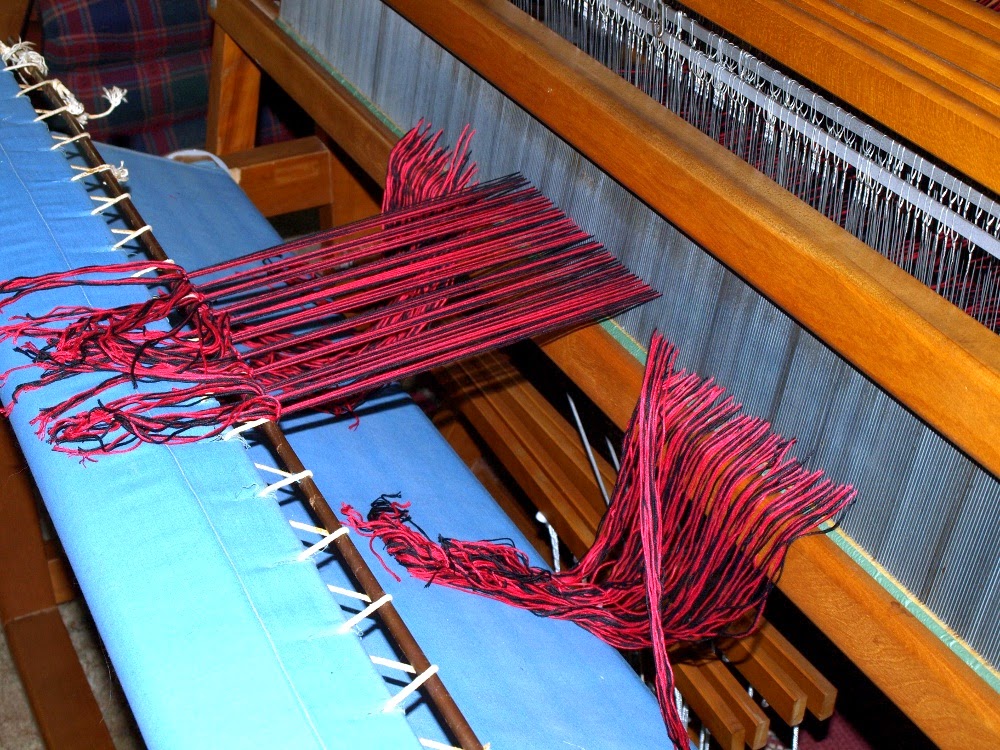 and it is ready to weave!  One question: does everyone lash on when they have an apron and rod like this?  I tied directly on, since that is what I'm used to on the Baby Wolf, but it is hard to work the yarn around that rod while it is so close to the apron. I used to lash on, but always had trouble getting all of the yarn to an even tension. Any advice would be much appreciated! 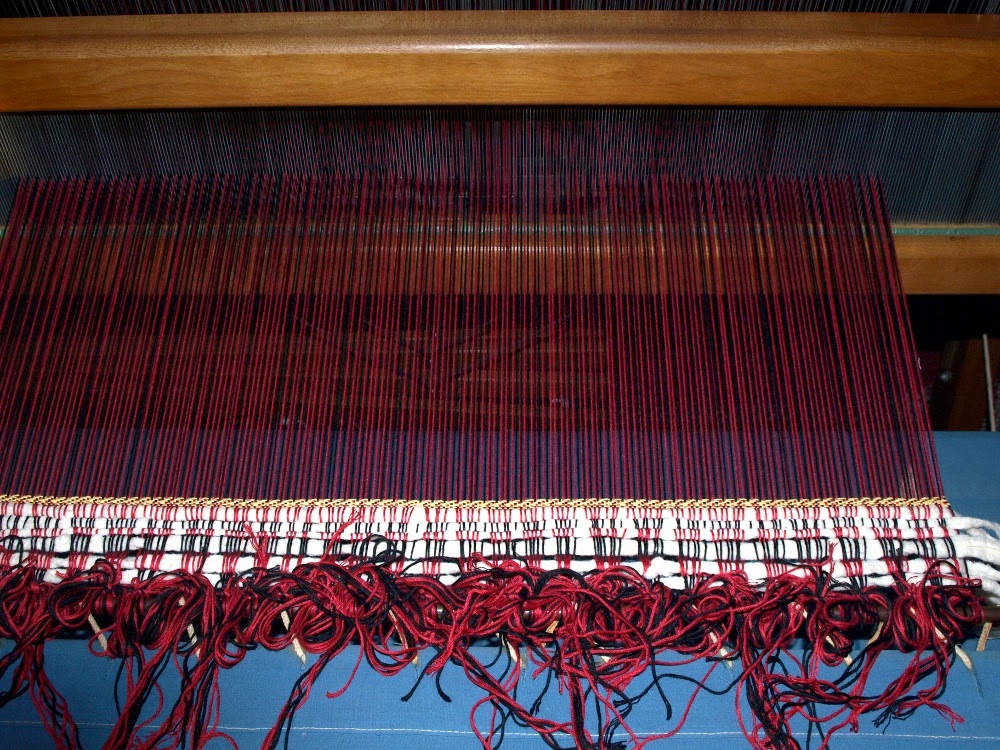 I've also completed two knitting projects, and yes, I did clean the house.  It's been so cold here that I've not set foot outside except to get groceries.  I was really hoping to get some walking time in during this break, but I'm not that hardy.  It's snowing at present, but we are supposed to FINALLY warm up a bit this weekend, even though rain will accompany that warmer air.

On a lighter note, it seems that it is the thing to do to name your looms.  I never have, but I've never had more than one loom before, either.  I'm lacking inspiration, I'm afraid. All I can think of is the loom's model, Fanny.  I can hardly go around saying, "I'm working on my Fanny today," or "my Fanny is warped."  There would be no end to the hilarity, I'm sure.  Any ideas??