After much ado, I've finally gotten a good start on my Gothic Cross towels.  I'd decided to measure a 13 yard warp, enabling me to weave 12 towels.  Measuring the yarn on my warping board was uneventful, but apparently the warping gremlins came out at night and were up to mischief, because when I tried to get the yarn on the loom, uneven tension abounded.  I ended up having to advance the warp ever so slowly, and combing the yarn with my fingers, which I know is a huge no-no.  I finally got the yarn on the loom after many hours of frustration, but some bouts were longer than others.  I'm waiting for the other shoe to drop, and to come upon a clump of untensioned yarn as I weave.  Oy.

Here is the loom with the warp wound on - I used 8/2 bleached unmercerized cotton from Halcyon. 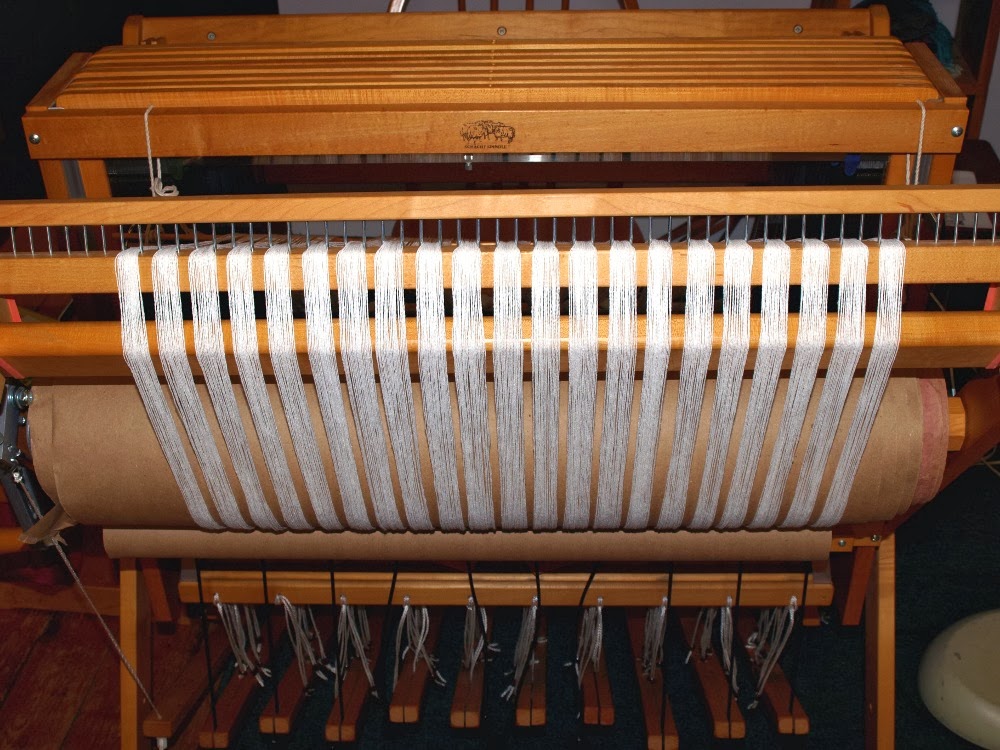 And from the side, 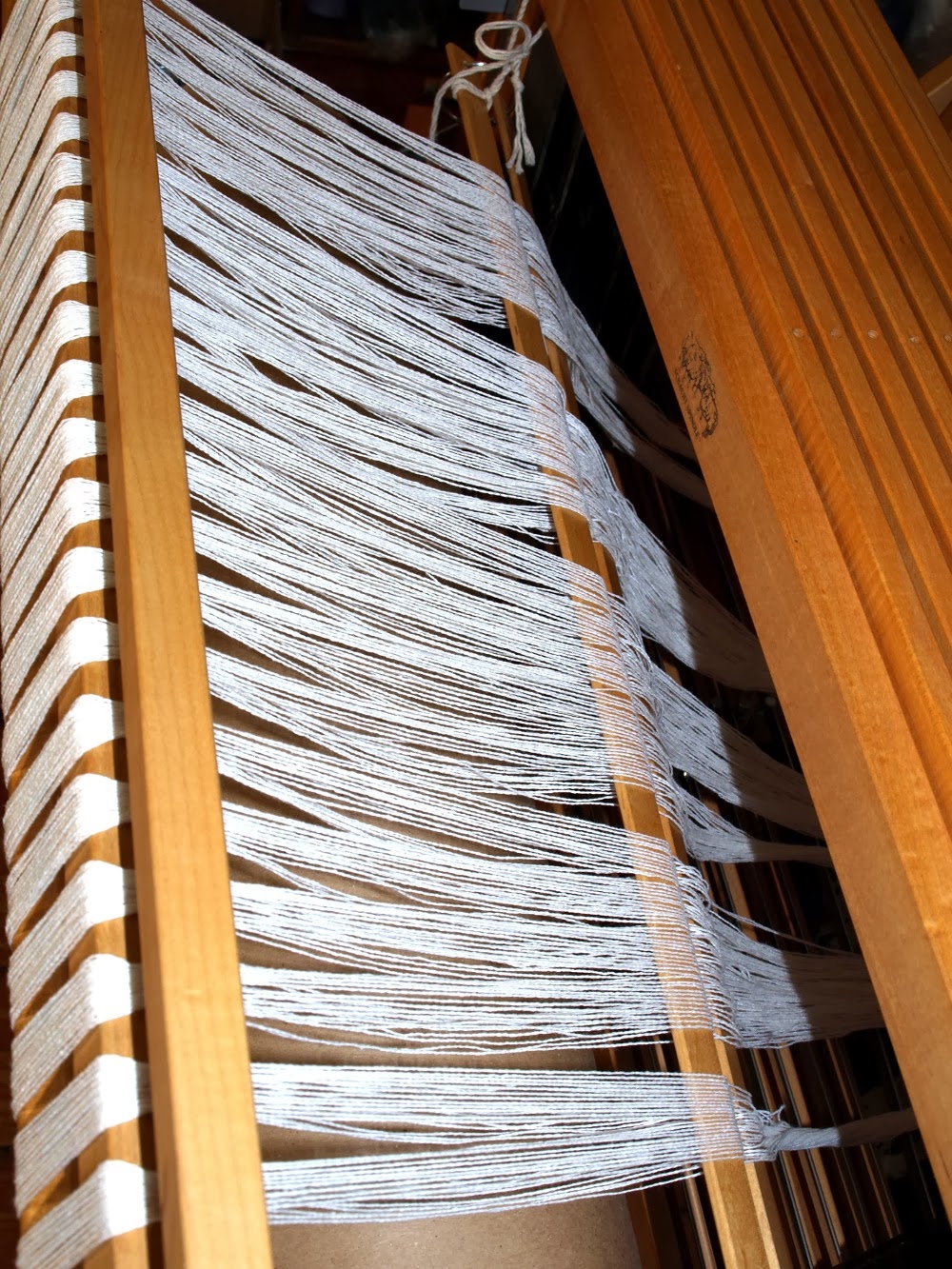 I got no pictures of the unevenness, because it was all just too heart breaking.

Since dressing the loom, I've managed to weave 4 towels in 2 days, which is probably a record for me. The pattern I chose is Gothic Cross from "A Handweaver's Pattern Directory."  Believe it or not, I only purchased this book recently.  I knew it was the "bible" for 4 shaft weavers, but I didn't own it until I had seen so many wonderful projects on Ravelry from this book.  I'm so glad that I got it!

The first 4 towels are woven with a tan weft, which I started after a small sample in lavender to check for errors. 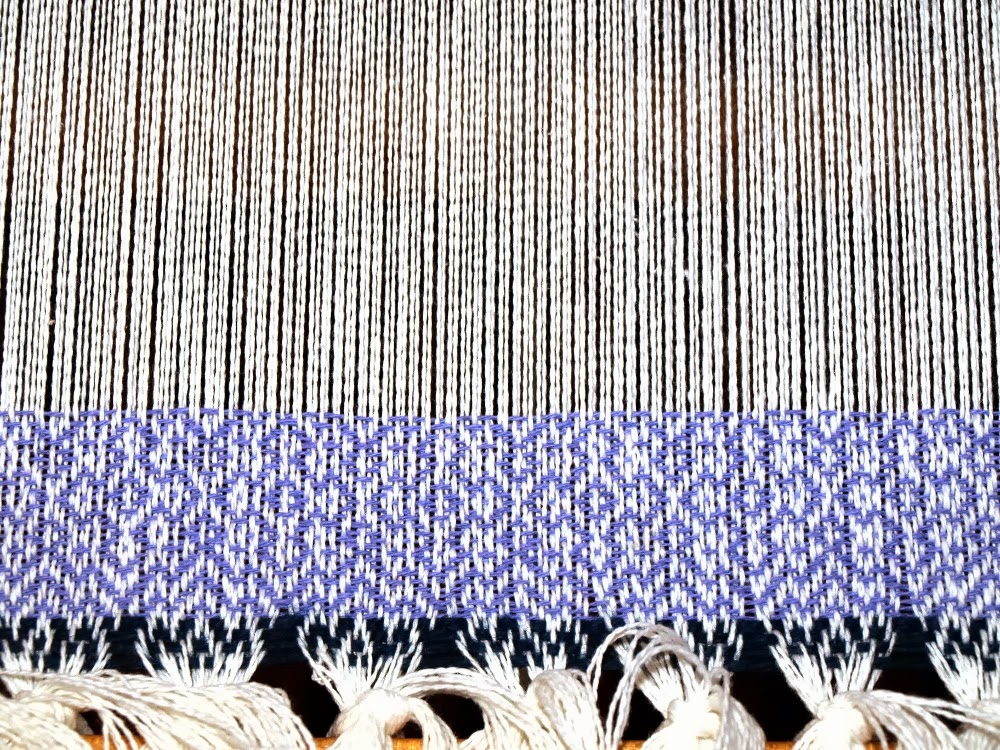 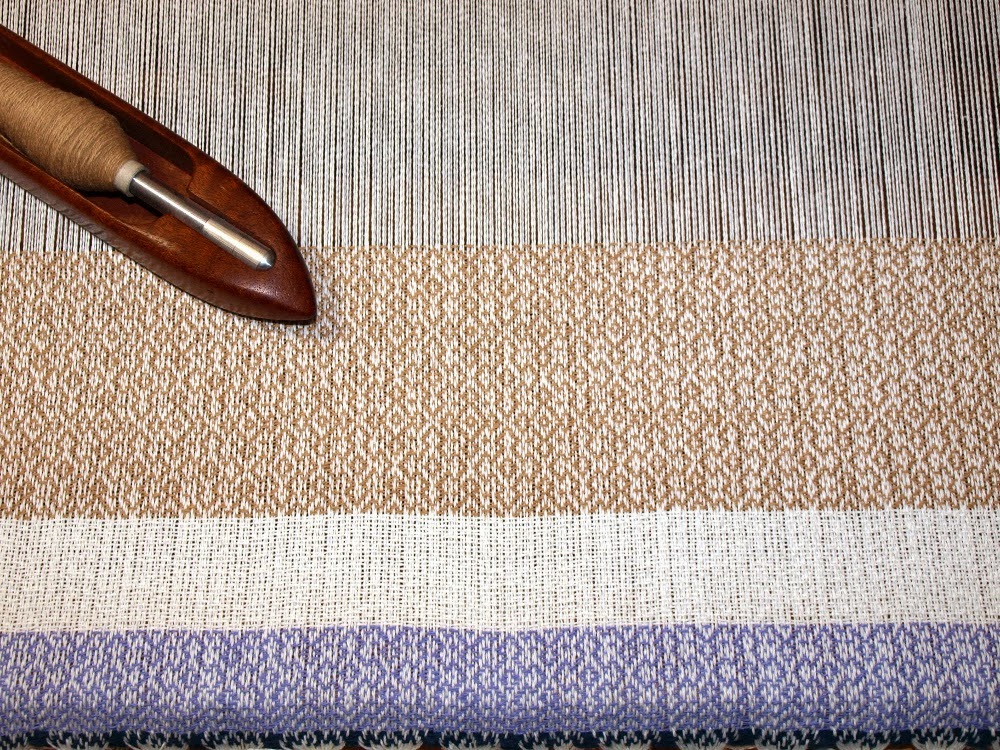 I plan on leaving a small bit of the white hem visible on the front.  This is also the first time that I've woven the hem in a repeat of part of the twill pattern instead of tabby, so we'll see how that washes up.

The next set will be woven with a light blue cotton/linen yarn, another first for me. When I bought my Baby Wolf, it came with a kit including spools of cotton linen in natural, pink, and light blue, but no draft.  I tried to find out what draft it was supposed to be for, but had no luck, so it has been sitting on my shelf for years, waiting patiently.  Pink is not my favorite color, so no ideas on that one yet.  As for the last 4 towels, I may put a poll up on Facebook with choices from my stash, so check back!  Personally, I like the lavender, but I only have part of a mini cone, so I don't have enough for four.  Or maybe I should weave each a different color... Who says towels have to come in sets?

On another note, there is a seismic shift coming to my life in 10 days.  After 19 years, I am going to the day shift.  This was supposed to happen late next spring, but things changed and I'm going a lot sooner than I thought.  I have 6 days to recover from 3 12-hour night shifts and get used to getting up EARLY!!  I'm sure it will be fine, but it feels impossibly different right now, and I'm quite nervous about it. I also have to work more hours, so that means less weaving time, but health-wise, I think it is the right move.