Sorry I've been missing, but I really haven't had too much happening that was picture/blog-worthy.  At least I don't think so.

Maybe this prolonged heat and humidity that we've been having most of the summer has something to do with it.  I just don't function well at the weather extremes, and this summer has been one of the hottest and definitely the most humid on record. 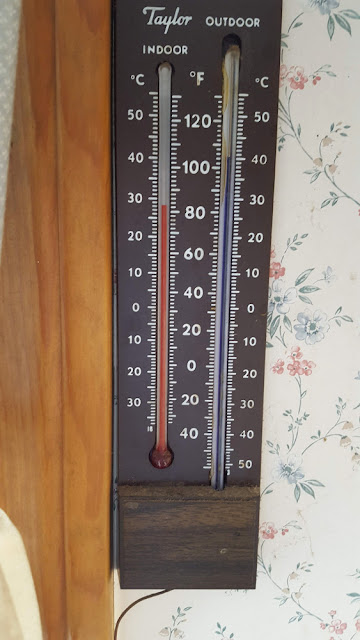 Yeah, I know.  Who still has these really, really old indoor/outdoor thermometers anymore?  Anyway, the heat really just sucks every creative juice that I possess right out of me.  I can't wait for fall.

Here are a couple of shots of my older son and his wife's rock garden right outside of their front stairs.  I took them several months ago, trying to figure out what these pink flowers were, because they bloom all summer.  I now know that they are perennial geraniums of some sort, and they proliferate a ton, so unless I up my gardening game, I'd best avoid them or they would take over the whole garden.  Pretty, though. 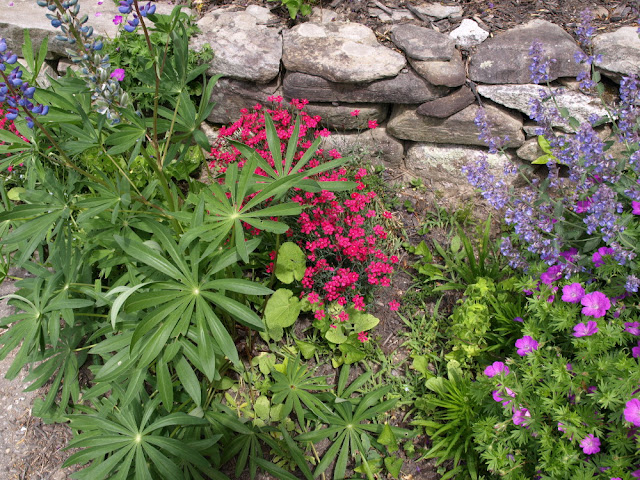 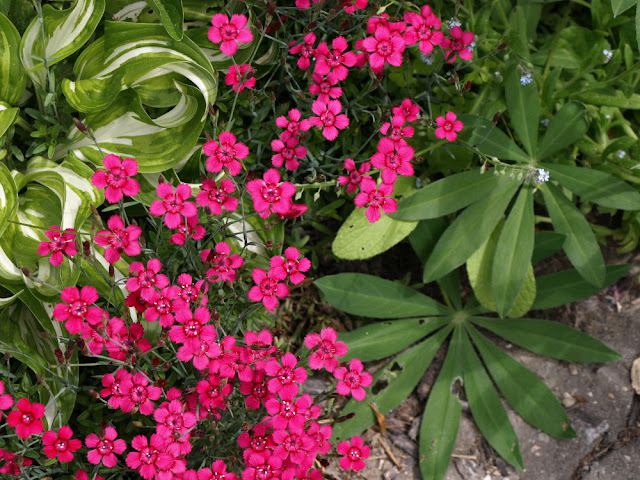 In that vein, after finishing the project that cannot be shown yet, I picked up my circular knitting needles and decided to finally get back to sock knitting.  I don't think I've done that for at least a year and a half, and I was very happy to start a new set.  I got the yarn from Knit Picks quite awhile ago, but don't remember the specifics at the moment.  I had a couple of my old pairs develop holes last winter, so I really need to get these done!  I'm past the dreaded heel and back to easy knitting! 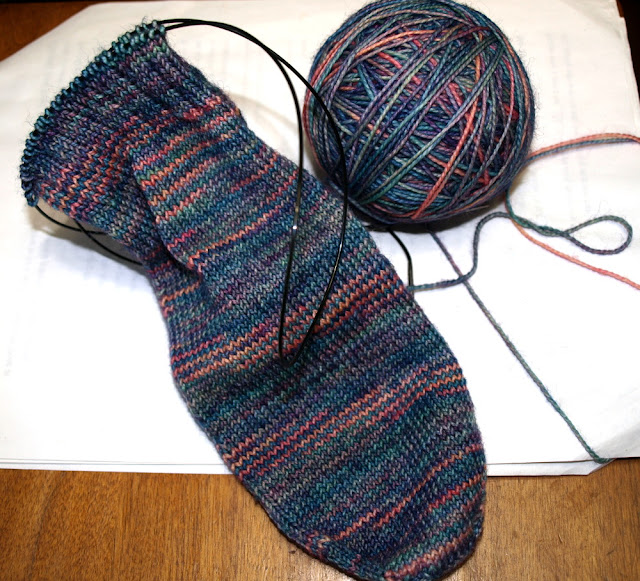 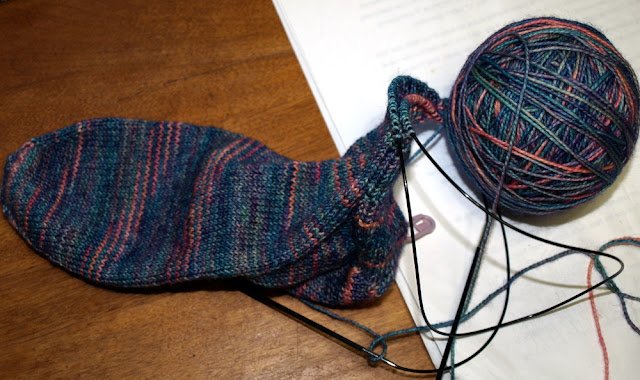 The other loveliness that I've been dealing with this summer is much less pleasant to look at.  I had my first official skin check at a dermatologist's office.  I made the appointment because there has been a small pink mark on my nose for several years, and since I had quite a few bad burns as a kid, I thought it might be pre-cancerous, like the one I had frozen off my upper lip several years ago.  I was correct, and was anticipating having the same treatment, but was talked into using the chemo-cream that I've heard so much negativity about.  Two weeks of twice a day, two weeks off, then two more weeks.  This is what it looked like after only one week; 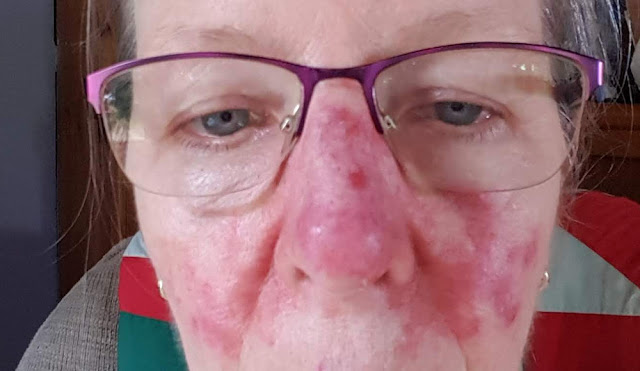 It got a bit worse, including the fact that I couldn't wear my glasses for very long because the skin under the nose pads got paper-thin and very tender.  Washing my face felt like being stabbed.  It was pretty awful.

I'm now almost two weeks without the cream, and though some pink remains, and there has been a lot of peeling, my face seems almost back to normal.  Just in time to start the cream back up again.  The first time, I was on vacation, so didn't really have to explain to patients why I looked so bad.  This time, there will be no hiding.  Ugh.  I know, better in the long run, but ouch!

Today, after several months (!), I finally started weaving again!  I've had a black silk warp all ready to weave for a very long time, but only now could I make myself start up again.  Overall, it was fun to get back to it.  The treadling was easy to remember, and the pattern, which I borrowed from a very interesting post about twills on the Thrums Textiles blog, is ultimately going to be two infinity scarves.  The colors are a bit washed out in the photo. 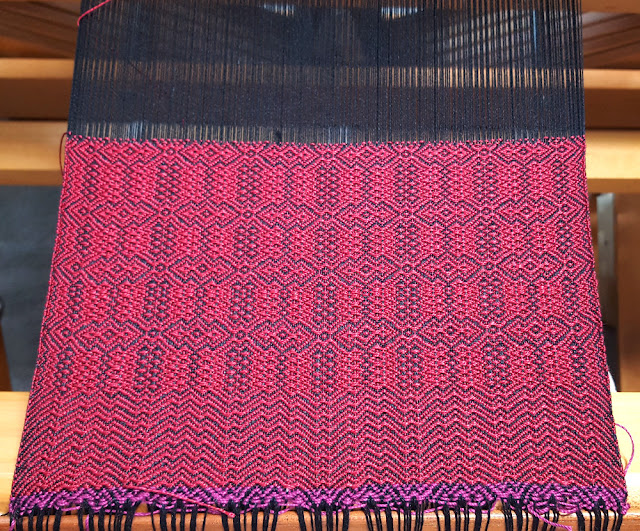 I think the reverse side will be the one that shows on the finished garment.

I'm still spending time every day that I'm not working working on my fiddling.  I still think that I've lost quite a bit since the camp in June, but I'm determined to keep plugging away until the next opportunity to learn comes around.

Oh yeah, and then there's this guy; 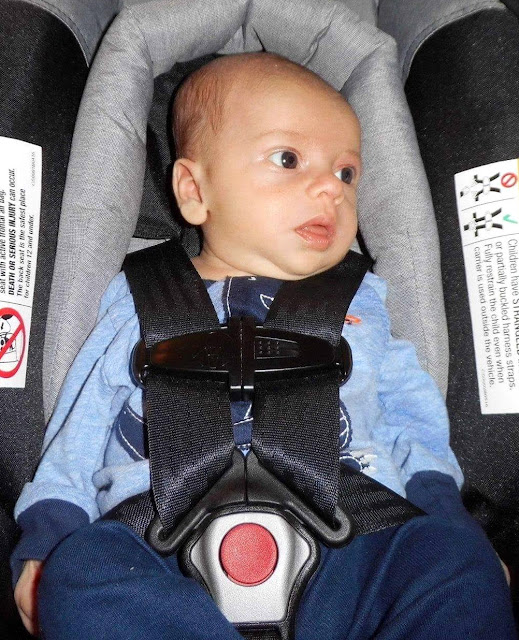 His poor mommy has to return to work in a couple of weeks, so I'm going to watch him on Wednesdays and his other grammy will watch him on Thursday.  I'm really looking forward to getting to know him better.  He sure has changed since this photo, when his parents were looking to keep him warm and tried the sweater that I knitted for him. 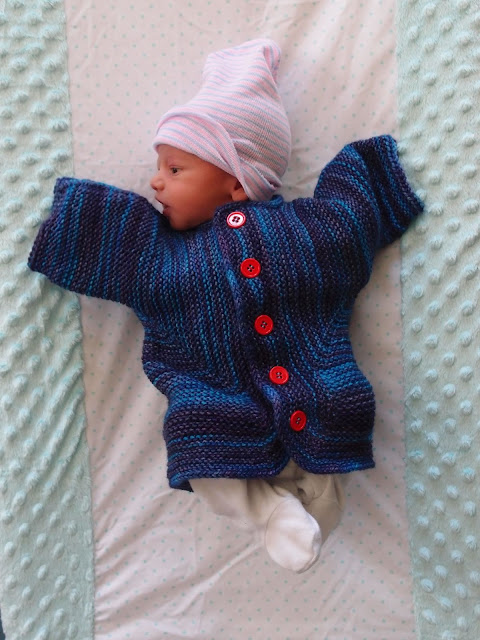 That's all for now.  As the weather cools, I'm sure I will be more regular about blogging, so thanks to those who have stuck around!