Our family has had a tradition, thanks to our younger son, to gather for an outdoor "adventure" at the end of every summer or early in the fall.  Our usual is to hike up Bradbury mountain.  It is always a wonderful afternoon, as the mountain has many trails of varying difficulty, as well as a nice picnic area at which we enjoy our lunch before our hike.  The views from the top are lovely, and after we descend, we often gather at Son #2's house for refreshments and conversation.

This year we came up with a different plan, due to the baby and all his parents would need to carry to bring him along.  We decided to visit Pemaquid Point Lighthouse Park.  It was one of those days when the clouds and sun competed, there was a cool wind, and not too many other folks around - in other words, pretty perfect!

The park is owned and run by the town of Bristol, and consists of the lighthouse, a smaller tower, and the keeper's house, the downstairs of which is a small museum.  The upper part of that building is an apartment that can be rented.  There is also an art gallery and a learning center, which we did not get to visit. 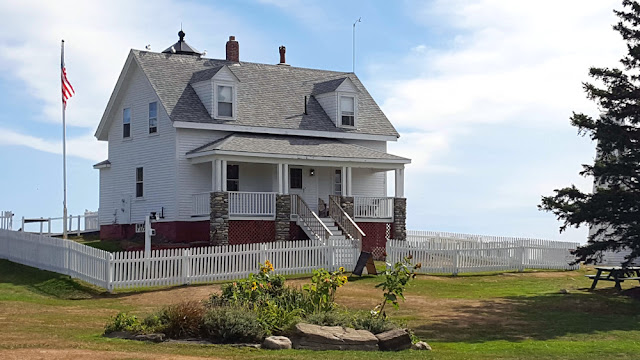 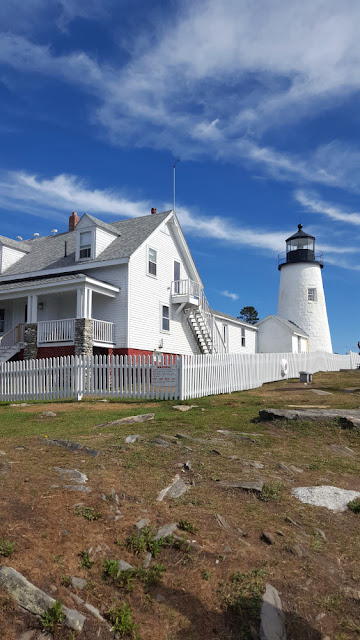 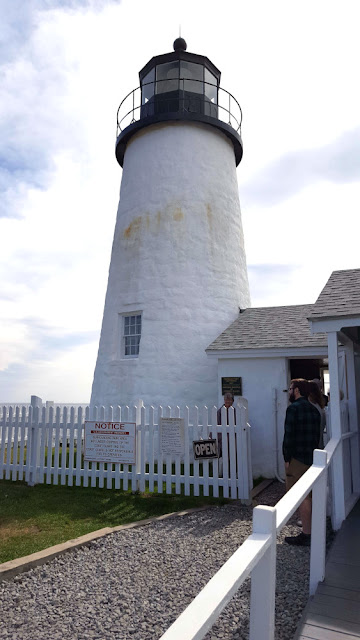 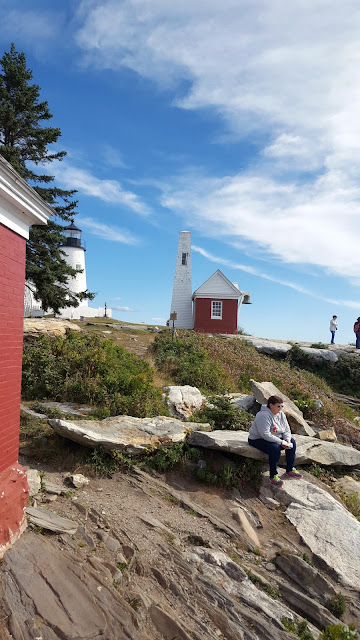 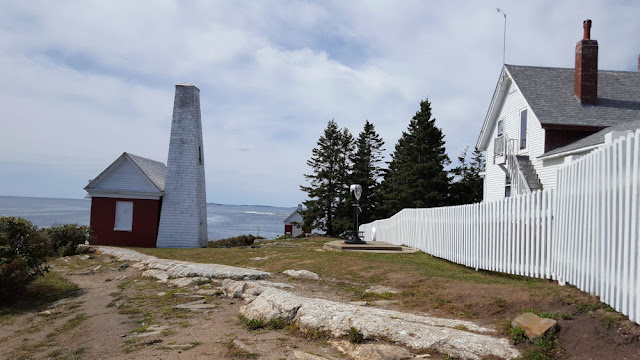 Groups of 4 are allowed to go up to the top of the lighthouse.  There is quite a view from there, and the spiral staircase leading to the top is spectacular. 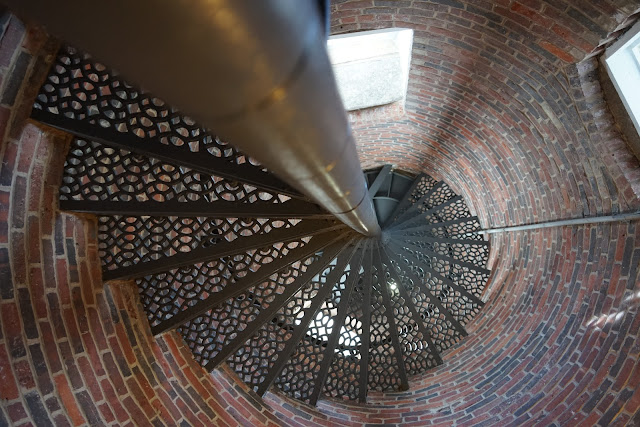 This is Hubs from the top, 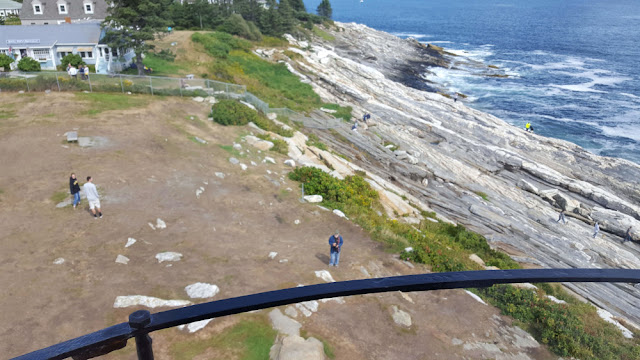 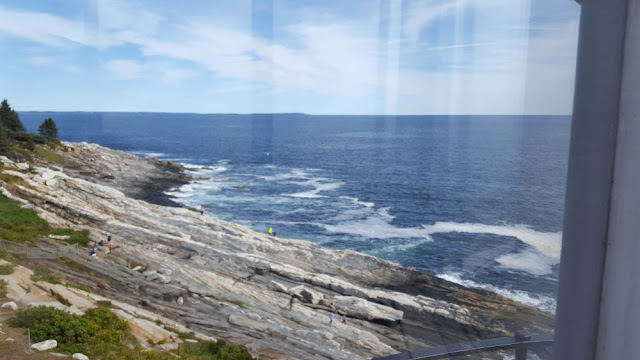 One of the notable points of interest here are the wonderful color striations in the rocks themselves.  The combinations are endless and really fascinating! 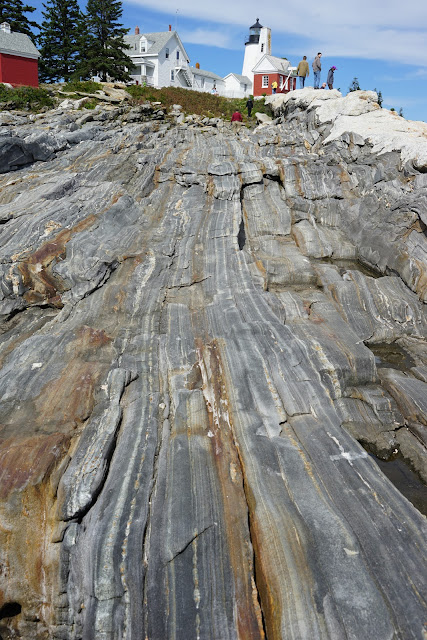 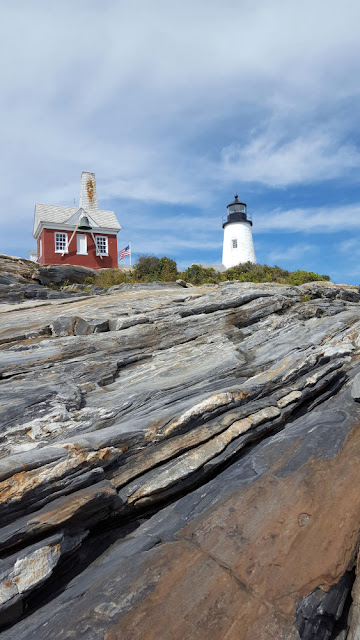 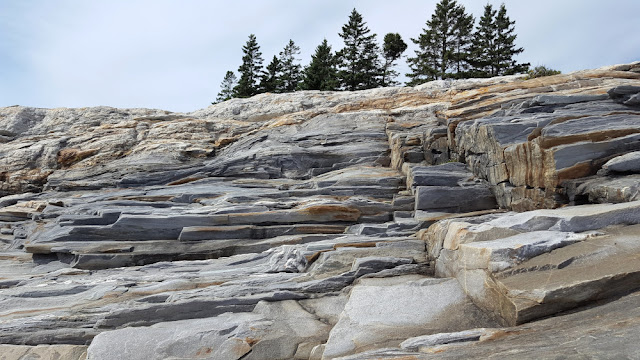 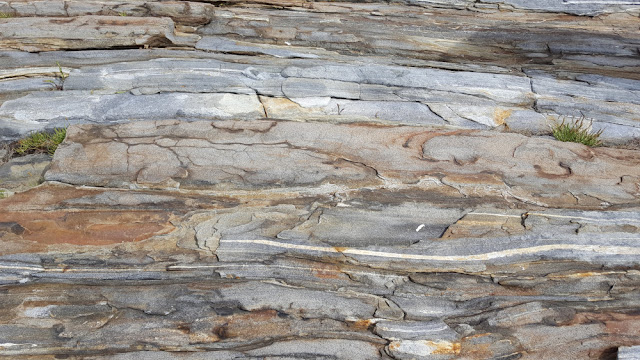 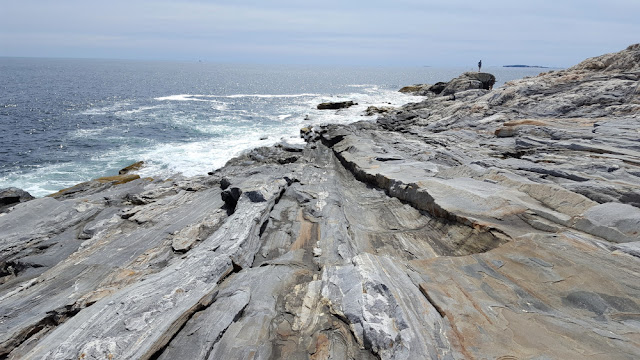 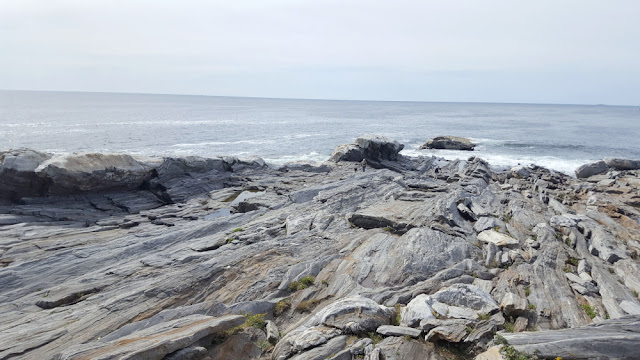 There were several signs warning everyone about the dangers of getting too close to the water, as lives have been lost.  Even on a relatively calm day like this one, one can imagine that happening quite easily as the waves were crashing on the shore. 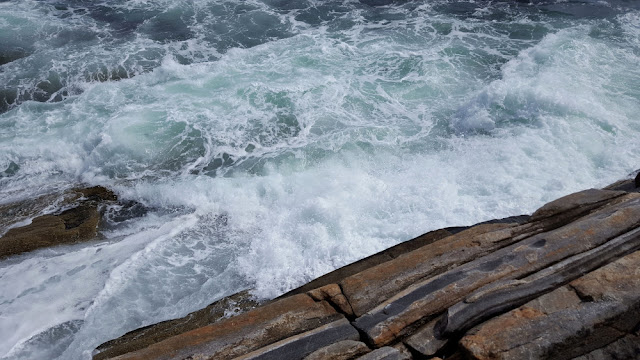 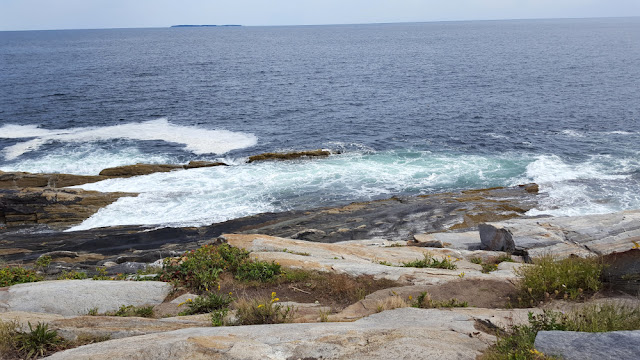 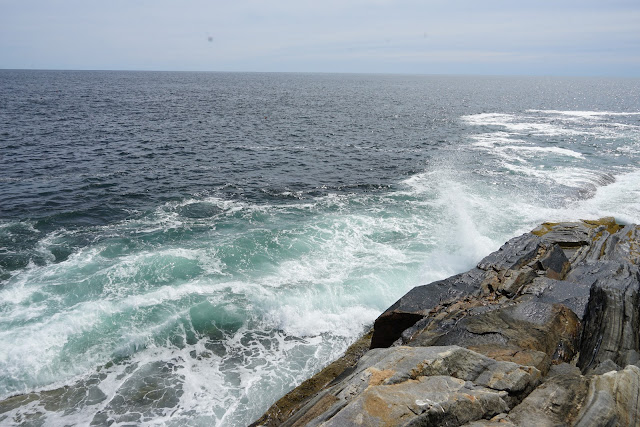 There was also a rather large grouping of ducks in a cove when we first arrived.  Later on, some ventured to the ocean side in search of food. 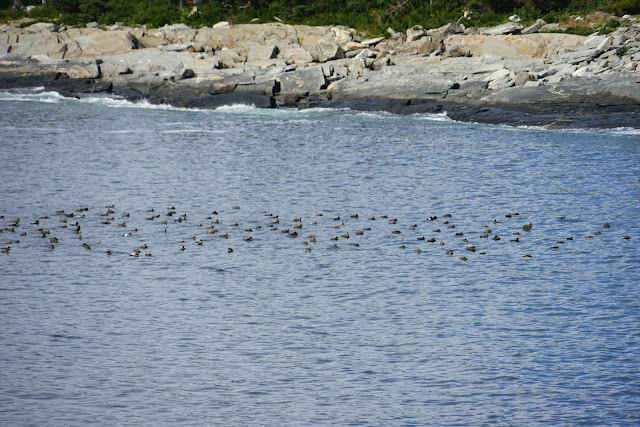 They also have a few gardens on the grounds, which this time of year mostly show sunflowers and some pink plant that none of us were familiar with. 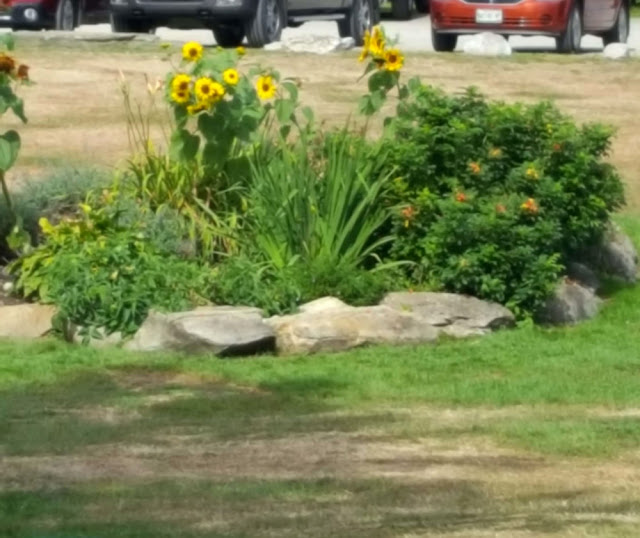 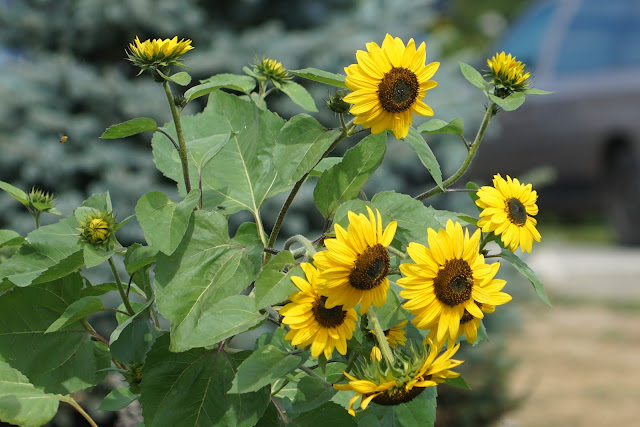 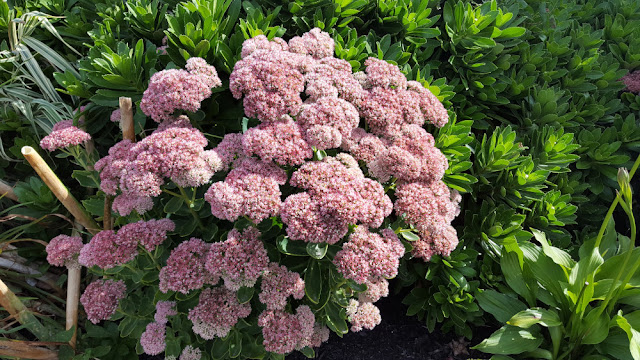 Sons 1 & 2 spent some quality time on the rocks, doing some bird watching and solving the world's problems, no doubt; 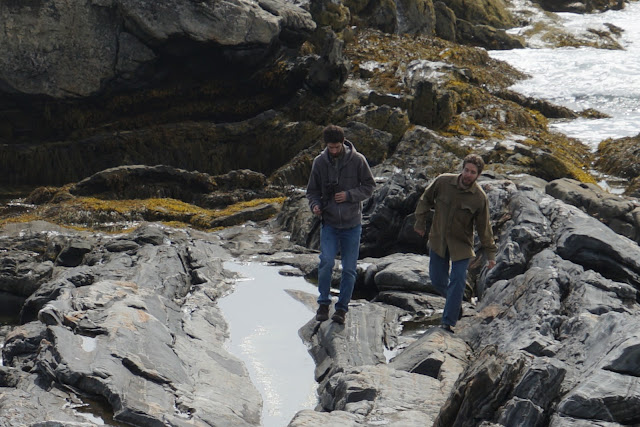 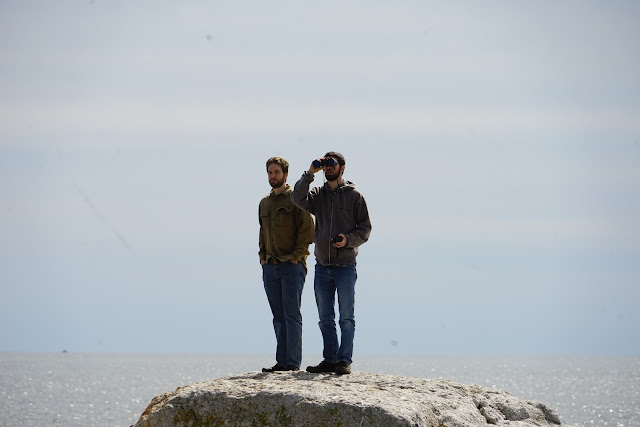 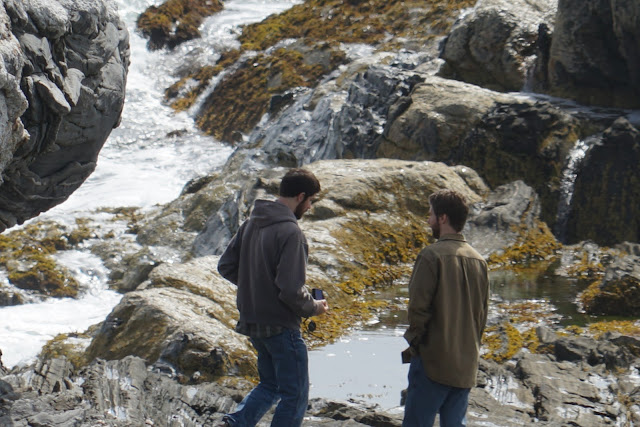 Setting up for the picnic; 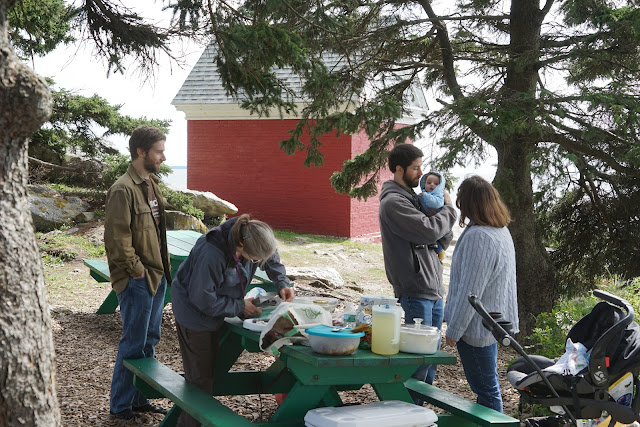 I also got to have a little stroll and snuggle with the Little One, after which he fell asleep with his mama. 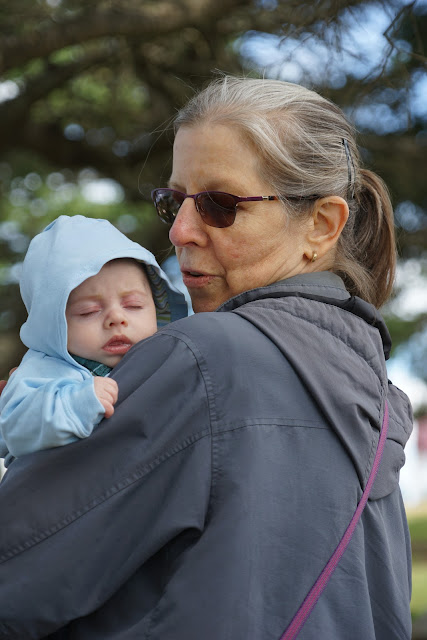 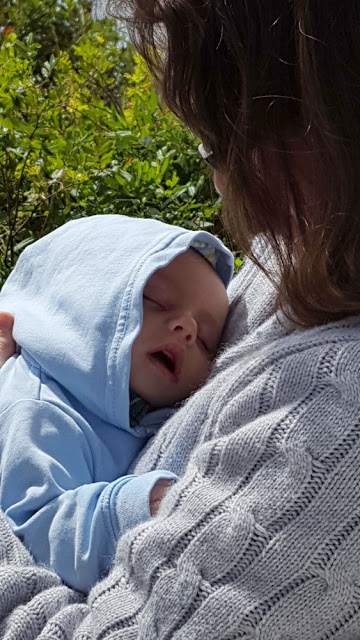