We live in an old house, built ~1875, and through the years have had a couple of experiences that are hard to explain.  They happened at night, and in the light of day it always seems like there is some explanation that makes sense.  Also, I live in a family of skeptics, so explanations always make sense to them!  Me, I struggle with whether or not there is anything after death.  So I thought I would share our latest occurance and see what you all think.

First, a little background.  Our living room is directly below our bedroom, and my big Glimakra Standard is there.  My current warp is on this loom, and sometimes when I weave, I like to listen to music or podcasts through my little Amazon Fire tablet.  When I am going to take a break, I usually pause the playback, then manually turn put the tablet to sleep with an actual button on the side that I push.

Two night ago, my hubby was awakened by music at 2 AM.  I sleep with a white noise machine (a holdover from my night nursing days), and he initially thought that the sound machine had picked up a radio station.  As he woke up, he thought it was coming from somewhere else in the house, so he got up and crept around - I was apparently deeply asleep.

After determining that it wasn't coming from the upstairs, he went downstairs and started to go through the living room towards the rest of the house, when he realized the music was playing near my loom.  Lo and behold, the tablet was on and playing my playlist on my Pandora app.

Now, hubby is not a tech fan, and so does not know how to use the tablet.  He was pushing the button, unplugging it, touching the screen trying to figure out how to stop the music and turn it off.  He finally got to the screen where he could shut down the app and so stopped the music and went back to bed.

When he told me this the next day, I was incredulous.  I have been using that tablet for a few years, and it has never turned itself on at any time of the day because you have to press an actual button.  I have no explanation as to how this happened.  I'm pretty sure our cats cannot push a button on the narrow side of a tablet, then sweep upwards on the screen to unlock, then push the "play" icon on the Pandora screen!!

One more little tidbit of information about our house., which we purchased in the 80's. The most recent owners had four children, 3 boys and a girl.  The girl, Tammy, died when she was 7 or 8 years old.  She had scrawled her name on the plaster walls inside my younger son's room with crayon at some point, so we know which room was hers.  Was this Tammy playing a little trick on us? 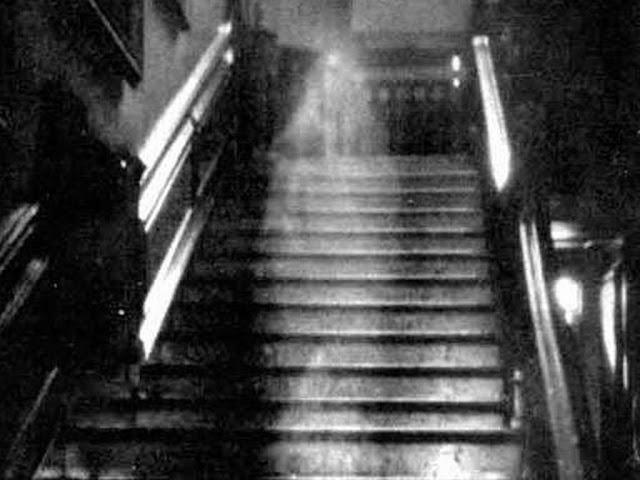 The other significant occurrence happened a long time ago, when my younger son was a toddler who was at the babbling stage.  One night I was awakened by a small child's voice, speaking quite clearly, saying a couple of sentences.  I remembered the phrases for awhile afterwards, but do not any longer.  It could not have been from my older son, as his bedroom was at the other end of the house, and my you  nger son could not speak clearly yet, but it sounded like it came from his room.

The other occurrence was less dramatic, but also took place in that room.  The room's ceiling light somehow turned itself on one evening.  This happened after my kids had grown and moved out, so there was no one in the room.  The light is activated by a switch on the wall, too high for cats to reach, if they'd been in the room to begin with, but the door was shut.

So somehow my family always poo-poos these, saying that there are no such things as ghosts or life after death, even though they cannot explain them either.  I have a pretty scientific mind myself, and so have a hard time allowing myself to truly believe.  But I can also see a young girl's impishness thinking it would be fun to turn on Christmas music in the middle of the night!

So, what do you all think?  I'd love to hear your own experiences in the comments below!

PS I have no idea why Blogger decided to put the photo of my towels on this blog's links!  I certainly was fine without having any image attached!