As I sit at my computer, the snow from our almost-spring blizzard known as Stella has been falling since this morning, but is only now beginning to pick up the pace.  We are supposed to get 12-18 inches, which is better than the 12-20" they predicted a day or so ago, but really, who knows how much we'll get??  Not being a fan of winter, or snow storms in particular, you can only imagine my how happy I am about this latest weather event.  I am consoling myself with the knowledge that the sun is closer and thus warmer, and the days are longer too, so the snow should melt faster than with the previous blizzard.  We have filled up some containers with our well water, and we are both at home, so driving isn't an issue.

Last week I was at home and decided to finally measure warp for the second set of advancing twill scarves/cowls.  My little loom is upstairs in a spare bedroom, and the floors are covered with an area rug and some old pine flooring.  I was wearing one of my favorite pairs of hand knot socks, knit with some "Socks that Rock" yarn that I had purchased from someone on Ravelry.  When I purchased the yarn, I was concerned about the lack of nylon in the fiber mix, but was assured that the tight twist of the merino made the yarn pretty sturdy. And, since I didn't record when I knit these, the seller may have been right, but that day, when I stepped onto the wooden flooring, one of my heels was suddenly very cold.  I looked down and saw a big hole under one of my heels.  Now, these happen to be my favorite pairs of socks, because they have a nice squish factor.  I was heartbroken, but knew that I could probably darn a patch over the hole.

Work schedules being what they are, about a week went by before I could attempt to fix the offending sock.  My first hurdle - I have no darning egg.  I have darned socks before, and was sure that I had used a wooden egg, but do not own one.  Then it dawned on me  - I had gotten one for my son, who had wanted to darn some of his own socks that I've knit him - I know, right??? - and I must have borrowed his.  So, looking around the house, I came up with this: 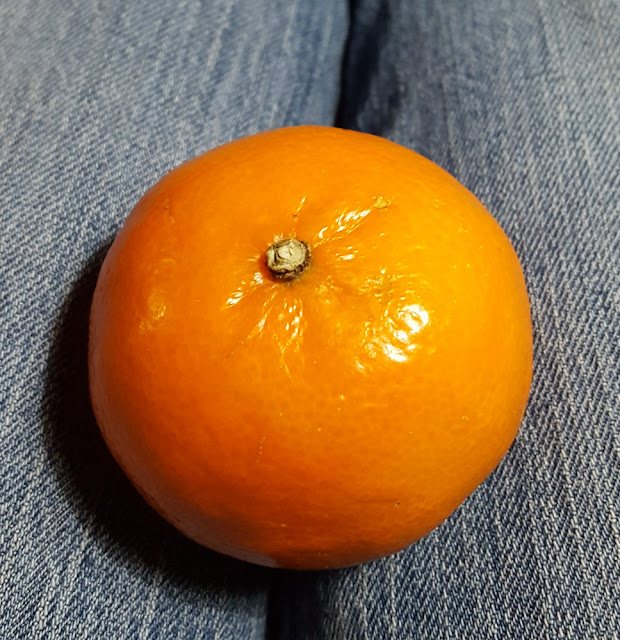 A lovely "Ruby Tango" mandarin orange.  It's quite heavy with juice, and nice and firm.  Anyway, after spending some time stitching around the hole, and starting to run the repair yarn back and forth in one direction, I just felt like that was not working for me.  I'm not sure why I felt that way, but I pulled all of the yarn out, and decided to look up knitting a patch over the hole.

The site I found showed someone covering a small hole in the toe area of her sock, and my hole was a lot larger, not to mention in an awkward spot, the heel, where a lot of shaping has taken place.  Still, I decided I would rather attempt the knitted patch; maybe because I haven't been able to knit anything for quite awhile, since I'm still working on the counted cross stitch Christmas stocking during the evening news.

So, I picked up 22 stitches near where the heel had been turned and knit one row, then purled back to the beginning.  Then the interesting part began.  The site instructed me to pick up one sock stitch at the beginning of every knit row and K2tog, then knit across until the last stitch, which should be SSK'd with a sock stitch.  All purl rows are just purled.  But because this is a heel, I couldn't just pickup stitches in the same row(s), but had to angle the picked up stitches outward to accommodate the increasing width of the heel.  What a nightmare that was.

Here you can see the hole. and the beginning of the patch.  I was using a commercial wool/nylon sock yarn that just happened to be in similar colors to the original sock yarn. 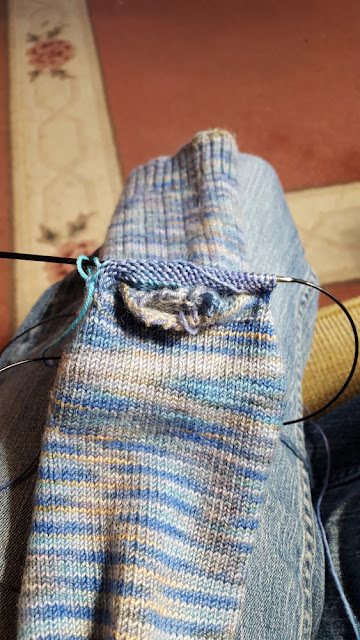 Here is the patch in progress, and you can see how I've tried to angle and enlarge the patch.  The first attempt is easily seen on the right, and there is a resultant hole there, which later got darned.  All in all, not very pretty.  I was NOT feeling very confident at this point. 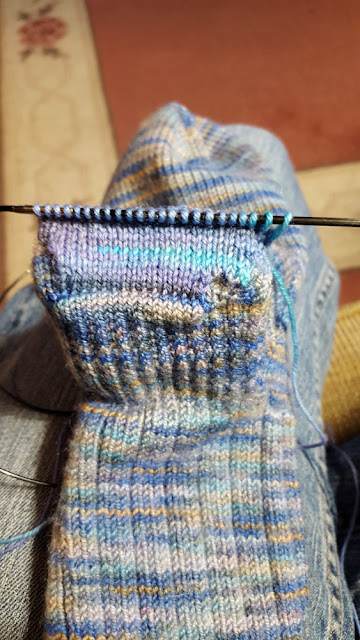 Here I have finished knitting the patch and have picked up some sock stitches to graft.  Sorry for the blurry pic. 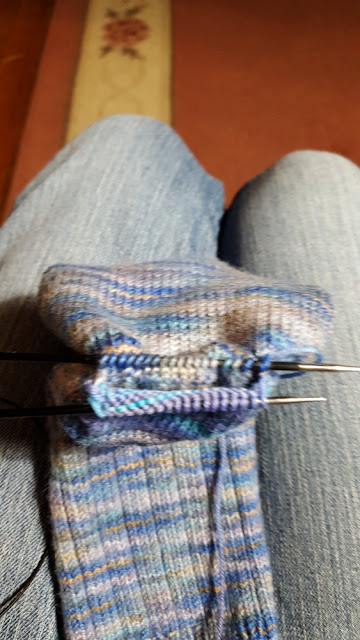 And the final result. 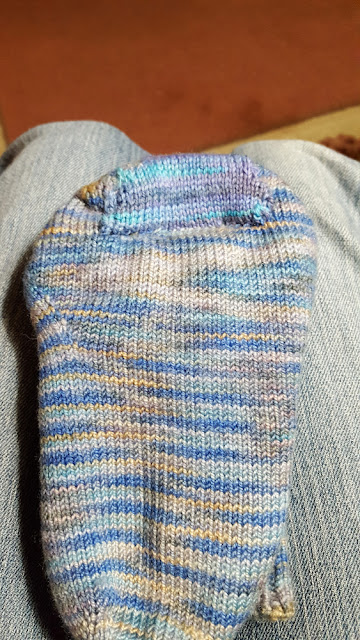 Again, not the most pretty repair ever, but I have the socks on now, and after the initial feel of the patch and woven-in ends, they feel pretty comfortable.  I have no idea how sturdy this will be.

Does anyone out there have experience with this yarn?  I have another skein to knit when I'm done with the stocking, and I'd like to reinforce the heels this time.  I have some Wooly Nylon that I can use, but I was also wondering about knitting with two strands of yarn.  These socks were knit on #1 needles, so they are very densely knit.  I don't know if I could manage doubled yarn.

Next time, there will be weaving pics!!  And probably some blizzard ones too.  Stay safe, everyone!