Or should I say, staycation!  I am in the middle of two weeks off, and at my last day of work, when people would ask, "Where are you going on your vacation?", my answer was "Not here!"  I love being able to be at home and get things done, without the pressure of only having 1-3 days in which to do them.  It's not that I'm against travelling, but with my diet restrictions, I'm always worried about finding food.  It is easier now to find gluten free vegan food, so there will be some travelling in my future, but for now, I'm happy at home!

So far, I interrupted my advancing twill towels on the Standard (its first eight shaft draft), to do a quickie project for my sister.  She called to ask if I would sew a curtain for a bathroom in her cottage. The window is in the bathroom, so I figured there had to be a need, so I jumped right on it when the cloth came.  No photos, but she got the cloth at Jo-Anne's, and it's a bright, almost lime green flowered print - not my taste, but hey, not my window, either!

After that, I started a short warp for a few bumberet towels for a new nurse to give to her mom for her birthday. Angie had seen my purple ones and liked them, then asked if I would weave two for the birthday in early May.  I told her they would be late for sure, since she asked me a week prior, but she was OK with that.  She showed me some pictures of her mom's curtains and plates, then picked out the colors of Maurice Brassard 8/2 cotton from my sample card.  I had every color but one, so ordered that from the Yarn Barn, which came right away.

The color combo was, again, not my idea, but she asked for towels with an almost mint green and natural, and bright teal, red, silver, and pale yellow.  I warped for three towels, just because warping for two seemed so wasteful.  I wove two towels with the green as weft, and one with pale gray (silver). Personally, I really liked the silver one.  To me, the green made all the other colors look a bit off.

Here is a photo of them completed, but it's hard to tell them apart (over exposed).  The middle one has the pale gray weft. 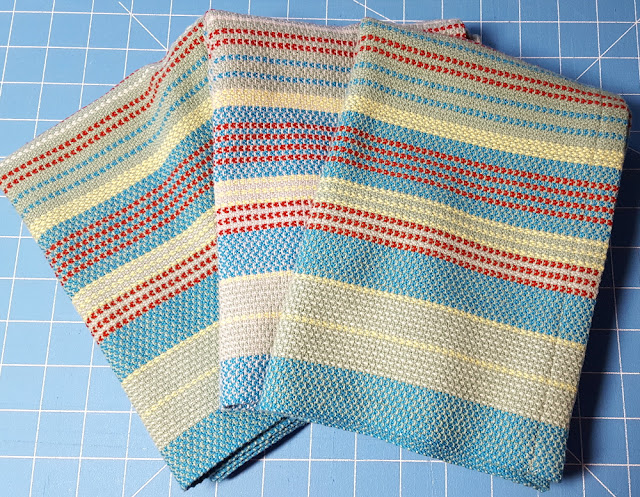 Angie loved the photo I texted her, but will happily wait until I returned from vacation to receive whichever two she chooses.

I then decided to tackle a job that I've wanted to start for some time, the painting of the living room. Right now, it holds my Standard, plus a rocking chair and a recliner, but it is really used mostly for weaving.  The stairs leading to the second story are there, though, so we walk through it several times a day.  My house is quite old, having been built in 1870, and this room has a very high ceiling and is quite chilly in the winter.  It also has a very large picture window with side lights, all of which leak air and don't open.  I contacted a local contractor about replacing that and doing some outside sheathing work this summer, but in the meantime, the very old white paint desperately needed an update. Here's a photo of the stairway before; 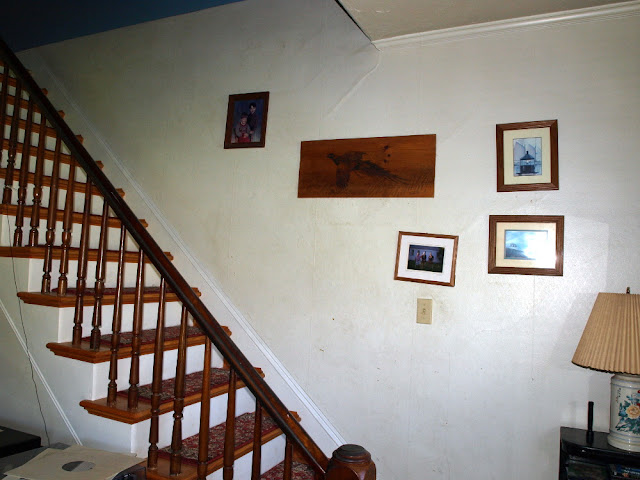 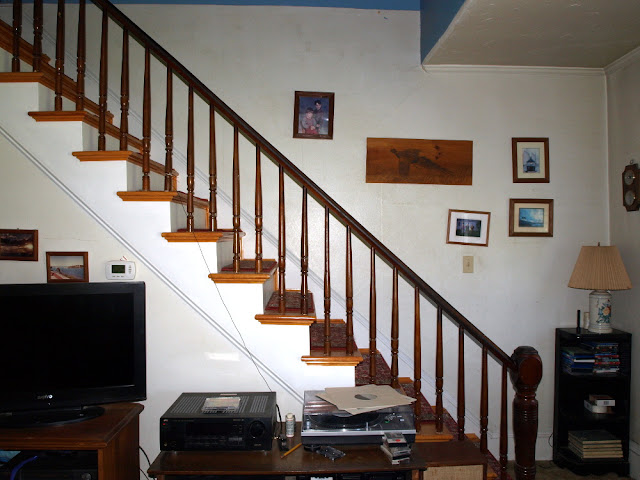 The owners before us painted over wallpaper - you can just see the pattern in the first photo above - but in the interest of actually getting the job done, we decided to just paint on top of that.  I've had my eye on a lovely shade of green called Sanctuary from Behr, so despite my hubby's unease, I bought the paint last week and everything else I'd need to get the stairwell done.  First, however, I had to wash the walls, and oh my, how filthy!

The next day, I taped off the trim and started to paint.  The plan was to just paint the two walls you're seeing on either side of the stairs, since with work being done this summer, there's little sense to do too much beforehand.  After painted both coats yesterday, I came downstairs this morning and was a little unhappy with the results.  The green looked two yellowy, kind of like pea soup.  But then I realized it was being contrasted again the bright kelly green of the frog tape.  Once I removed that, I really liked how the green looks against the white trim and the new stair treads.  What do you think? 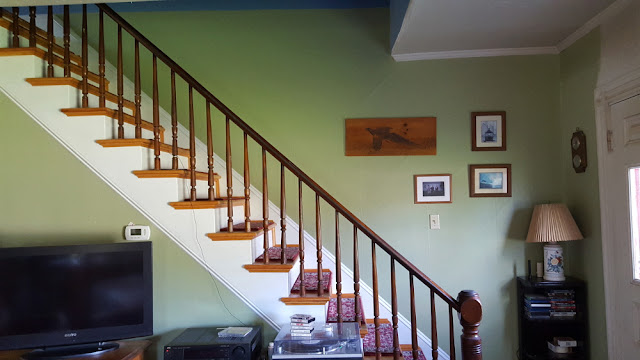 There will be some kind of trim between the blue paint from the upstairs and the green; maybe a chair rail, or something similar, painted white.

As I finally got back to my project on the Standard this morning, it was lovely to glance up and see my new, colorful wall right in front of me.  Hubby likes it too.  I can't wait to paint the rest of the room!

Here's an in-progress shot of the towels I'm working on now; 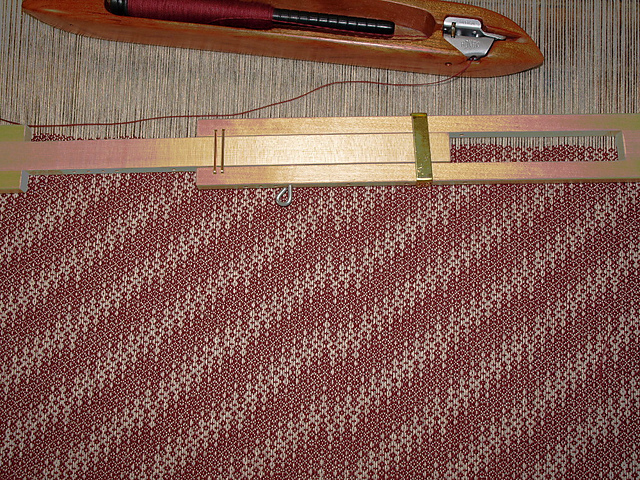 Oh, there are some design elements in there, but I still like them.  Plus I'm learning that instead of doing "walking" type treadling with my feet crossing over each other, with this larger loom having my left foot being responsible for the four left-most treadles and the right for the others works better, but it is an adjustment.

I've also just designed my next baby wrap, based on a photo from a member of the chatter group on facebook. Still working on nailing down the treadling and ordering yarn.  Photo next time!

Tomorrow, I plan to dye a tencel scarf warp.  First time dyeing a warp, as well as a non-animal fiber. Should be interesting.

Azalea is almost in bloom, two burning bushes have been purchased and planted, and my flower garden is starting to see its first perennials come up!

All told, it's been a busy week, but so much fun!