As you know, I've been on a much-needed staycation for almost two weeks now, and, for the most part, I have put that time to good use.  The first week was spent cleaning and painting the stairwell and continuing to weave on the advancing twill towels.  Those towels took a good, long time to complete, but complete they are! 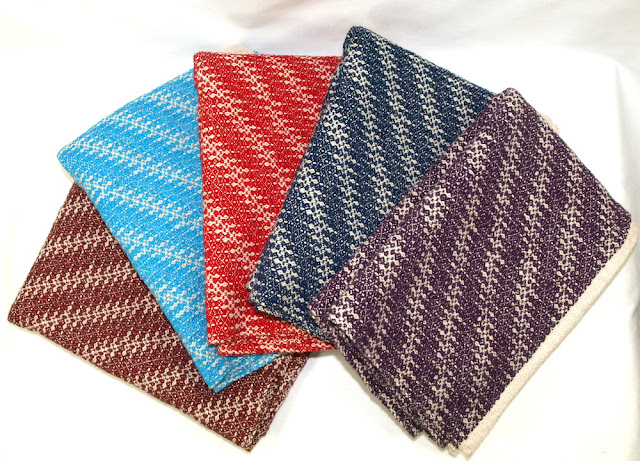 I ended up with 6 towels (2 of the same color), 5 of which measure 17.5" X 28."  The deep purple towel is smaller, only 24", but it's still big enough for someone to make use of it.  I have to say, I LOVE the organic linen/cotton from Maurice Brassard! The towels came out very textured but soft, almost nubly.  I think they'll absorb really well! 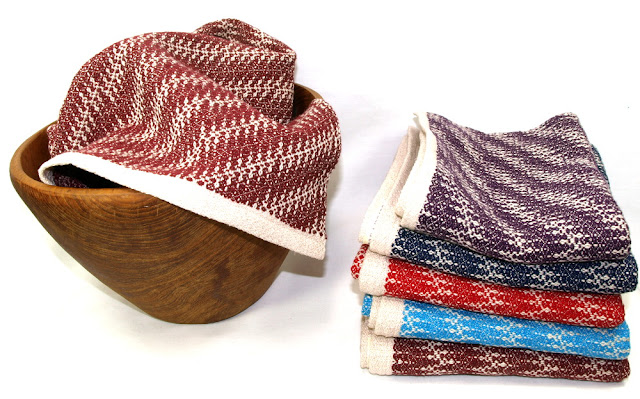 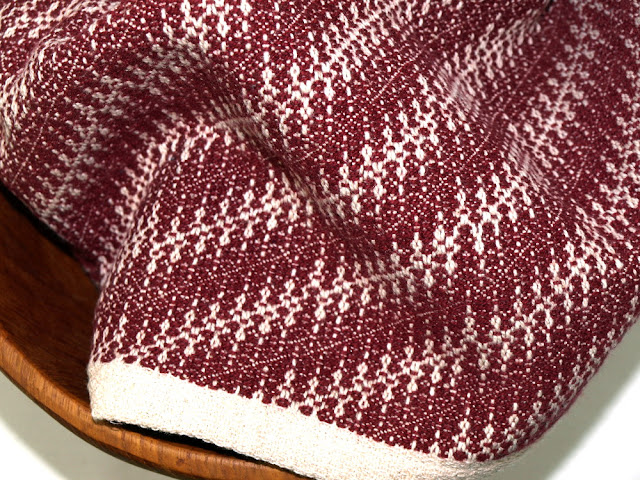 I also did my first experiment with dyeing non-animal fibers.  I had wound a scarf warp from some undyed tencel for this project, but had set it aside until I could do the dyeing outside, knowing it would be quite messy.  Last weekend proved to be a good time, so I set up my plastic on the porch and prepped my dyes.  I decided to go simple and just use 3 colors; green, blue, and purple.  I wanted them to be quite saturated, so I added 1.5 teaspoons of each dye powder to 8 ounces of urea water.  I was working with a hybrid of directions, as well - the tutorial from Dharma Trading Co, and the directions that came with the kit I purchased from someone.  This kit was originally from Halcyon Yarn, and much to my dismay, the two sets of information did not agree.  I was assuming that there would be soda ash in the kit, but there were two baggies of different dye fixers, one of which was supposed to be used in a 24 hour soak.  I wasn't prepared to do that, so I guessed at which one was soda ash-like and proceeded to prep via the Dharma tutorial.  Nothing like winging it!!

After the dyes were ready and my warp had soaked for an hour or so, I wrung the warp out and laid the two sections on the plastic on the porch.  I planned to line up the dyes, more or less, so that when I wrapped everything up, I wouldn't have to worry quite so much about colors running into each other and getting muddy. 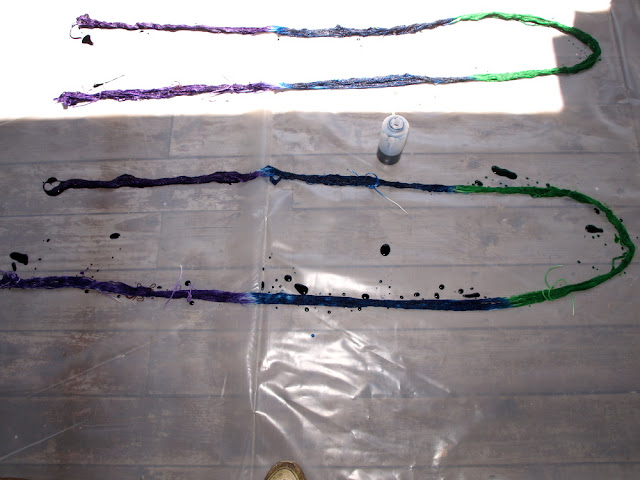 Sorry for the over-exposure, but you can see that the ends were purple, the middle blue, and at the apex a bright green.  I then carefully rolled everything up, remembering to first fold the ends in to contain the excess dye. 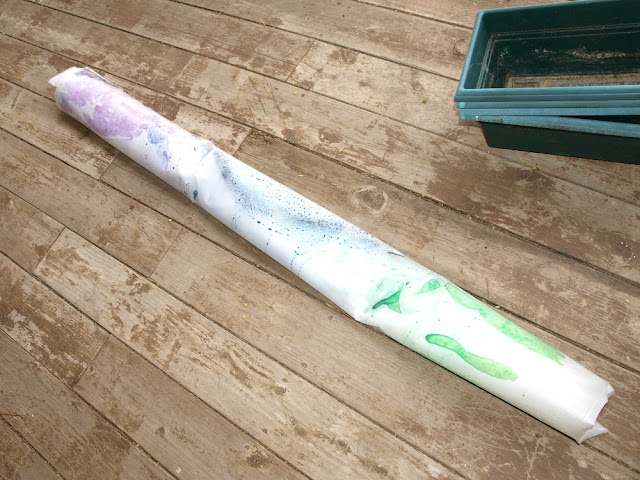 I left this outside for the rest of the day, but the night was supposed to be cool, and since the tutorial stated the dyes should set in at least 70 degrees, I folded this up and put it in a bucket to take upstairs, aways from curious cats.  Unfortunately, I didn't apply my good sense about containing the dye to the long ends of the plastic, so when I picked up the roll, this was the result.

Not a huge deal, since the deck of the porch needs refinishing, but you'd think that I would have applied logic to all parts of the situation!

After ~30 hours, I took the roll back outside and started to rinse it.  Boy, what a mess!  Once the excess dye seemed to be less, I brought the warp inside and added some Synthropol, which itself needed many, many rinses to remove.  I noticed that there continued to be some excess dye, so I just kept running the yarn under running water until it seemed clear.  After wringing the yarn out, I hung it in the bathtub to dry.  The next morning, I found some faint stains which easily cleaned up, but also some very stiff yarn.  I was afraid to try to put it on the loom; it seemed almost crispy, so while I was ironing the towels, I spritzed the yarn and then ironed it a bit, improving its texture by a bit.

Today, I loaded the yarn on my little loom.  I may have been a bit too enthusiastic about the green dye concentration, but other than that, I really like the colors, especially the transitional areas. 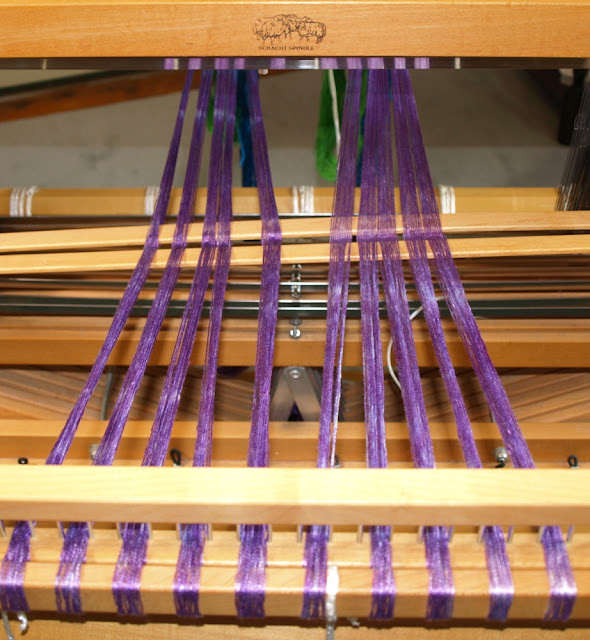 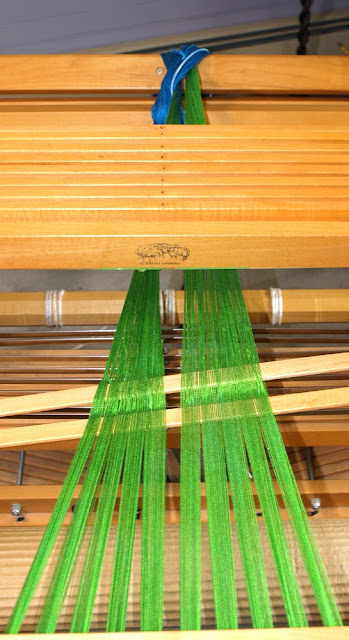 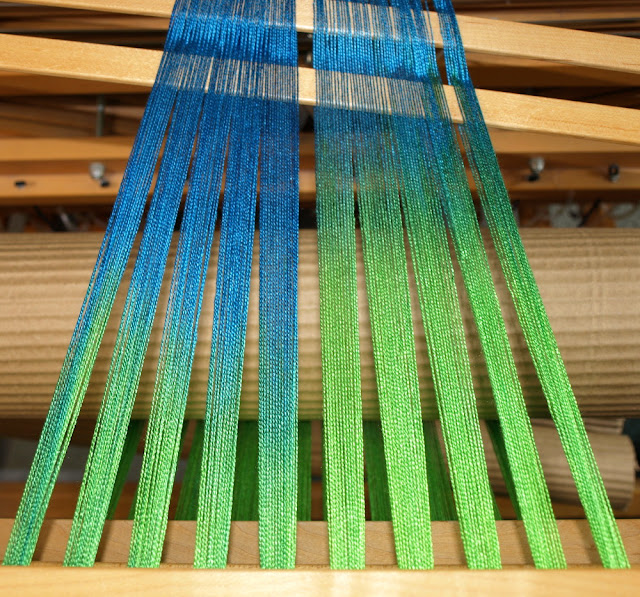 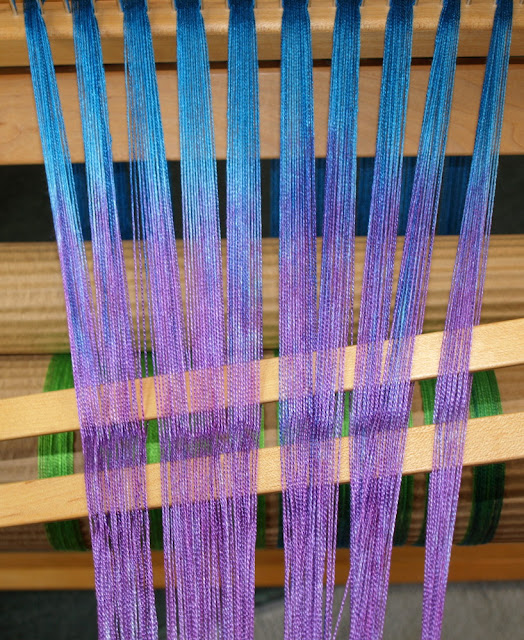 Hopefully, threading will commence this afternoon.  My son is coming home for the weekend, and very little gets done when that happens.

I also alluded to the next baby wrap design in my last post.  While I really like the design, you would not believe how complicated it was to get the threading right.  I think it has to do with doing the design work on my desktop, which is a Linux OS, and then trying to work with Fiberworks through an application that allows Windows programs to work in Linux. In the end, after many failed attempts, I ended up loaded the image into Gimp, then writing the thread by thread order on a piece of paper. Yeah, I'm that devoted.  Or crazy.

The image was offered up by a member of my chatter group on Facebook, and it is of Spokane.  I just fell in love with the colors!  The yarn has been purchased, and as soon as the hand dyed tencel scarf is done, this will go on the loom!

In addition to all of the fiber-y activity, my hubby caught a bad cold on Monday, so there was a lot of nursing care going on - c'mon, you know how men are!  And mine is so generous, he gave it to me on Wednesday!!  So that has slowed me down a bit these last couple of days.  Nothing like ending your vacation with a bang, er, sniffle.

Lastly, I want to share our annual gardening success story.  We are not very good about our gardening attempts, but many years ago, we planted a small azalea in front of our unused dug well, and it has flourished despite our best efforts!  Usually near Memorial Day the flowers are at their peak, and it makes for some stunning color. Yesterday, the weather was at its finest for the weekend, so I took a couple of photos to share, even though it's not completely open yet. 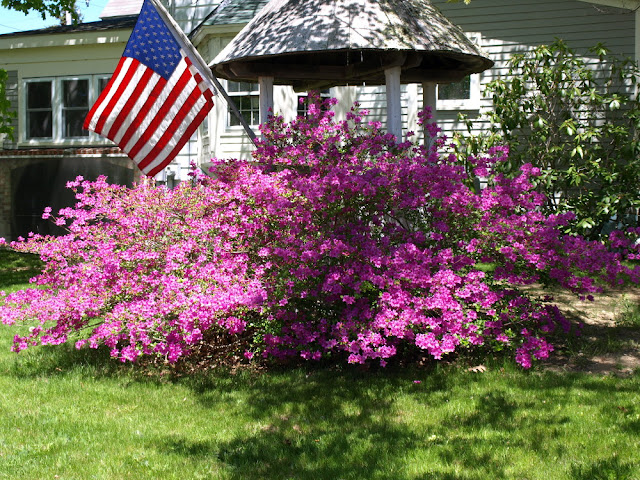 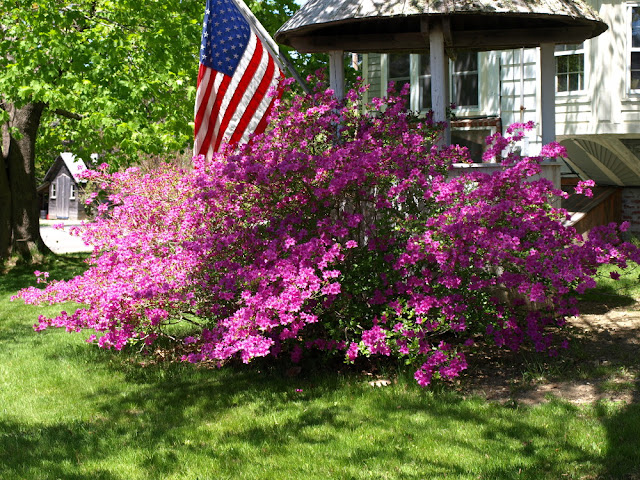 I wish everyone a wonderful Memorial Day, however you celebrate it.  Remember the ones who have served our country, past and present.  Our community band is playing at a ceremony with the Traveling Vietnam Wall, which arrived yesterday at the Henry Knox Museum in Thomaston. It will be here through Monday, and there are many ceremonies being held.  I'm sure it will be very moving to see it and all the names.