Oh, My Aching Back!!

Here are the shafts, all loaded up with new texsolv heddles;

Little by little, I crawled under the loom to finish the conversion.  This was done during my "busy" week at work, when I only have a couple of days in which to do chores and "play."  I also wanted to take time to do this right.  When I first got the loom, I was totally overwhelmed by how different the process of tying up was from my jack loom.  I feel like I was adjusting things with little knowledge as to why lamms, shafts and treadles should be a certain way.  Along the way, I've jiggered with the tie ups a bit, but each time felt like I just needed to get it done so I could get to weaving.  Because I was starting from scratch this time, I wanted to ensure that everything was where it should be.

Once the correct jacks were installed, I brought the countermarche back to the loom and place the shafts in the shaft holders.  Then I moved the countermarche to the back of the loom and placed the bench inside the space so I could sit there to thread.  Well, what a difference a few shafts can make! There was so much less room in which to thread!  I had to contort myself to be able to see the 7th and 8th shafts well enough to thread the warp. Needless to say, that part of the process has fallen further down my list of "things I enjoy about my loom."  Does anyone out there have any pearls of wisdom about a better process?

Ready to be threaded; 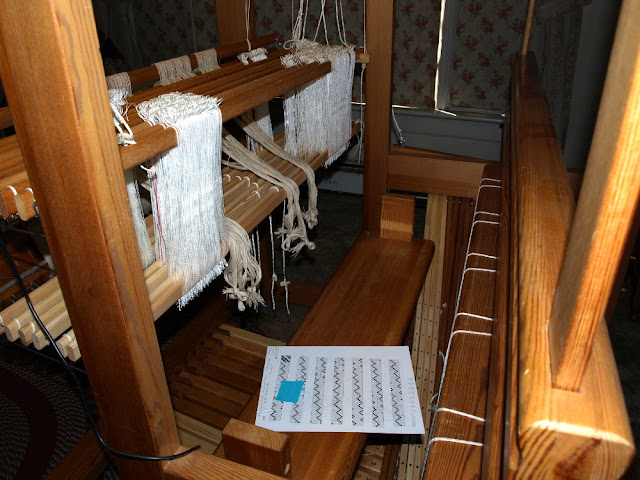 When I am threading a new-to-me pattern, a little trick I use is post-it notes.  The little mini ones are perfect for framing however many threads my memory thinks it can handle in one go.  Then the notes just get re-stuck at the next interval of threads.  Easy peasy, and a great help to this aging brain. 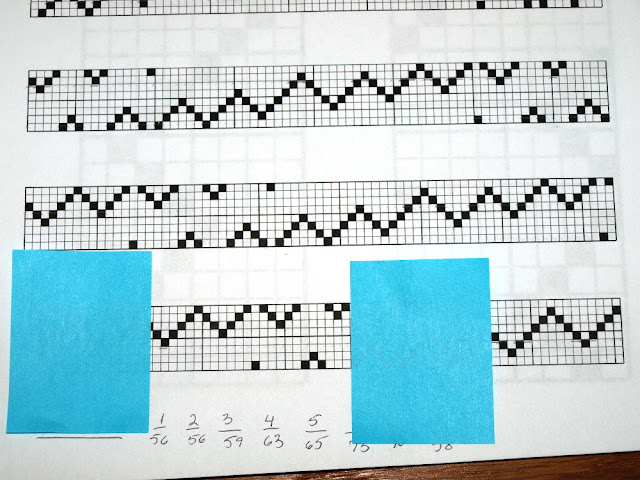 Once threaded and sleyed,  the countermarche assembly was moved to the front of the loom so that I could lash onto the front beam.  Then it was time to tie up the lamms.  At this point, I would usually leave the shafts in the shaft holders as I tie up the lamms, but in the past I think that has led to some issues with the shed.  This time, I removed the holders, so the subsequent tie ups of the lamms would be based on where the shafts would actually be during weaving.

Here's a photo of the lamms, all nice and even; 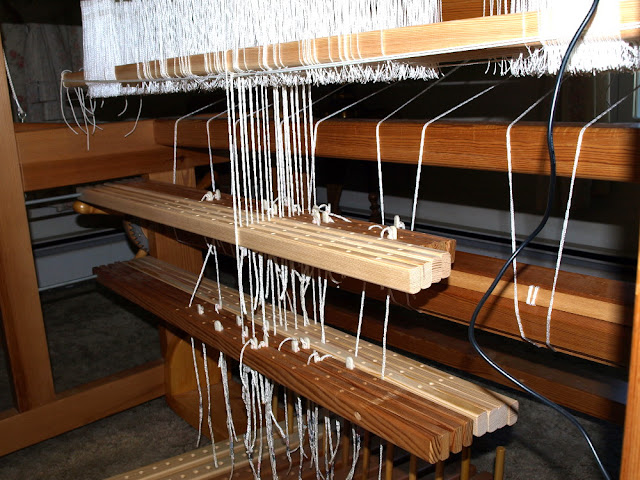 Once the lamms were done, I had to put this project on hold to start a quicker but secret project that I can't disclose here.  Safe to say it will be revealed soon, and is almost completed after only a few hours of work.  Right now I'm just waiting for it to dry before the finishing touches are added.

While I was waiting, I went back to the big loom and tied up the treadles.  Again, a much more onerous activity with the smaller amount of space under the loom, hence the aching back reference.  I did this last night after dinner, and that was a mistake, because it really affected my sleep.  Note to self...don't do that again!

This morning, I removed the jack pins, always a nail-biting moment for me, as I wait to see if the shafts stay even.  They did (yay!), but upon testing the shed I found a bunch on sleying errors - grrrr! I think I got it all sorted by lunch time, so hopefully this afternoon I can at least sample a bit.