Apologies in advance to the non-weavers out there.  This is a loom "tech" heavy post - no yummy new weaves to look at!

After my last post, I decided that I did indeed want to upgrade my Standard to eight shafts as my next "project." Once I gave myself a moment to think about it, I realized that it shouldn't take too much time to do, once the missing metal parts were obtained at the local hardware store.

On Monday, I took the morning to organize the rest of the texsolv that came with my loom when I purchased it. They were all in a ziplock bag, and looked like this - some were grouped together, some were not. 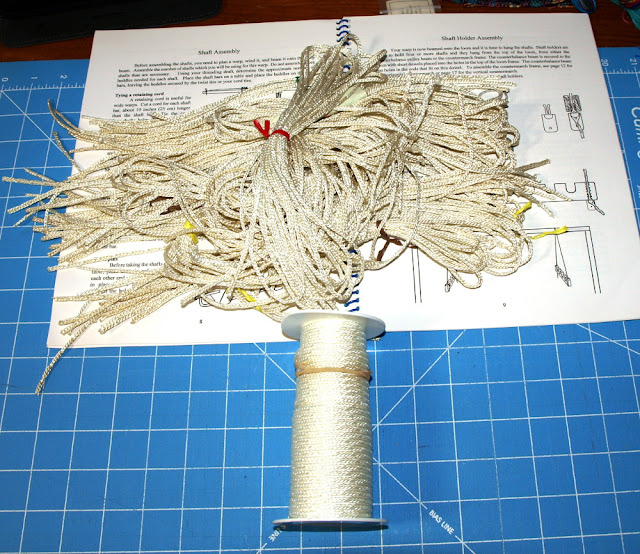 As you can see, I also had my partial tube of texsolv that I purchased when I decided to redo the treadle tie-ups. I was afraid I wouldn't have enough, but after measuring and grouping the texsolv together by size, it looked like this; 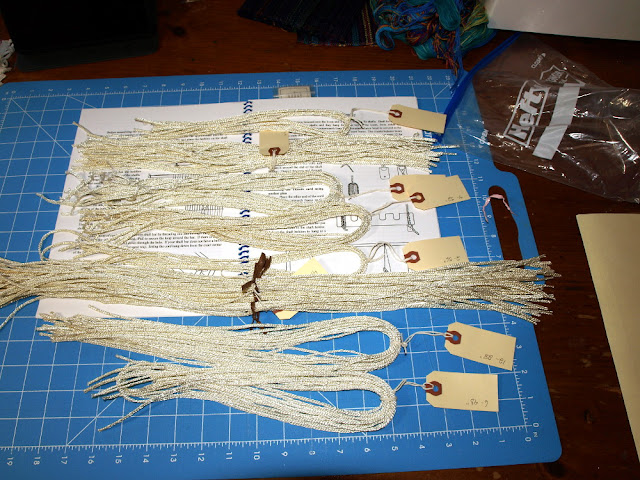 I should have more than enough for the upgrade, including the necessary treadle tie-ups for treadles 5-8!

My first step this morning after breakfast was to put the new treadles on the back rod - the easiest part of the project, I'm sure!  I then put the new short lamms on the rod - also very easy.  The new long lamms are too long and need to be cut back to 40 inches, so they are not installed yet.

After that was all done, I took four of the new shaft bars and, one by one, laid them on top of the old bottom shaft bars, making sure to not miss any heddles. 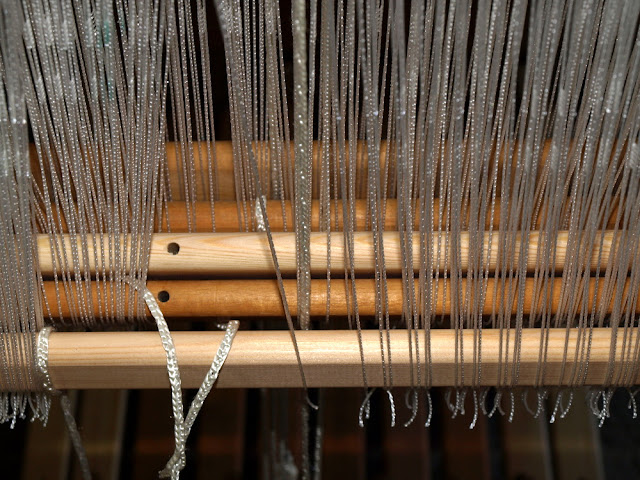 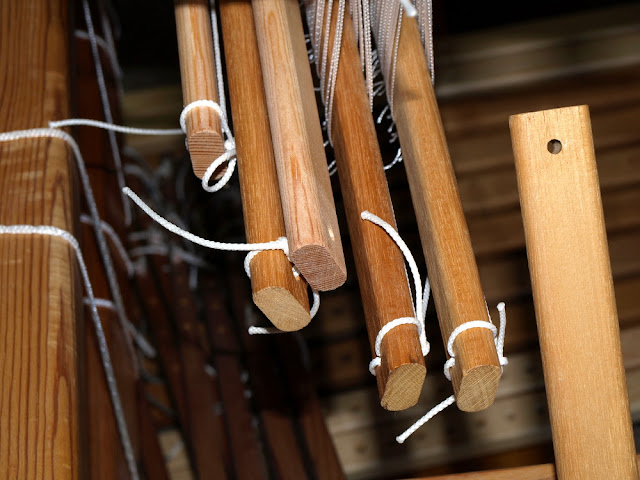 Once I was sure that everything was in place, I undid the restraining line on the old bar and retied it to the new one.  I carefully pulled out the old bar, repeated this for the other 3 shafts already on the loom, and, Voila! 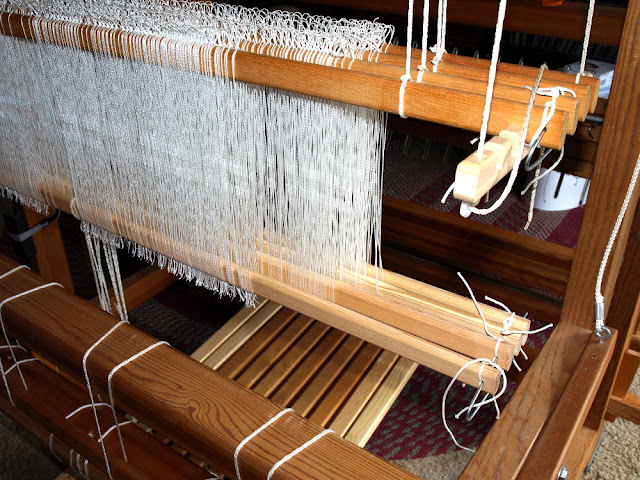 Four shafts with old bars on top and new bars on the bottom, just like I was instructed to do!  You can see the newer treadles on the outsides underneath.

I then brought the remaining old bars and new bars (4/4) to the dining room table to put on the new heddles and restraining ties.

Luckily, my kitties were napping during this adventure!  One loves to chew on plastic, and the other is fascinated by string of any kind. Lots of opportunities for them to get into mischief here!

Once these new shafts were done, I took them to the loom to place in the new shaft holders.  I had temporarily hung the holders from the side frame of the loom so I could take the countermarche off.  Here's the original countermarche on the table; 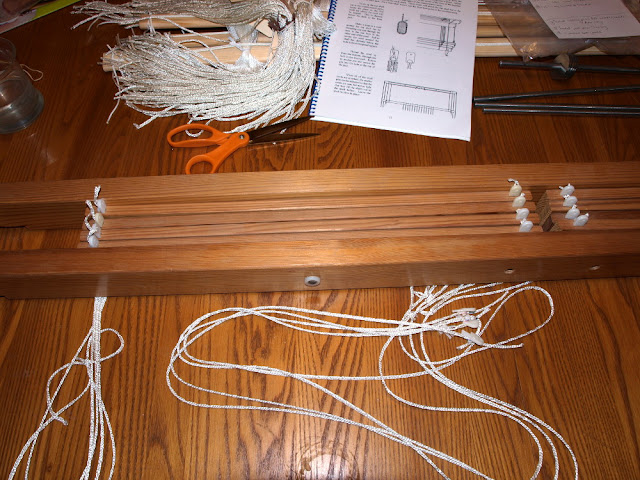 I was really on a roll at this point, and thought that the whole thing could get put back together by lunch! Removing the pivot rods from the countermarche proved to be a bit of a challenge, but after trying several different tools, I removed them and got ready to install the four new jacks.  But then I saw this; 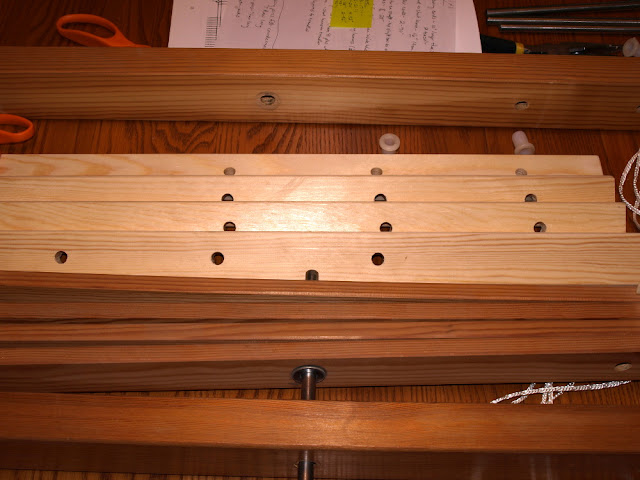 Notice anything?  None of the holes line up with the pivot holes on the old jacks.  Instead, the new jacks have three holes, and don't line up no matter how the pieces are positioned.  I'm at a loss about this.  Perhaps the nice Glimakra folks accidentally sent me the wrong things.  I did double check my invoice, and the listing seems correct.  I've emailed a photo to Sarah, who was so helpful when I ordered, so I'm hoping to hear back from her soon, but in the meantime, I'm stuck with a half-taken apart loom, and strings all over my table for the cats to play with.  My hubby offered to cut new holes, but I'm just not sure if the wood will still be as strong and hold up well.

I've since worked up my first project on the loom for when it is complete - an eight shaft towel warp, which I can start measuring today onto the sectional beam.  But should I?