Well, the draw for the wrap was a flop.  No takers, so it's gone into the bin until someone decides they want it.  I don't have any others in stock at the moment, so eventually it will go, I hope.  I've yet to list it in my Etsy shop, but plan to soon.

The cowls had a much warmer reception, with two of the three being sold.  All that is left is the lighter-colored one, woven with natural-colored weft.  That is listed on my chatter page on Facebook - https://www.facebook.com/groups/1657157491162412/ - along with a couple of inkle bands.

This morning I wet-finished the second wrap, woven with black 8/2 tencel as weft.  I love how the colors pop!  I hope to take photos later today, so look for them in the next post.  The final length is 4.35 meters, so it is longer than the other wrap.  Not sure whether I'll list it in a draw, or just straight up for sale.  I have to work over the next two days, so it probably won't be listed until Sunday or Monday.  I still have to sew the ring sling as well.

On the big Standard, I've put on a quick towel project to try out a new-to-me structure, Bumberet.  On Ravelry in the Warped Weavers group (http://www.ravelry.com/groups/warped-weavers) there was a thread recently filled with colorful towels woven using this structure, and I was captivated by them. Turns out that this is a very old draft, and it has several treadlings.  Some folks found it on Handweaving.net, but most used a draft from Handwoven magazine, March/April 2015, which is what I decided to use.  I also wanted this to be a stash-busting project, so I used 7 colors of Maurice Brassard 8/2 unmercerized cotton. 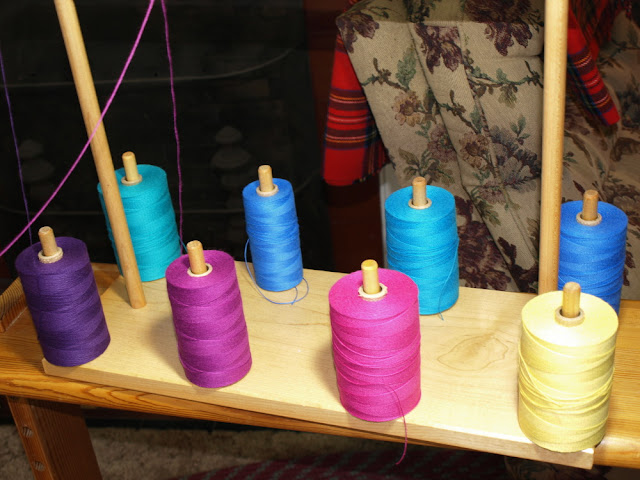 This photo is a bit over-exposed, but you get the idea.  443 ends, wound in groups of three, 6.5 yards long.  I used the Warping Square, and this time it performed perfectly.  I'm not sure whether it's because I did something differently, or because it was such a short warp, but what a pleasure to use! Yesterday and today I finished threading and sleying, and hopefully I will be able to lash on later today.  More pics to come!

I did (finally!) realize that I had the answer to the question of "How do I wind a warp with many color changes without hurting my back bending over to retrieve the yarns?"  My Glimakra bench! My cone stand fits perfectly on it, and as a bonus, it seemed to stop all the tangling that would occasionally happen has yarns came up and over the top of the stand. 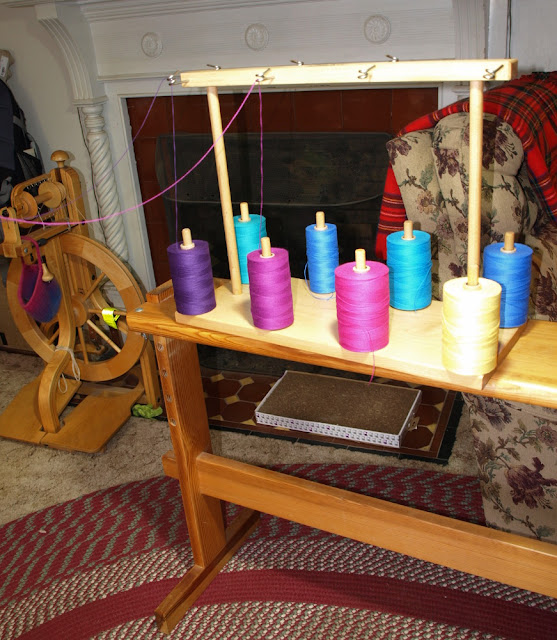 A perfect solution staring me in the face all this time!

I'm still knitting on my socks that I'm making using some yarn I bought from another knitter on Ravelry.  The socks are working up quickly, and I'm almost done with the cuff of the second sock (I knit toe up). 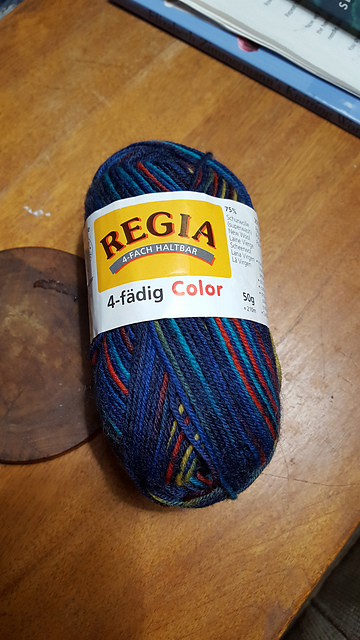 I'm looking forward to starting a few more pairs soon, with some of the yarn I got for Christmas, plus a skein I bought recently in Portland that has a touch of cashmere in it.  Excited!