Another year has come and gone, and yet again I am astounded by how quickly the time goes by.  I know there is a mathematical reason for this, or so they say:  if you are 5 years old, one year is a fifth of your life, so a very large chunk.  If you are 50, it is one fiftieth, and so a mere snippet.  I don't know if that is truly the one and only reason; it may have something to do with perception, experience, etc, but it is almost scary how quickly the days/weeks/months go by.

I now have the Twilight warp off the loom!  On the 16/5 yard warp I managed to weave 2 wraps, one ring sling, 3 cowl pieces, and a bit of scrap.  The best news is, after all of the repairs I had to do in the beginning, I had very few problems right until the end.  On two of the sections large clumps of very loose ends showed after the first wrap.  They looked as if they built up against the rakes and so were not tensioned well.  I was in dread, waiting for those ends to come off the beam and wreak havoc, but they never did.  Somehow, and I have no idea how, those ends remained loosely wrapped around the beam, even as the knots came off.  I had to cut where they came out of the knots, but it is like they were beamed ahead of the rest of the sections.  I should have taken a photo, but I think it will remain a unexplained phenomenon.  I'd be very happy if it did not repeat itself!

Here is the cloth off the loom, ready to be zigzagged. 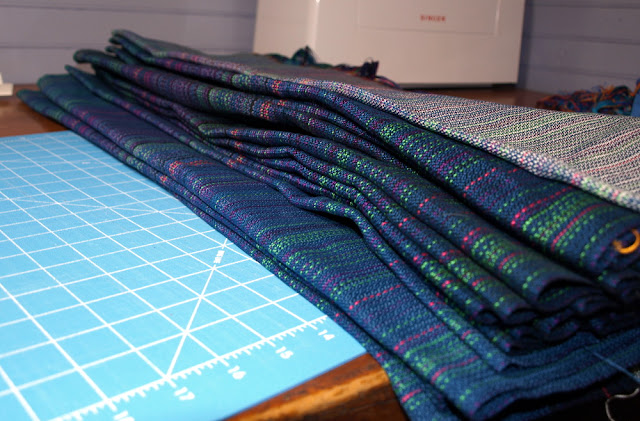 At the very top you can see the cowl piece I wove with a natural 10/2 cotton weft.  I never would have thought of it, but several people said they would have liked to have it used as weft for the wraps, so I figured it couldn't hurt. I think I kind of like it - it's a very different look.  The other cowls I wove with blue cotton and black tencel.

The next post should have completed photos, then on to the next project.  I'm thinking some towels, perhaps some short warps to try some different structures.  I'd like to try crackle, both with and without tabby (I will definitely leave enough for sampling), bumberet (which was a very popular thread on Ravelry recently - the towels were stunning!), and perhaps some Echo and Iris.  Yes, I received that wonderous book for Christmas from my sons (after explicit instructions), and I think my brain imploded after reading one third of the book or so, but perhaps I can try a simpl-ish version. These will have to be on my Baby Wolf, since the effect is much more impressive with 8 shafts than with 4.  I'm working towards buying parts to make my big loom an 8, but for now it remains my 4 shaft workhorse.

Here is some of the fiber-related things I received this year. 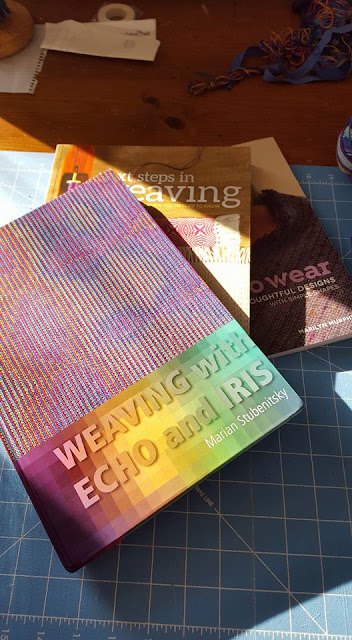 and some sock yarn and wool/silk fiber to spin for socks.  Yeah, I have an addiction of sorts... 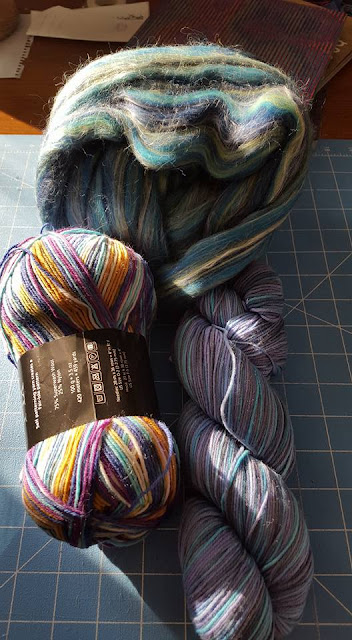 I wish each and every one of you a healthy, happy, a prosperous new year!