This is my first rep rug, and only my second rep project, the first being some placemats (meant as a gift, so no photos yet!).  I made many errors along the way, some of which I mentioned in another blog, but the final one was a common one amongst weavers, I think.  I saw that the end of the warp was getting closer, but thought I just might be able to eke out one last pattern repeat before weaving the ending sequence and then the hem. 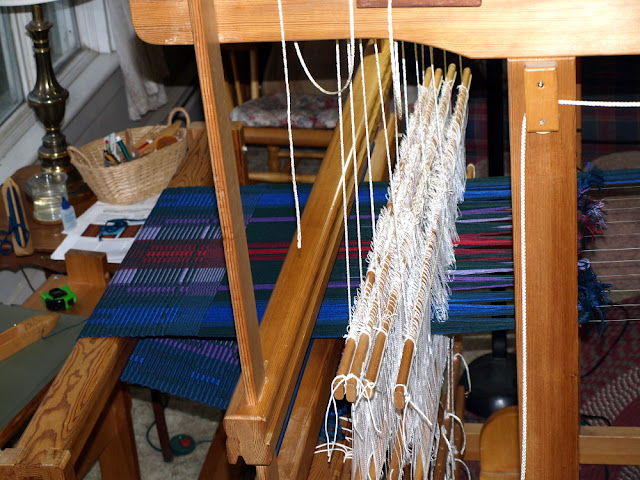 Once cut off the loom, I folded the hems in thirds and hand stitched them down, scratching my right thumb and jamming the tapestry needle under my right thumbnail in the process.  Ouch!!

Here's the rug on my cutting board after hemming; 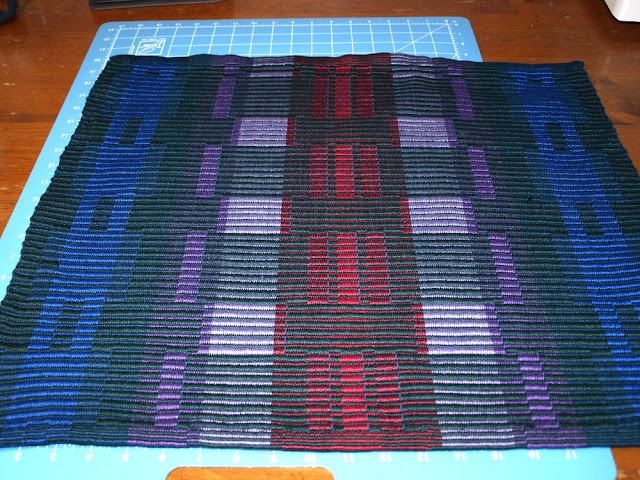 And on my very old and very dirty kitchen floor.  We have a sink in the corner, so it actually worked out well that the rug was smaller than planned. 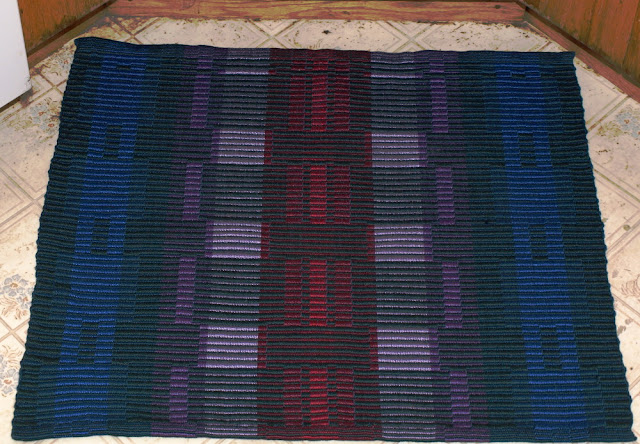 I didn't wash it first, as I do all other handwovens, because this fabric is very dense and doesn't need a wet finishing to coalesce into fabric.  I also didn't put down a rug pad, but the rug is quite slippery on the floor, so I put some carpet tape under the corners.  I'm not sure what will happen when I do have to wash it, whether I can get the tape off prior to laundering or not.

Despite the errors and issues, I really love the clearly delineated geometric designs in rep weave.  I will definitely be weaving another rug in the future, putting to use all the lessons I've learned along the way.

I now have two naked looms, which is a rare occurence for me.  I've designed my next baby wrap warp, but, am having difficulty getting my design to open as a .wif file.  I use Random Weave Stripes (http://kajwiklund.github.io/random-weave-stripes/app), and have successfully gotten wif files from it before, but am having difficulties modifying and downloading the correct format.  I may have to figure out a way to recreate the thread by thread color order some other way.  Ugh.