You know the day holds promise when, after awakening early to go to another 12 hour shift (your third in four days), you get the call that you can be on stand by.  It couldn't have come at a better time, because my son has been home all weekend to visit, but I've mostly been at work, so it's nice to be able to spend some time with him.  There's still a chance that they will need me at the hospital, but so far I've done some weaving that would have otherwise had to wait, while he slept in.

Another plus - this last storm was predicted to give us another 20-24 inches of snow, but we were somehow mercifully spared the brunt of it and only received 6-8 inches.  Since my last post we have had 2-4 storms a week, with the majority being over a foot deep.  I think it is really wearing on people - we all seem to be walking around with stunned looks on our faces.  "How can this be???Again?!?!?" Our front "lawn" has so much snow ("how much is it?" Remember that?) that we cannot see the street or the driveway from the house.  At all.  It's just a wall of white.  So the fact that we only got 6-8" has really raised spirits around here!

While working on my rep weave placemats, I have found starting and stopping the thick weft to be an enormous pain in the...keister.  I'm using 3/2 mercerized cotton, but because it comes plied, trying to separate the two plies so I can only have a single width's overlap is very fiddly.  Often times, the single plies fall apart after separation, leading to a few "hot flashes" as well as choice verbage.  After three placemats were completed, I did some figuring and tried to wind just enough thick weft so I only had to fiddle with it at the beginning and the end.  I had very little trust in my math, and as I was weaving it looked like I would run out.  But lo and behold, look how much was left at the end!  Another plus!

I haven't taken too many photos of this project, but here is the most recent; 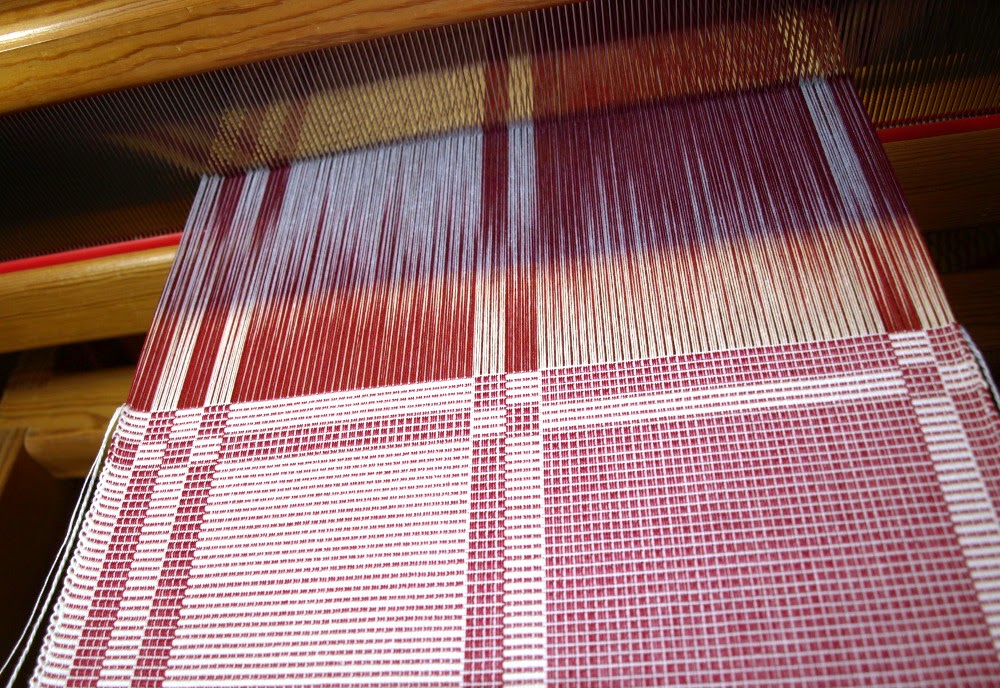 I also finished a knitting project I started a long time ago; my hand spun, hand knit sweater.  The yarn was spun during the summer of 2013, in various shades of purple with hints of other colors.  I tried to spin it a bit thicker than I ended up actually doing, so I had 1721 yards from 16.4 ounces.  The sweater was a pattern that I bought on Ravelry, called the "Henni." It is a top down cardigan, with stockinette stitch everywhere except for the cuffs and borders.  This is some of the fiber; 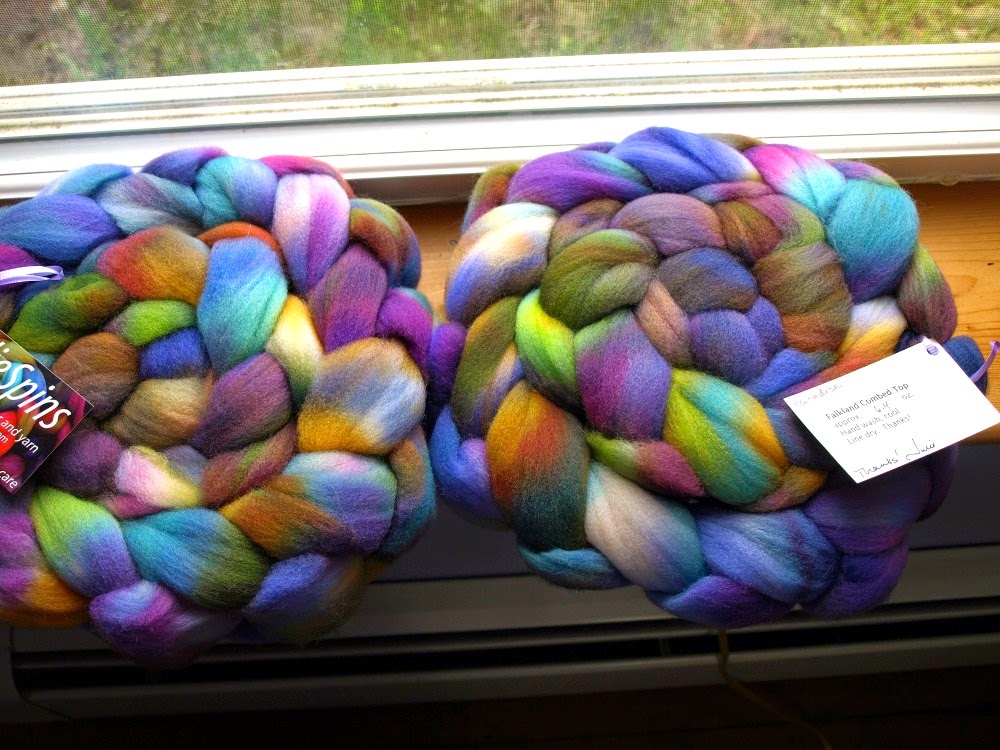 and the spun yarn; 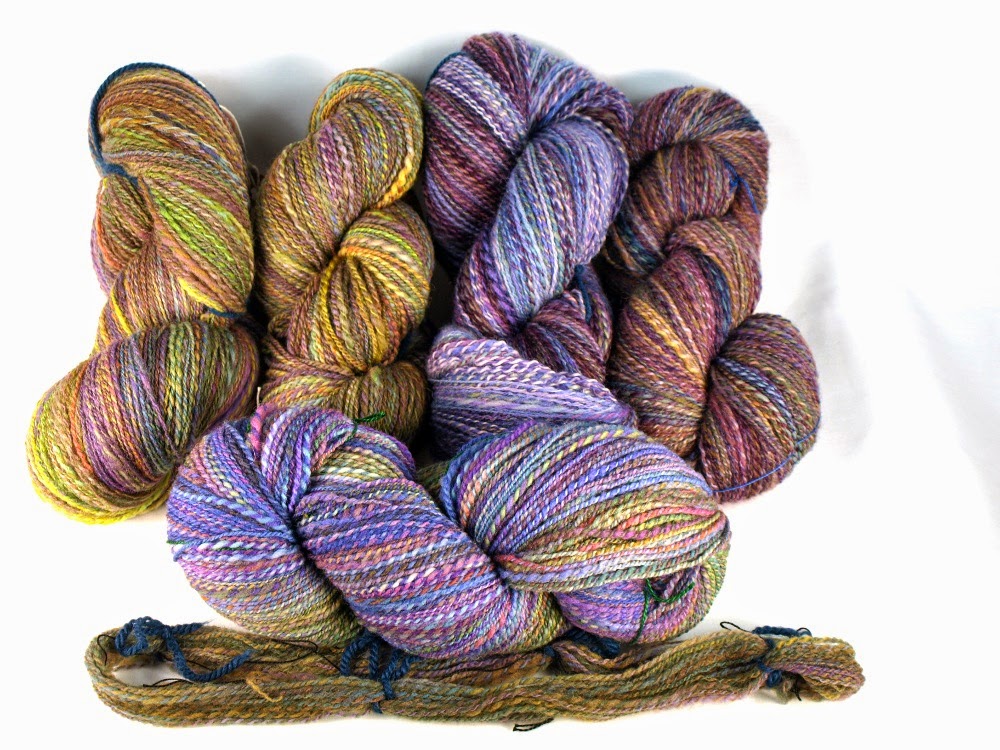 and the finished sweater, drying while being blocked. 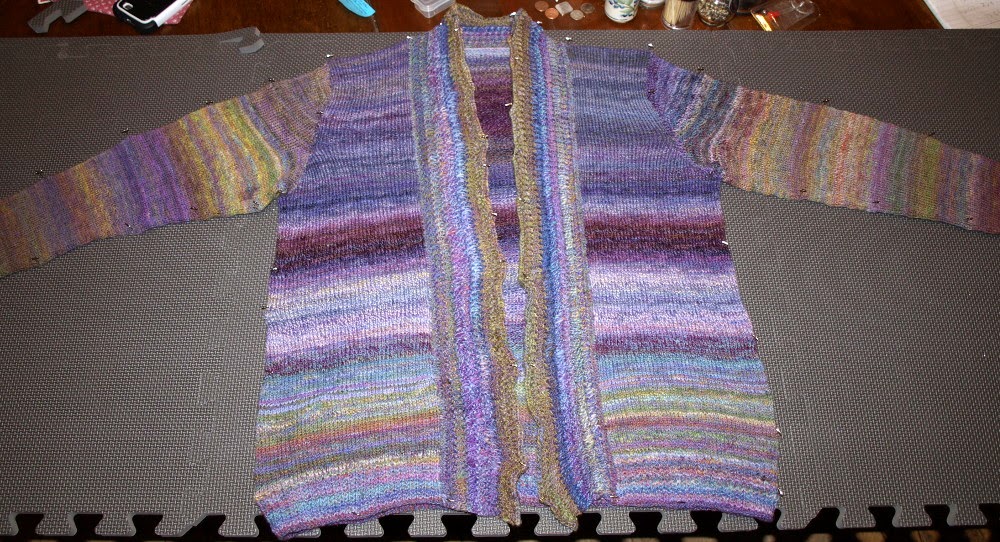 That front band had to be reknit, because the first time it was too short, and couldn't be blocked long enough.  This one is a tad too long, but I'm OK with that.  No buttons or closures, although I might get a clasp of some sort.