So, since coming back from my little musical vacation, I've jumped back into weaving the placemats as much as possible so I can get them done in time for the wedding in early October.  I have the draft memorized, so the weaving is easy enough to get 2-3 done in one session.  Plenty of yarn available, pirns wound - check.  I only had one more mat to go before the project was done!

Weaving commenced, and all went swimmingly.  I wove  three pattern repeats, but as I started the fourth, the measurements were not consistent with what I had measured on the other mats.  So I looked at the newly woven cloth as it was heading towards the cloth beam, and I saw my mistake right away:  I had repeated a section of the pattern that was not meant to be repeated, and I had done it a pattern and a half back.  I started to unweave, but soon realized that this called for more drastic action. 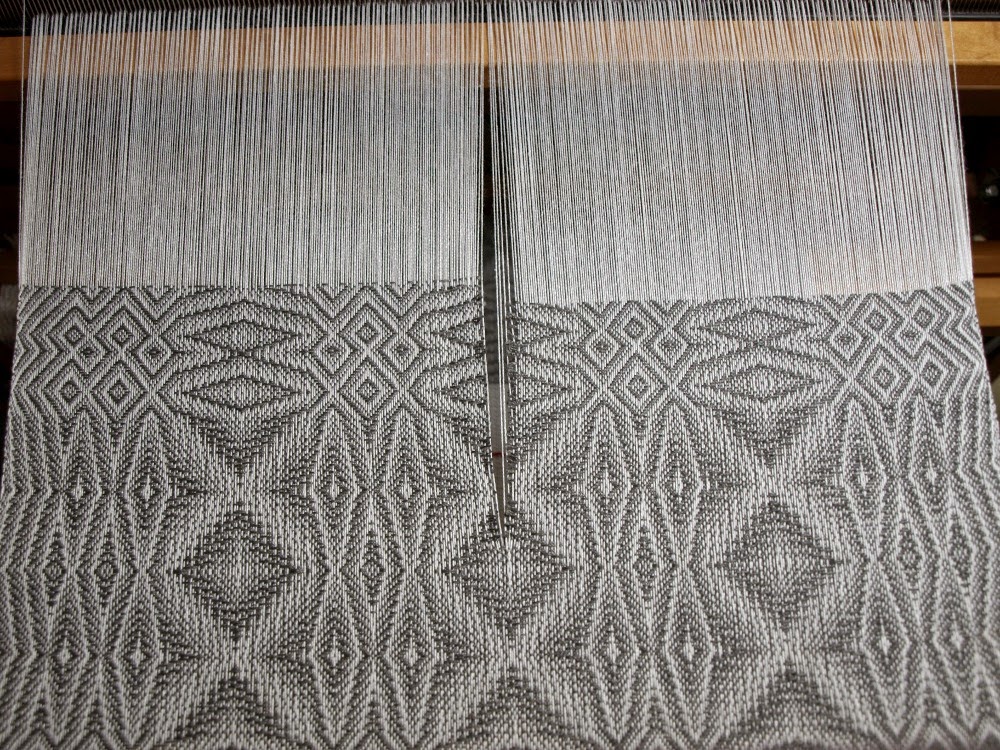 Yep, I decided to cut out all the weft and start again.  You can see the mistake above - the diamond-y shapes that look like mirror images of themselves (the cut line almost reaches the middle of the mistake). Those make up the "arms" of the crystals, and there's only supposed to be one set.  Surprisingly, the cutting was the easy part - pulling the weft out took a lot more concentration and was more "fiddly."   I ended up pulling out quite a bit of one side before tackling the other. 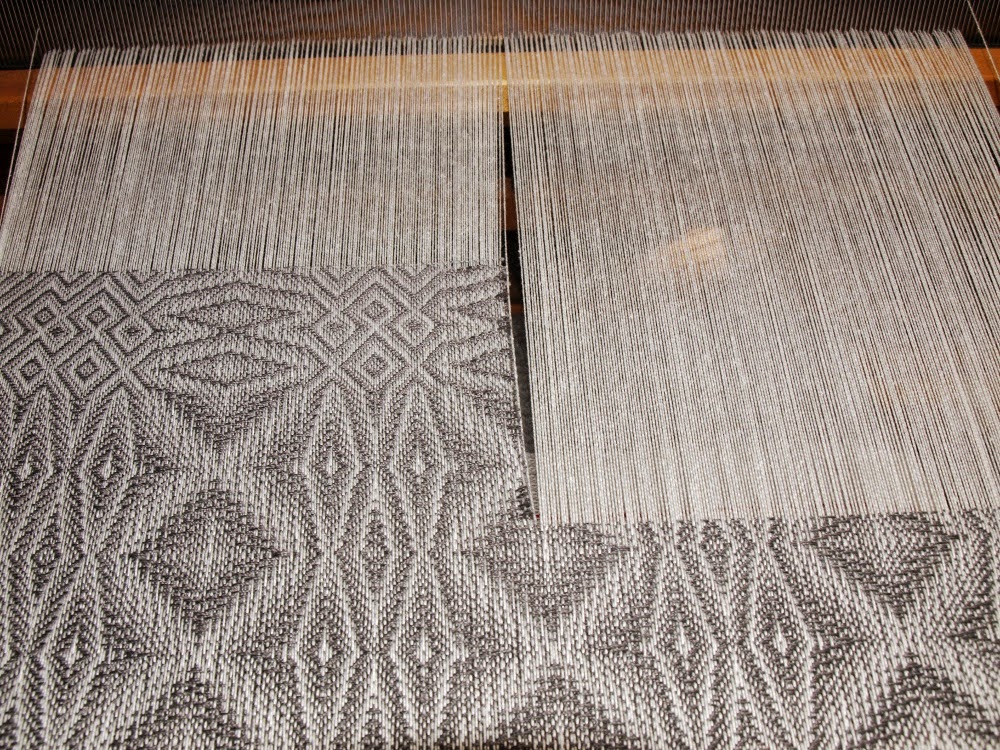 I was feeling pretty good about myself once I fixed that issue!  Onward and upward!!

The original plan was to weave each mat to 26" under tension, but when I wove the first one, including the 4 planned repeats at the beginning and end of each mat, I saw that it was much shorter than 26", so I increased the repeats to 6 for the wedding mats.  (Yes, I know, I should have sampled!!).  Because I had already woven one mat with 4 repeats, I thought I would weave 3 more identically so I would have a set of four to put up for sale in my Etsy shop.  As I got towards the end of the warp, I had just enough left to weave one of the smaller mats, so there would be an extra just in case - bonus!! 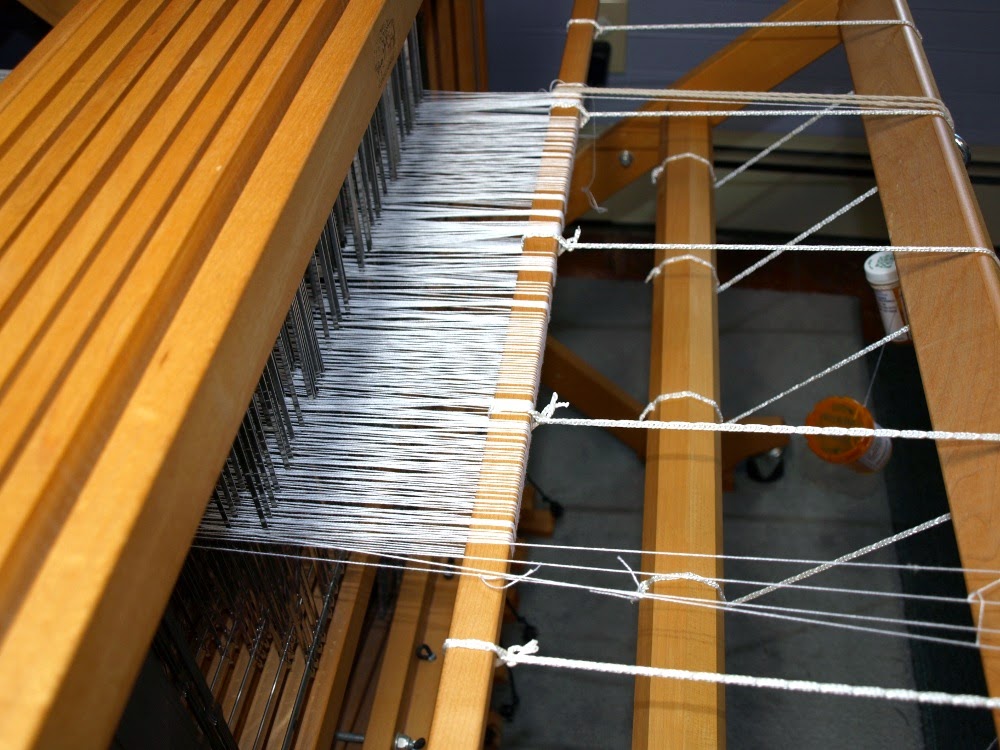 By the time the warp was woven, I had had to repair quite a few ends, as you can see.  It was like an emergency room back there! 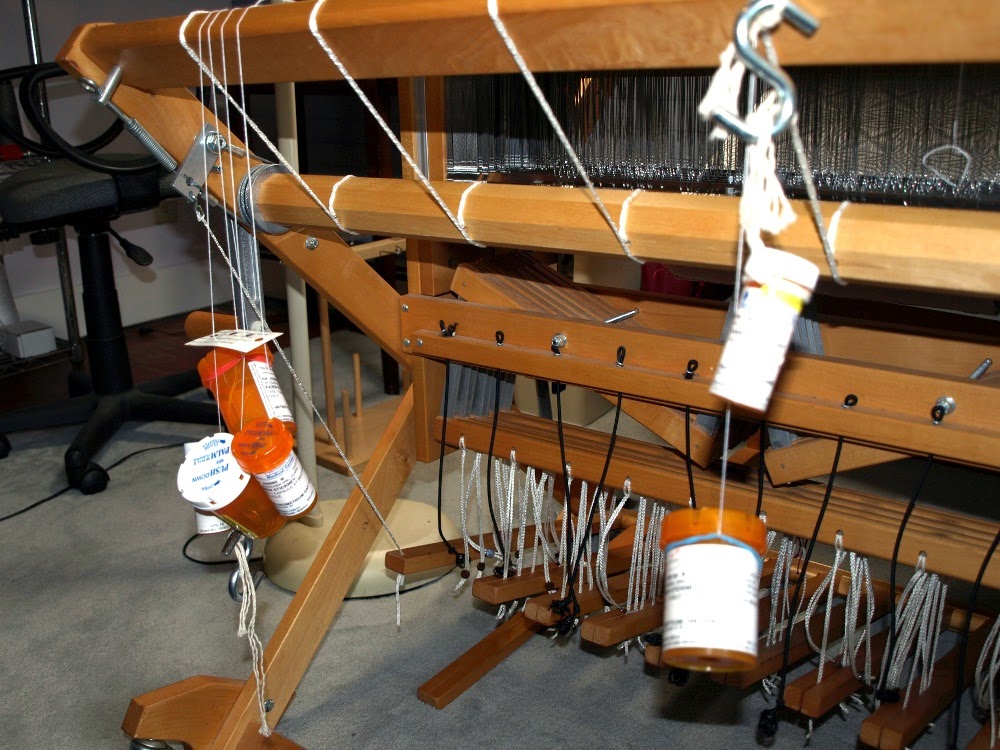 Yesterday was the big day, the day to take them all off the loom and start what I call the processing part of weaving; sewing, cutting, pinning, sewing some more, etc.  And that's when I saw it, the error that threw a huge monkey wrench into the whole project.  One of the wedding mats (with 6 repeats), did not have the 1.5" of white 20/2 hem on one end.  I had finished the previous mat, including hems, then threw 2 shots of red for the cutting line, then started to weave the body of the next mat without weaving another hem!  I've done this same thing once before, ages ago, and it is one of those errors that you can't work around.  I don't know how I missed such a thing when I did it.  I thought about making two hems from the single 1.5" hem, but then all of the hems would have to be that short, which would create thicker hems due to the extra material, and much shorter mats.  Aaarrgghh!  (Sorry, no photo - I was just too disgusted to think of getting the camera).

So, I am yet again under the gun, and putting another warp on the loom.  I am putting on enough to weave another set of 4, in addition to the one mat I need to complete the order.  At least I can cut the first one off as soon as it's done, so the time committment will relax a bit.

And speaking of warping, I have noticed that since I've started using a warping mill, I am having terrible tension issues when putting the warp on the loom, and I don't know why.  All I can think of is that the ends have to change from one plane to another twice, so maybe that causes the issues??? The pegs are horizontal (parallel to the floor), but the yarn then gets wound and builds up vertically, before going back to horizontal at the other ends.  Does anyone else find this to be the case?  Any sage words from more experienced weavers??  Just putting the second, shorter warp on today, I thought I wouldn't have any problems because it was only 4.5 yards long, but I was mistaken.  I had a terrible time winding on.