The last time I posted, it was to tell you that I had to measure another warp in order to complete the set of eight placemats ordered.  The warp went on with tangles, despite being wound under even tension on my mill (I really must find out what I'm doing wrong there!), but it went on none the less.  Threading, sleying and tying on happened without a hitch.  I wove another placemat with 6 repeats, following my notes from the previous warp.  Once completed, I wanted to do the finish work on that one mat before weaving the rest of the warp, so I decided to try a method I had read about.  Peggy Osterkamp has published a method for being able to cut something off the loom and tie the rest of the warp back on without having to resley, etc.  There had been some talk about it recently on Ravelry, so I took notes and dove in.

At the end of the piece that was to be cut off, I wove a couple of shots of tabby, then another inch of tabby in a contrasting yarn.  I then placed two sticks, one in each tabby shed, then wove another inch of tabby.  Steadying my nerves, I then cut the woven mat off, and this is what was left; 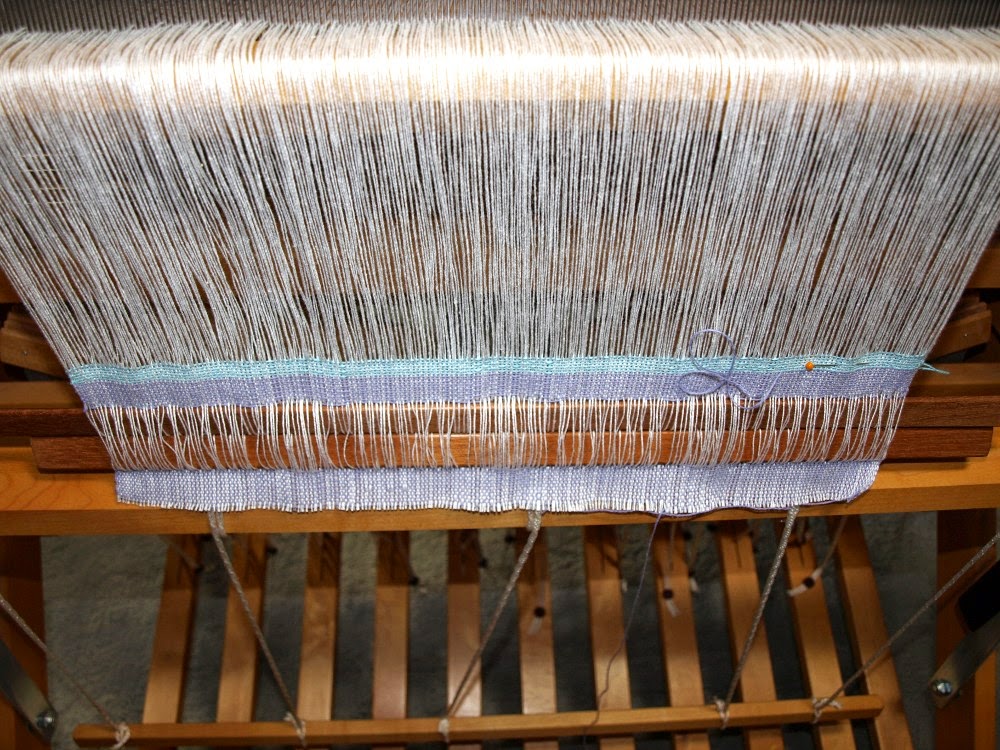 Then, I folded the sticks on each other, which gave me a finished edge to tie onto the front of the loom. 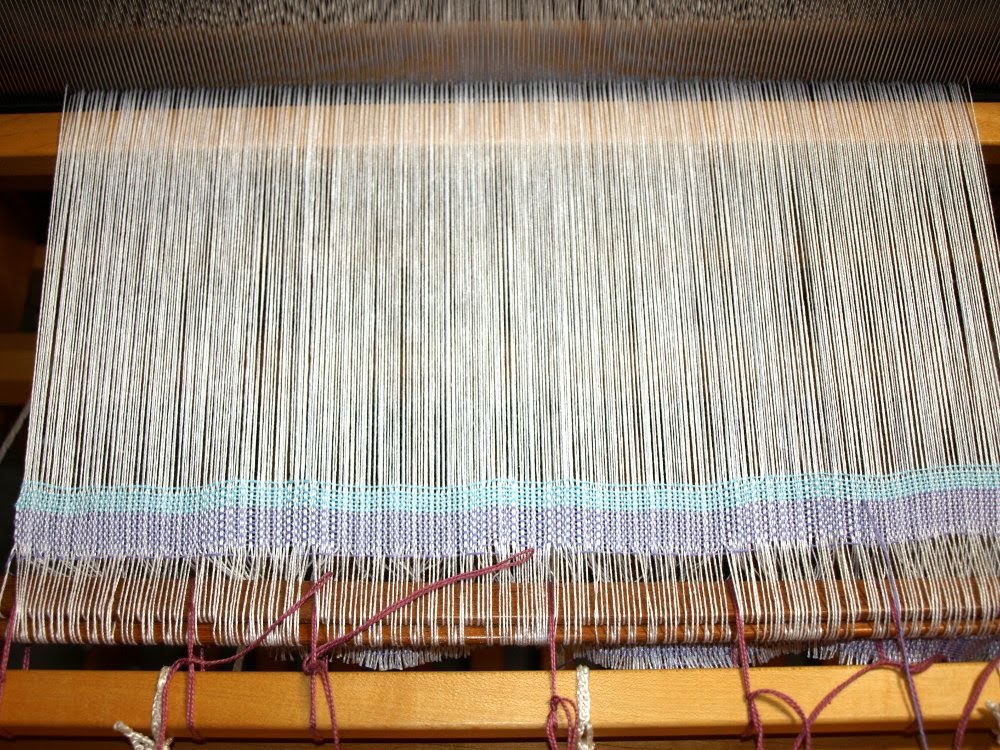 I used doubled 3/2 mercerized cotton for the ties.  I think my sticks were a bit too thick, though, because they wouldn't lie aligned with each other.  Next time (and yes, there will be a next time - sigh) maybe I need to weave a bit of tabby between the sticks.  Because they wouldn't align, it was harder to place the cotton ties against the wood without grabbing some of the tabby weave.  And, as you can see, the fell line was not exactly straight afterwards! 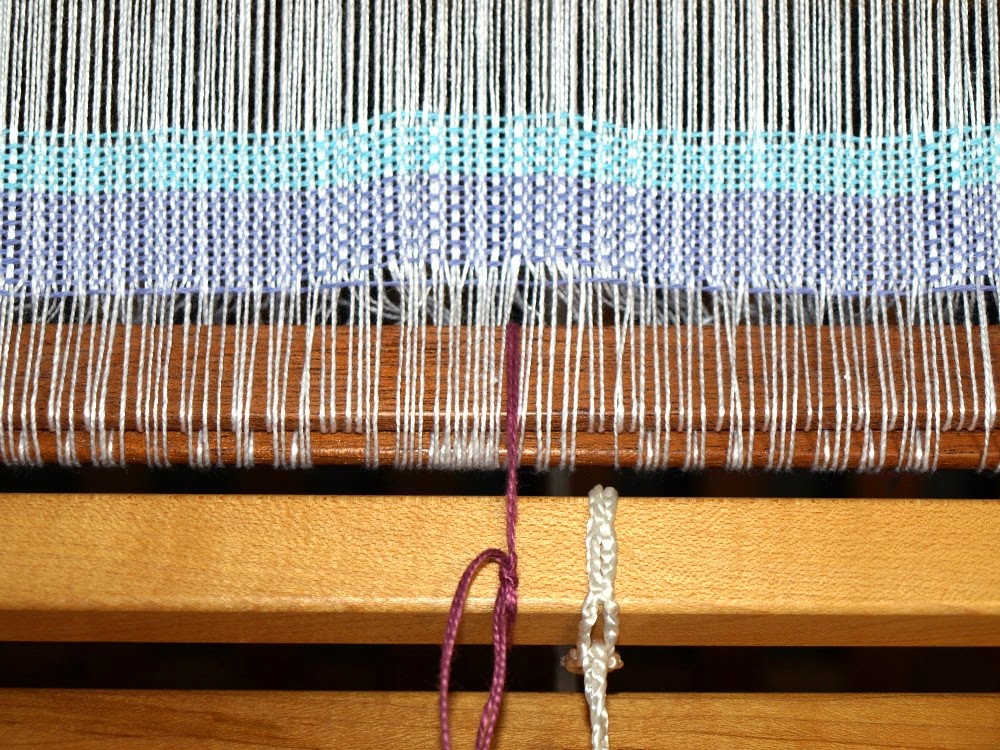 If you can believe it, I had yet another surprise after I hemmed and washed the newly woven eighth mat - it was too long. Not by a little bit, but by 4 inches!!  Somehow, despite following my notes (I thought), I wove one pattern repeat too many.  I swear, I do not know where my head is sometimes.  I was supposed to deliver the finished products two days later, but I had to work those two days, so there was no time to weave another.  I brought the runner, the 7 matching mats, and one of the slightly smaller ones to the recipient, explained the situation, and gave her a choice.  She could A) give 7 matching mats, B) use one of the smaller ones to make up a set of eight, or C) have me try to weave another mat to match.  The wedding is not until Oct 11, so there would have been time.  She chose to take a smaller one, stating that no one would notice.  Of course, to me it is a glaring difference!  She was very appreciative, for which I was so thankful.

So today I sat at the loom again to weave however many smaller mats I can get off of this warp.  It wasn't long before I thought I felt a 'pop.'  Then another.  Yep, the ties were breaking under the strain of a tightened warp.  I fished out some nylon cord, and had to lash the sticks on from under the loom, which is no easy feat when the loom is a Baby Wolf, which is pretty small.  So far, it seems to be holding!

And looky what came home a week or so ago: 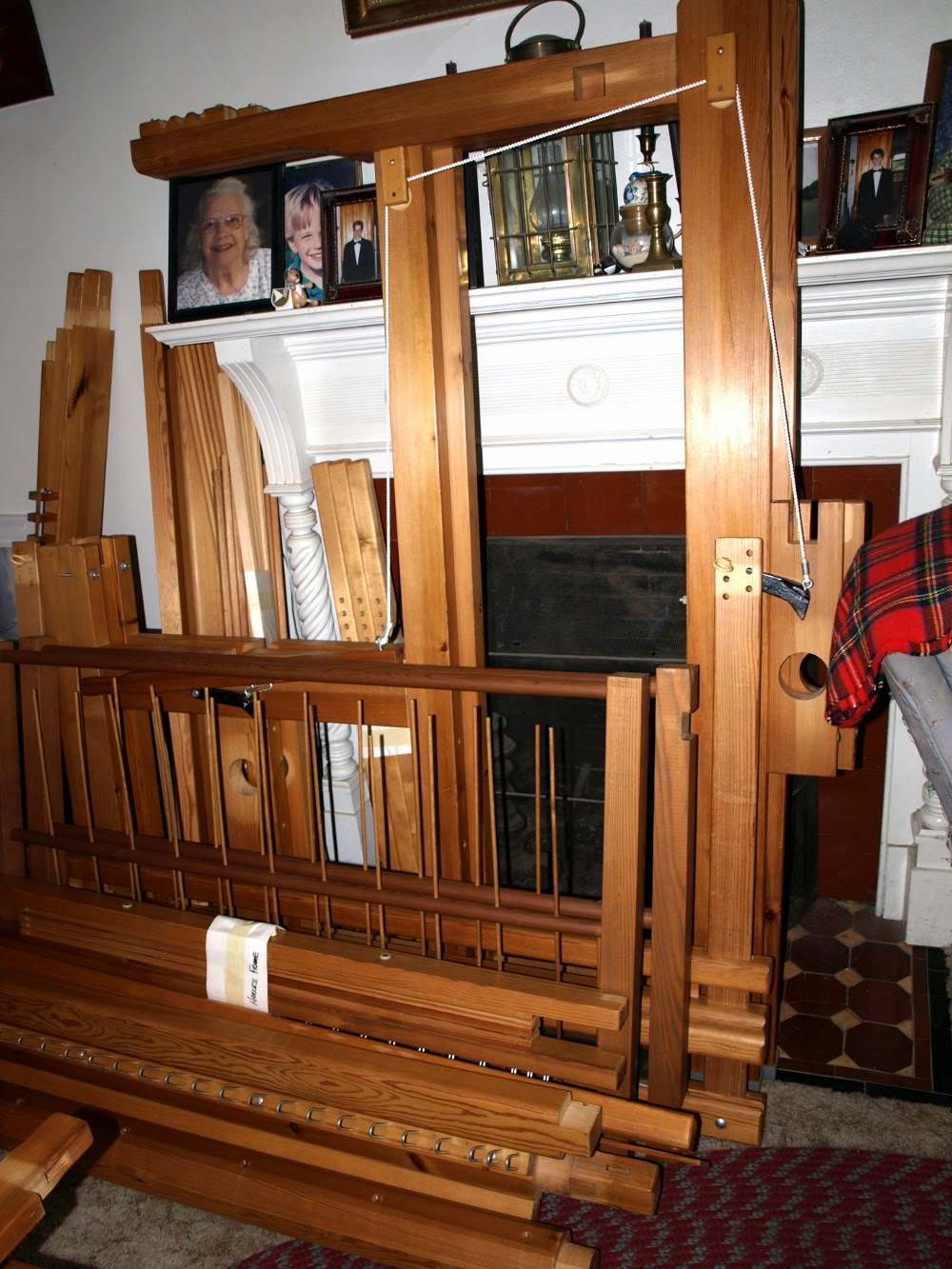 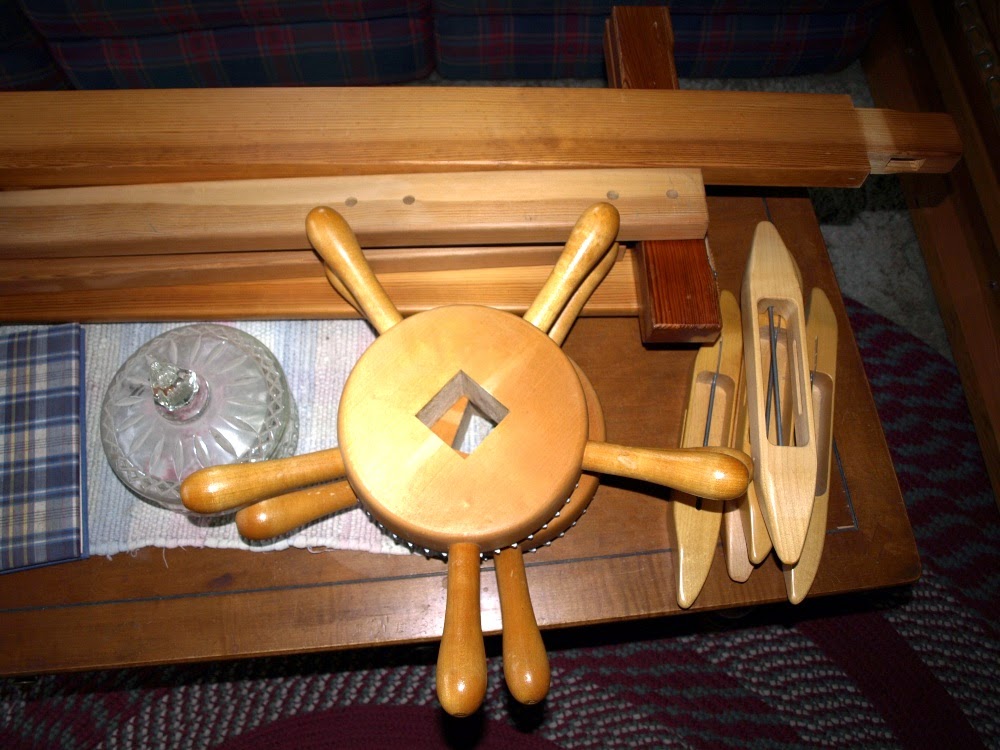 Sticks!  Of wood!  That is slowly becoming... 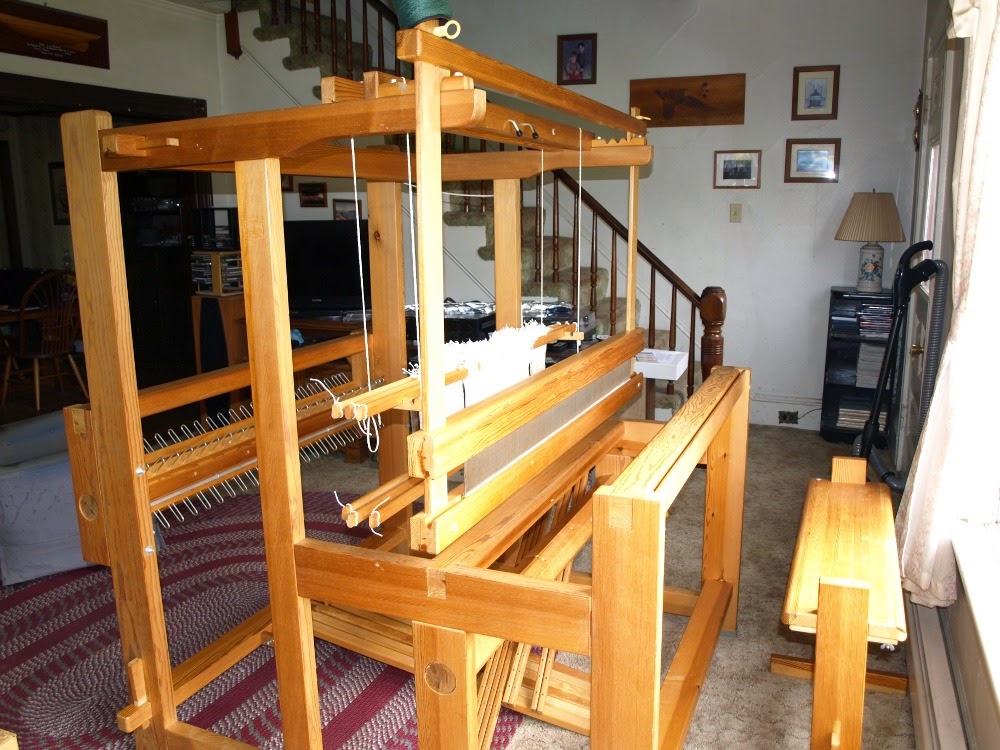 a Glimakra Standard countermarche loom!! 47" weaving width, 4 shafts for now, but room for 8.  It is so very different from any loom I've used, that I see a HUGE learning curve ahead of me.  Which is great, because, you know, my brain has been great at keeping track of things lately!  And it is so enormous!  It takes up almost half of my living room.  Ideally I'd love to get it upstairs, and since it comes apart and goes together relatively easily, it can be done, but my little tiny loom room would be a bit overwhelmed.  I just really like having a weaving space where I don't have to worry about kitties getting mischievous, and the living room is their playground.  Any words of wisdom about these kinds of looms would be great.  I have to come up with an easy, smallish first project to put on her, to work out the kinks.

Anyone know of anybody out there who would like a Leclerc Fanny 45" loom?  It comes with a sectionaly beam, tension box, spool rack, and a shuttle, located in midcoast Maine. Asking $650, local pick up only.