I caught this ad for a used loom the other day.  Despite my best efforts to ignore it, I kept looking at it and finally contacted the seller.  It is located quite a ways away, north of Bangor, and has been used in a school, which is pretty cool.  It is an older 4 shaft Nilus Leclerc Fanny loom, 48" wide.

It's larger than my present loom, so I could weave some of the wider things that I've wanted to do for quite some time.

It's also heavier, so I could finally try rug weaving.

It is a counterbalance loom, so the shed will be larger, so, um, I could try rug weaving...

It's larger than my present loom, so I'm not sure where I can fit it.  It will fit somewhere in the bedroom I use as a studio, I think, but my brain thrives on order and space, and if the room becomes too cluttered and/or confining, I won't be able to think or create well there.  I'm certainly not willing to part with my smaller 8 shaft loom, though that can be folded when not in use.

I barely have time to weave on one loom, what in the world makes me think I have time for two?

My brain just checked out, so I can't seem to come up with any other reasons, pro or con, at the moment.  Here's a photo to whet your whistle. 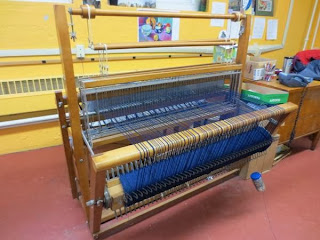 My husband is all for it, so that's a good thing, especially because he's the one with a truck.  There's so much about this loom that I would have to learn about, which can be both a good and a bad thing.