It's been quite a week here, and it's not over yet.  The weather has been beyond cold, with highs in the teens and lows in the single digits.  That's more suited for late January or early February.  We've only had a touch of snow, but are going to get walloped on Sunday.

There has been a lot of travel for me this week, which is the first "dis:" distance. Three days of long distance driving, which is not at all my idea of a good time, as anyone who knows me can attest.  I'm a real homebody when I'm not working.  So far, I drove 1.5 hours to the dermatologist, so she could look at some things on my face that have been there awhile but won't heal.  Sure enough, they were pre-cancerous lesions, which she sprayed with liquid nitrogen. Can I just say - OUCH!! Two sprays per lesions, and she found three, including one I didn't know about. That was a couple of days ago, and now they are losing the outer skin so they are weepy, red and sore - how festive!  So, DIScomfort and DISfigurement at the moment, although that will be temporary, I hope.

Yesterday hubby and I drove 3 hours in the opposite direction to go look at that loom I showed you in my last post.  We got home quite late, so pieces are all over the house.  I'm still not sure it's going to fit in my "studio" aka spare bedroom.  It's going to be tight, if it does.  Besides the loom, 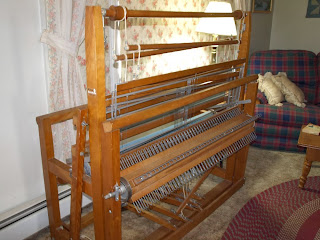 it came with bench full of stuff, 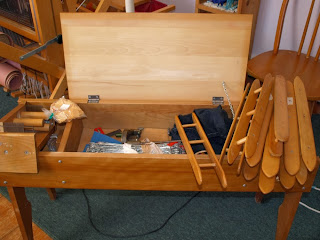 including a bobbin winder, yarn counter, lots and lots of extra heddles, 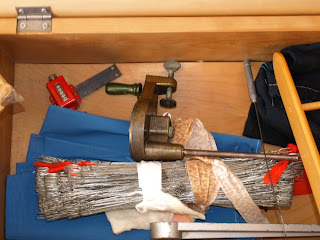 a tension box and a bag full of small, plastic squarish items from Halcyon.  She didn't know what they are for, and I don't either.  Does anyone out there have a clue?? 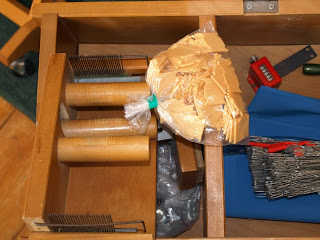 It also came with a spool rack from Leclerc, 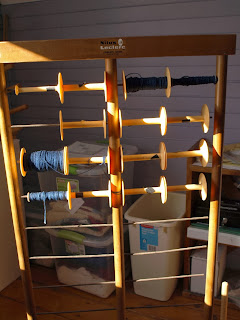 and a LOT of yarn.  It's called Denim, and I now have many, many cones of black, plus some medium blue and an off white.  I've never heard of that yarn before. The labels say it will shrink significantly length-wise, and fade over time.  Has anyone used this yarn in their weaving?  I'll have to try a sample, but it may be destined for Goodwill if it's not suitable. She mostly wove rugs and used it as warp. 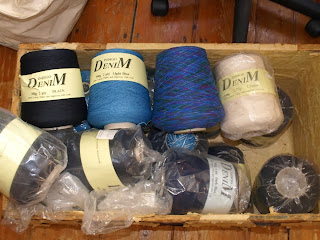 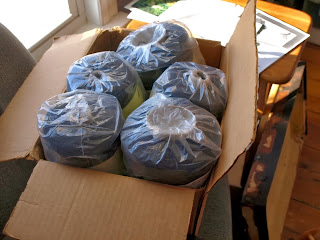 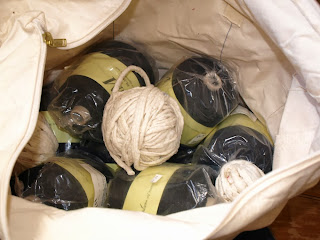 Those balls are batting from quilt edges that she used to spread the warp.  I can certainly use those!

Now for the last "dis:" DISappointment.  After some of the issues I've had lately, feeling like my weaving mojo was gone, I chose to weave a simple 8 shaft pattern for some quick holiday towels.  The "Holly Towels," from Interweave's Ten Top Towels on 8 Shafts looked simple enough, and I already had the yarn.  The draft called for 10/2 cotton, sleyed at 20 EPI.  That seemed really loose to me, especially for the twill sections, so I decided to sley it at 24 EPI.  The 3" tabby section was fine, but when I went to weave the twill section, both selvedges swooped upwards, creating that "smile" on the fell line that we all hate.  There was some draw-in, to be sure, but nothing that should have created the issues I've had here.  There are 6 ends on either end that are threaded for tabby, and they seem to be the source of the problem.  This photo 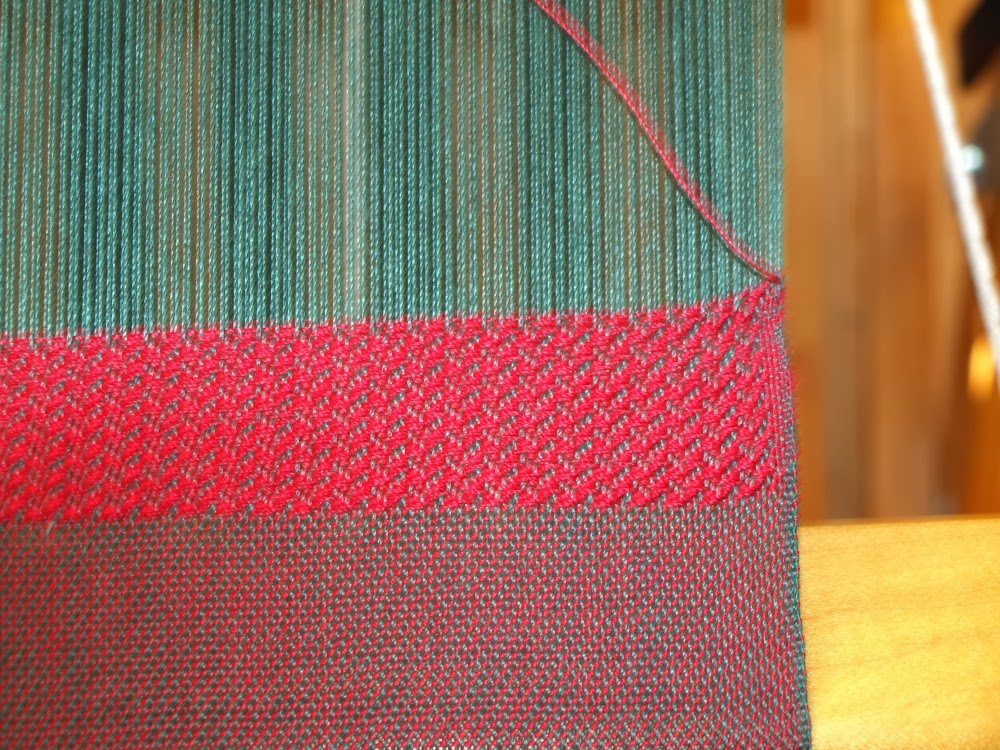 is the point to which I've unwoven back to 5 times!  The edges are so arched, that the next throw of the shuttle brings the weft into the warp over an inch above the fell line.  I've tried tightening the first and last warp ends, loosening them; I'm at a loss at this point.  The tension feels even, there are no crossed threads.  Does anyone have any advice?  Could the EPI have anything to do with it?  If anyone out there has woven these towels, I'd love to hear your take on it.  I'm thinking I'm going to have to cut and resley them, but I don't want to make another mistake, since I might lose one towel as it is.

Still to come is a trip to Portland to see the symphony's Magic of Christmas show. It's always a wonderful show, so I'm hoping that will finally get me in the Christmas frame of mind.  It means another long, cold ride, but we're missing the big storm, and I'm sure we'll enjoy it!