Last time I said I'd be sure to show you pictures of the fringe twisting project.  I anticipated the job would take a lot longer than it actually did.  I worked on it last weekend, and got one edge done on Saturday, and the other on Sunday before I went to work.  Not bad, considering the last time I twisted fringe it was for a much narrower scarf, and had to sit almost all day to get one side done.  I guess the weaving gods were looking upon me kindly last weekend! 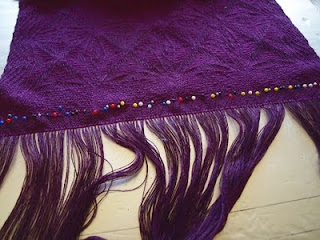 This photo shows the set up before twisting.  I've carefully (and very frequently, as you can see from the photo) placed pins along a straight line, ensuring the the edge of the cloth is straight.  This way, when I place the pins in the knots at the base of the fringe, all of them will be knotted at the same length. 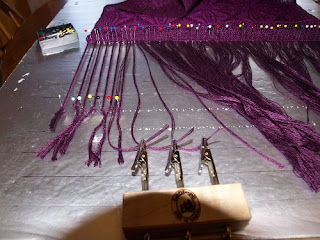 This photo shows the beginning of the fringe twisting.  I pick out three sets of three threads and place them it the twister clips, trying to clip them at even lengths.  What you can't see is the second part of the contraption, a small piece of wood attached to the metal posts that the clips are part of.  They are offset by a 90 degree angle, so that as you grasp it and turn it, the clips will turn.  So 35 twists to the right for each fringe, followed by CAREFULLY unclipping the threads (now full of very active twist), and clipping them together on one clip.  You then turn the bottom piece 35 times in the opposite direction (i.e. to the left).  Again, after carefully removing the fringe, you make an overhand knot, insert a pin, and place the pin on a line parallel with the line that the cloth is pinned to.  I have several lines drawn at 1 inch increments, but I chose to pin this fringe at 6 inches. You can see a few finished fringes at the left side of the photo.  (Sorry about not have photos of much of the above procedures - hard to take a photo when you need two hands for the job!). 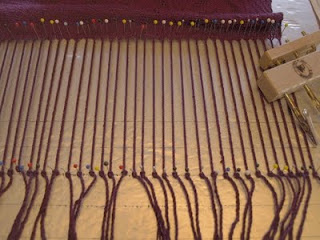 (Sorry about the quality of the above photo - for some reason I couldn't get it to come out as clearly as the others).

This shows the completed pinning, and you can see the bottom of the fringe twister on the right hand side, near the corner.

After this, the fringes have to be trimmed, so I placed a firm surfaced cutting board (not the kitchen type, but the plastic kind that quilters use) under the fringe, up against the pins, and trimmed them all to 1 inch.  Into the washer it goes, and after ironing and laying flat to dry, this is how the fringe looks: 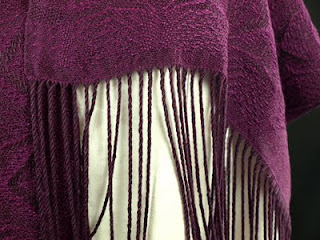 And the finished shawl: 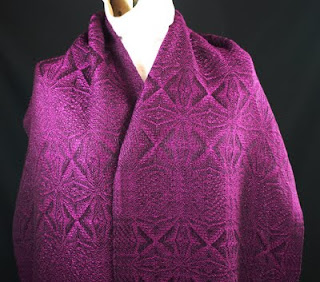 I'm quite pleased with how it turned out.  I'll definitely weave this pattern again, maybe in off-white.

Since then (last weekend), I've measured for and finished weaving a set of 6 placemats.  One of the shops I consign with wanted them, 2 to sell to a woman who had just purchased a set of 4, and 4 to replace that set.  However, apparently the woman's brother came and bought another set of 4 to have as a matched set, so she only needs the replacement set.  I guess I'll keep the other 2 for now, which I'll add to when I decide to weave them again. 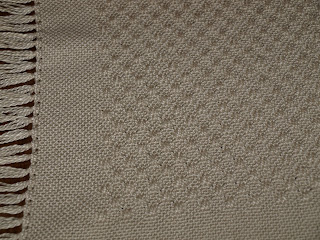 I think next up will be a set of log cabin towels in blues/yellow/natural. I wove one set already but gave them to the store after selling a couple at a craft fair, so I need some for my Etsy shop.  I'm trying to build a stock of items, both so my shop doesn't look so empty, but also in anticipation of the big Christmas craft show I'm going to in November.  This would all be so much easier if the weaving (and knitting) process took less time!!!