A Conundrum - or Two

I've been wanting to weave an 8 shaft snowflake shawl since well before I got my new-to-me Baby Wolf loom last September.  I've admired other, more talented weavers' works for several years, especially Susan, a weaver from Vancouver, whose blog Thrums (http://weeverwoman.blogspot.com/) is chock full of advice, technique, and photos, photos, photos.  She sent me the draft for this shawl soon after I acquired the loom, but other projects, and not an insignificant bit of fear, led me to put the project on the back burner.

Having just finished a warp of towels and scarves for a spring craft fair and for consignment, I find that I now have the time to devote to weaving the shawl.  This has created a couple of conundrums, however.

The first is all about color.  I always envisioned this pattern woven in a deep, rich eggplant purple tencel, and so bought a cone many months ago.  I placed it on the shelf, and admired it periodically as I grabbed for more cotton, or for other tencel yarn meant for scarves.  When I went to wind my warp the other day, I noticed that the cone seemed a bit on the thin side.  I know that the 1 lb cones are rarely exactly that weight, but compared to my other 1 pounders, it looked only about 3/4 of their size, if that.  I told myelf that it must just be my imagination, and proceeded to wind my warp.  Now that that chore is done, I'm more sure that I don't have enough for the weft.  This has led to a great debate about color.

Initially, I had thought that a monochromatic shawl would show the pattern off just enough to make an elegant accessory.  Now I wonder if that would be the case, or whether some other color would set off the pattern better, without taking away from the look I was aiming for.  I know that the answer to this is SAMPLE, and I did wind a bit of extra length to allow for that, but since I'd have to order more eggplant and risk getting a different enough dye lot to cause issues, I'm leaning toward using red purple for the weft, after sampling with the eggplant for future consideration. 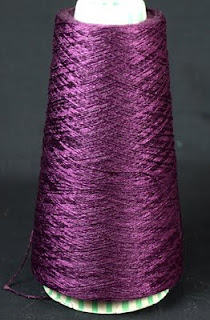 The color isn't quite true to life, it's actually a bit darker and richer than what is shown.

And here's a photo of the red-purple: 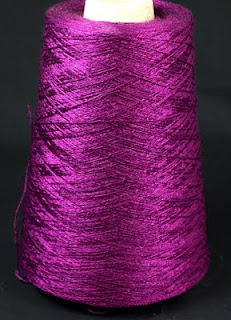 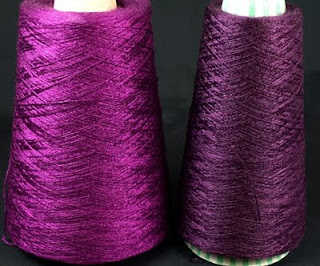 Once I get the warp on the loom, I'll post the sample to show you.  Hopefully the red-purple won't overwhelm the warp.

The other conundrum that is really bothering me is how do I allow myself time to weave things for me to sell, instead of hurrying to weave things for the 2 shops that I consign with?  One shop, "Monkitree," near Augusta (my state's capital, though by far not its largest nor most vibrant city), is a boutique and art shop that opened last spring.  I've been working with Clare, the owner, since then, and she's done a good job of promoting her store.  I sold several things over the summer and into fall, but the pace really picked up for the holidays, and I barely had enough time to eat, sleep and work given all the time I was devoting to weaving.  I also attended a craft show in early December, and sold a few things myself.

The second shop, "The Blue Tulip," is a small gift shop and boutique in the village near where I live.  The owner had contacted me after surfing through Etsy looking for Maine crafters.  Her consignment percentage is a bit smaller than Clare's, but the prices she thinks will sell my handwovens is also smaller.

I'm not sure why I feel so compelled to weave for the stores more than for my own shop.  If this past year is any indication of what is to come, the shops will do a better job than I can of getting people "in the door," increasing the exposure needed to sell.  But the amount I earn from these consignments is awfully small, in some cases barely enough to cover expenses.  I tell myself that any sale is better than none, and that it all leads to more customers, some of whom may look online the next time they want something.  Even with this shawl project, I'm fighting the urge to quickly weave up more towels or other quick projects so I have more to send them should they ask.  My Etsy shop is pretty empty, and people who have looked at it have noticed.  I'm trying to give myself permission to weave for me, to allow myself time to take a daily walk, relax with my kitty, and enjoy weaving.  Get off the hamster wheel, Karen!  This is supposed to be an enjoyable hobby!

Phew. On that note, I'll be off.  I have the warp ready to put on the loom, but I'll be sure to do it with a cup of coffee handy to make it more relaxing...
Labels: color consignment shawl