Sigh.  I know I haven't posted for awhile.  Again.  I'm not sure whether it's the holidays and the adapting that we all have had to do around those traditions, the ongoing and ever increasingly bad pandemic, or all of the insanity happening in DC, but I seem to have ZERO creative drive right now.  I really thought that starting a project before the holidays was a doable thing since not a lot was going on, but my latest towel warp has been languishing on the loom, awaiting threading and sleying.  It doesn't help that the warp is natural in color, so nothing to please the eye, YET.  Over the last two days I have forced myself to go to the loom, and can report that I think everything is ready to start weaving.  Now I just need to start, since after that the pattern and colors should be enough to bring me back every day.

The nightmare that happened at the Capitol this week has overtaken most of my attention.  There are so many elements that are worrisome, not the least of which is the president's (small 'P' deliberate) behavior prior to, during, and after the attack.  The fact that he has now delivered a speech "condemning" the attack means little, since it is obvious that the speech was given under duress at the urgings of his aides.  He has always only cared about himself and how he can benefit from situations, and it seems he really thought that there could be a successful coup that would keep him in office.  Those beliefs will not just go away because he will be out of office.  As long as he has access to the internet, he will continue to foment hate for anything that does not benefit him.  The fact that there were so many other elected officials willing to go through with trying to eliminate certified votes from some states is so disheartening.  Perhaps they did it to continue to have the backing of Trump supporters, but there is no excuse for elected officials to behave in such a way as to go against their Constitutional duties.  It seems that elected officials who do not uphold their sworn duties should be relieved of their office.

Then we have nearly half of the country who supports the president and believes everything that he has lied about for 4 years.  They will not listen to reason, they will never change what they believe.  Recently I've seen that his supporters now think that T's video condemning the violence is a fake, computer-generated speech.  There are claims that the attack was a choreographed performance by the left to make the right look bad.  Funny, but T's speeches before and after seem to indicate that he was urging them on and supporting them ("you're special," and "we love you"), so they MUST have been "his people."

The rioters came equipped with arms, including automatic assault weapons, homemade napalm and molotov cocktails.  They had zip-ties for cuffing members of Congress.  These are not the actions of people that are simply unhappy with the election results.  These are insurrectionists intent on taking over the government.  Most are going to go back to their lives, continuing to troll the internet to find content that supports their views.  They are not going anywhere.  How, as a nation, are we to come back together so this kind of violence never occurs again?  How can we get to a point where people go back to believing the results of elections?  Sure, people will be disappointed when "their" people don't win, but to absolutely be certain that the results are fake, that votes were stolen?  After T was elected, the left was shocked and VERY upset.  Many marched, many shouted "Not my president!"  That did not mean that he was not THE president.  There were no breaches of federal buildings, no talk of overthrowing the government.  Yet many on the right are equating the marches in 2017 to what just happened in DC.  I can't see any way that clarity can be brought to folks who CHOOSE to ignore fact and embrace fiction.  If we, as a country, cannot agree on what is real and what is not, there in no clear path forward.  Sigh.

As you can see, the events of this week have totally taken over my thoughts.  I was alone when I heard what was happening, and just the fact that I couldn't immediately share my fears and disbelief was overwhelming.  I finally reached out to my weaving buddies on Ravelry, asking for a "Canadian Support Person," a ongoing joke in the group when things get awful here.  One reached out via email and was so helpful in being a sounding board for my tumbling thoughts.  I just love the group we have on Ravelry; they are so supportive and funny and talented.  Hopefully some day we can meet in person.

I wrote the above draft yesterday and wanted to let it marinate overnight, and I'm glad I did.  Lots of grammar and syntax issues, but nope, no change in my opinions.  Banning T from Twitter is definitely a start, but the internet is a vast uncontrolled place, so I'm sure he and is followers will continue to find ways to rile each other up.

I did, however, manage to get the loom this morning and finally start throwing a shuttle again.  It was a slow start, but a start none the less!  As you can see below, I used black to "test" the warp for errors, then started with the first color, green aqua.  I like it so far! 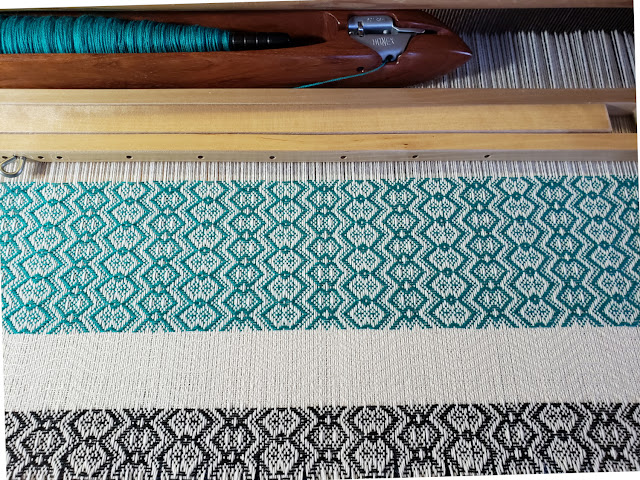