I'm baaack!  Tentative steps to be sure, but after almost 5 months (!), I felt I needed to start getting back into the swing of things, despite the incredible changes that have happened since December.

Personally, it took me a good 12 weeks to recover from the multiple pelvic fractures from my icy fall in mid-December.  I attended quite a few PT treatments, which helped tremendously.  Somehow, after the last visit, I developed swelling and pain in my left foot, which persists to this day.  I had some physical therapy for that as well, which helped some, but the swelling persists.

A few days after the fall, I began experiencing the unpleasant symptoms of my now-diagnosed auto-immune disease, microscopic colitis.  It caused months of digestion and elimination issues, which led to unwanted weight loss.  Once diagnosed, a 2 month treatment plan was undertaken, which was successful.  I am thrilled to be asymptomatic at this time, but as with my celiac diagnosis, this disease will be with me for the rest of my life, and will probably reappear at times.  At least the cause will now be known and treatment can begin much more quickly.

I also suffered a loss of a family member in mid-January.  My aunt was a very unique individual, who had led a very active, singular life.  She was very smart, accomplished, and did not suffer fools.  We had a lovely relationship, but had to space out our contacts because of her need for privacy and limited social engagement.  She passed away suddenly at her home in NY, which is probably the way she would have wanted to go, but the suddenness took me by surprise, as you can imagine.  She was my mother's only sibling, and was the last living member of that branch of the family (my mother died in 1984).  That loss seems harder because of that, somehow.  I had spoken with her on her birthday the week before, and for that I am grateful, but am still processing her death and the aftermath.

And then, of course, there is the virus.  Maine has so far done a good job of keeping the cases and deaths down (to date), although that could easily change as things begin to open.  One reason is because we have a relatively large state and few residents, so a lot of the state is sparsely populated.  However, we also have an older population, and a large segment of people with poor health and risk factors.  It has been very stressful for everyone, obviously, and I for one am very thankful for the leadership and care being taken by our state's governor and CDC.  It's been difficult to not be able to see our family in person.  We have a long-standing Skype "date" with our younger son once a week, and my older son and his young family have managed to have a couple of similar "meetings."  Our amost-2 year old grandson is changing so quickly, and I am saddened by all that we are missing, but understand the reasons why we all have to stay apart.  Once a week I make a quick dash to the grocery store, and once last week hubby and I made a quick trip to a big box store, keeping out distance from everyone.  We do not know of anyone that has acquired the disease yet, thankfully.  I am hoping that everyone who reads this is as lucky as we are.

I have also had a change in my employment status.  Being an RN at a small community hospital, I found that the anxiety surrounding work was more than I felt I could handle, so I changed from an hourly employee to per diem, so that I could stay home until this pandemic has passed.  I felt that my risk was much higher due to the treatment for colitis which causes a change in my immune system.  Also, since some people are asymptomatic, and I worked in potentially emergent situations, there might be an exposure that could not be pre-determined.  Since then, I have actually retired fully, and it has felt like the right decision.  I miss my coworkers and aspects of my job, but now realize how much stress I had been feeling and dealing with for a long time.

Here in Maine we are finally seeing the weather begin to change to a spring-like pattern!  March was unseasonably warm, but then all of April and half of May because quite cold and stormy, which included some SNOW!!  Talk about a slap in the face!  Anyway, this week, the temps are headed in the right direction and things are finally beginning to sprout.

Here is an early picture of our fire bush; 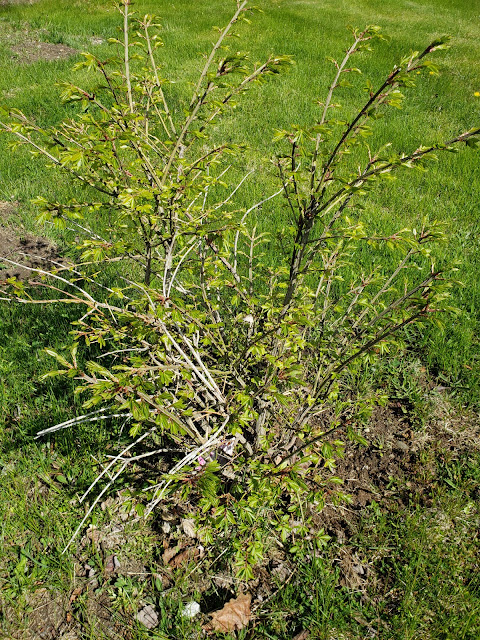 and our lone magnolia bud.  I'm not sure why our little tree is lagging so far behind the others in this areas, which have been in full bloom for at least a week or more; 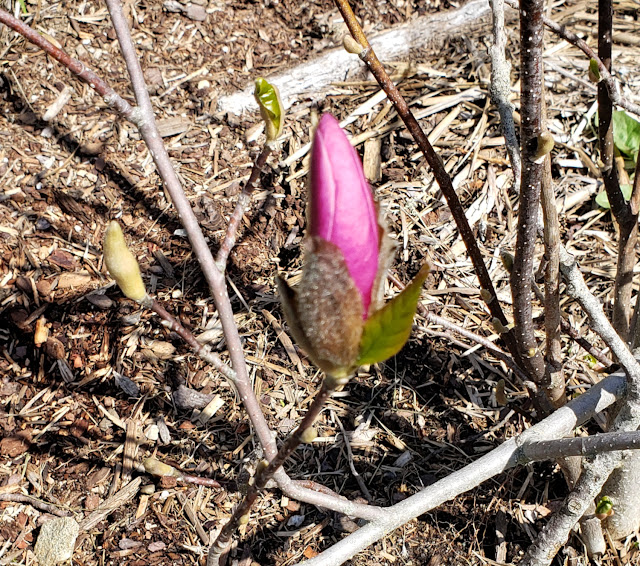 here are some chives and day lilies; 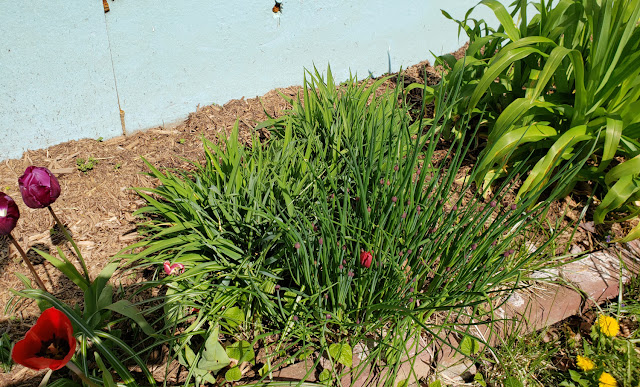 and phlox and hostas.  I love that the phlox blossom so early! 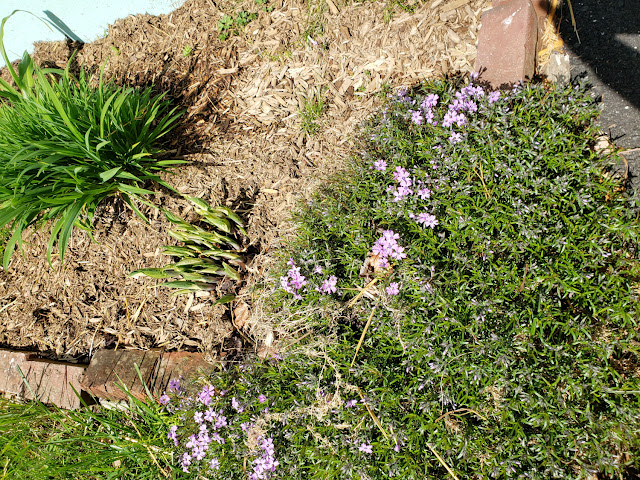 The other side of our small flower gardens have various plants beginning their annual adventures! 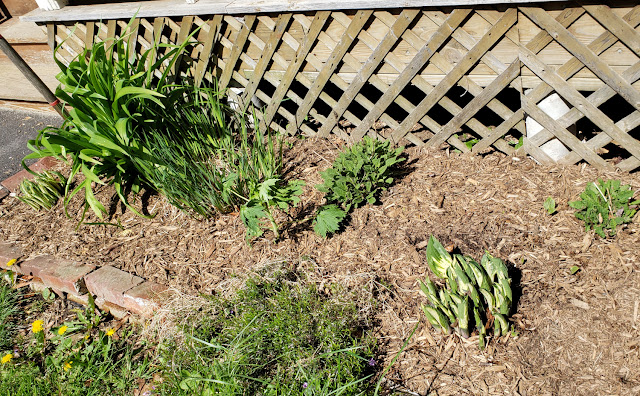 And our azaleas, near the well house, are still to come, with their amazing explosions of pinks! 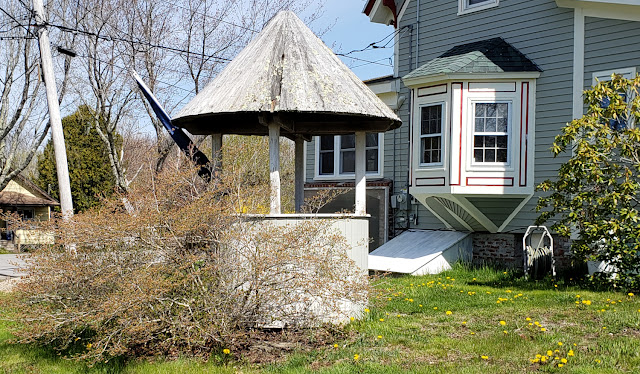 We also had an unusual visitor last week - an Eastern Oriole.  The image is terrible, taken through a screen with my phone, and doesn't nearly show the vivid orange he was displaying. 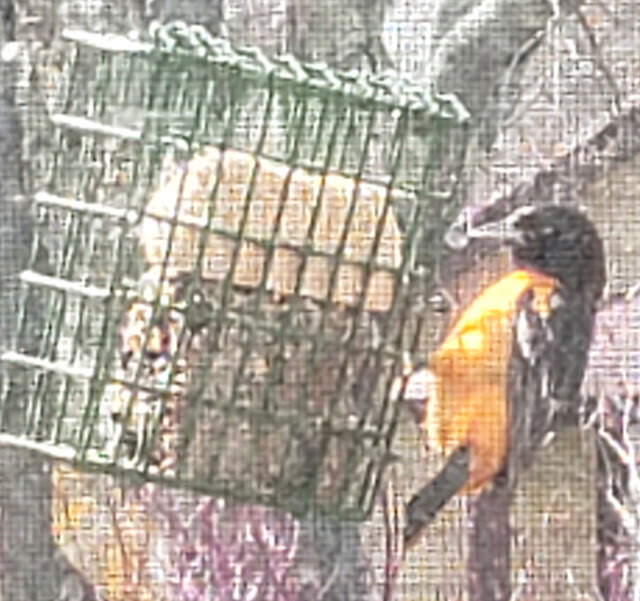 We've also had several hummingbirds, red-breasted grosbeaks, and phoebes, both new visitors for us.

So that is a (not) brief synopsis of what's been going on with me since I last posted.  Because of all of the various things I've had to deal with, my creativity cratered.  I did pick up some yarn for sock knitting after several months, and am now on my second pair.  It makes for a nice, easy start project to help blunt the news in the evenings.  I also sewed several masks, for family and friends.  Sewing is not my favorite activity, though it is a necessary part of finishing most woven objects.  I was glad that I had everything that I needed to sew up some masks, and then be done with it.

And finally, finally, I have begun the process of returning to my looms.  Initially, once I decided that I needed to try weaving again, I warped my small loom with some hand dyed peppermint yarn and wove two scarves in plain weave, just to dip my toe in the water.  I used tencel for the weft, and I think they turned out well.


This is the peppermint yarn I used for the warp.

And here are the two scarves.  The differences are a bit subtle, since one weft was a lovely mauve, and the other is a beautiful colorway called "Hummingbird." 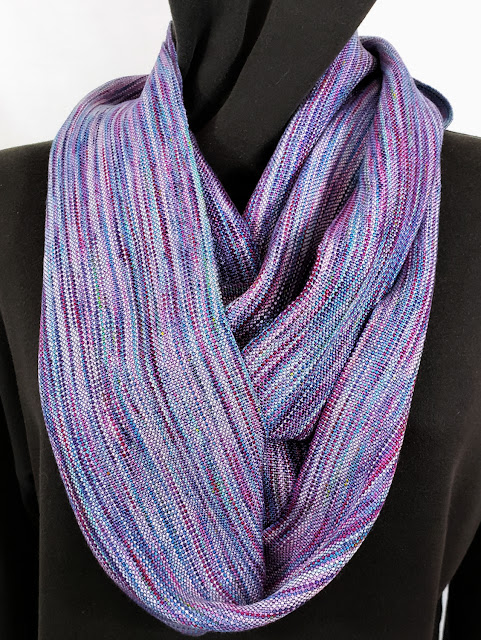 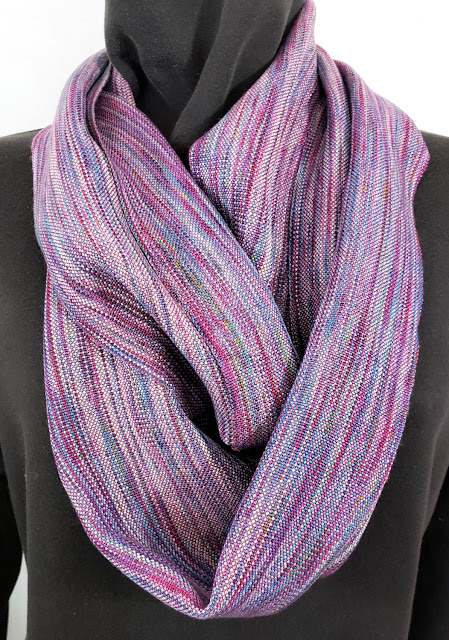 I've posted these in my my shop, but totally understand that money is tight and there is a lot of uncertainty out there.

I've since begun a new towel warp on the big loom, with the colors harkening to the title of this blog.  Shades of greens in a new structure for me, turned taquete.  I'm hoping for 8 towels when I'm done, and will try to update this when there is more to show.  For now, here are some of the colors. 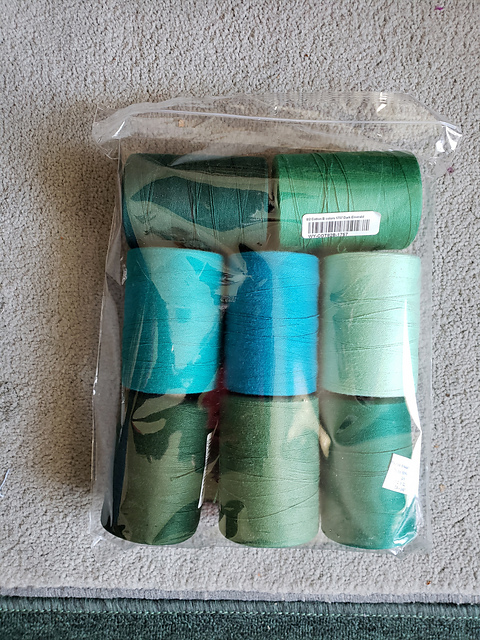 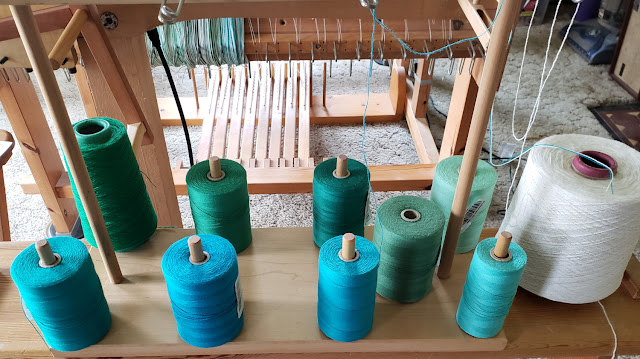 I'm hoping this blasted virus retreats soon, and that the scientists are successful in their mad dashes to come up with a vaccine.  Stay safe, stay healthy, try to stay home, and I'll see you next time.