Recently I loaded up my big countermarche loom with 11.5 yards of natural ring spun cotton for a run of pebble weave towels for the summer craft fair.  This pattern is an easy, mindless weave - just what I needed to get my weaving mojo back.

First up, I wove four towels in a lovely dark purple.  A couple of customers have repeatedly asked me to weave purple towels for them, so I obliged and have one for each of them plus two for the show.  (Don't ask me why the photo is sideways - I just changed it in my editing software!). 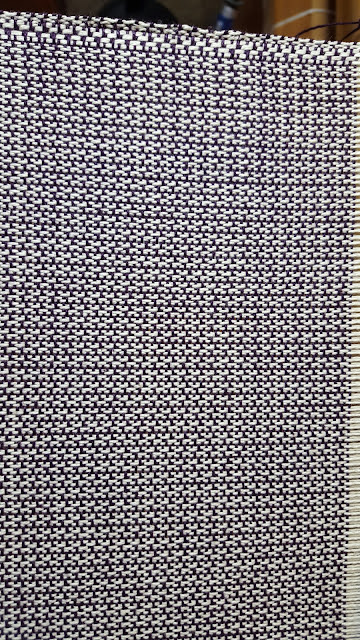 Next up, a gorgeous Caribbean aqua named "bleu moyen."  The perfect pick-me-up after our not-so awesome storms and frigid temps.  I wove three of these.  (I think this image is a bit over-exposed). 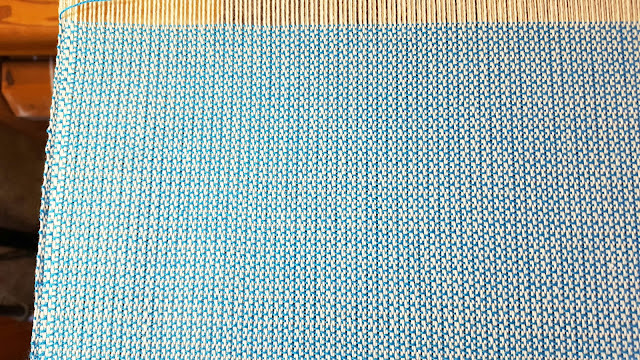 Today, I started and hope to finish the 8th towel, woven in a pretty medium blue.  No images yet, but soon!

Here are some of the colors I have available.  I actually have a lot more, but most are not suitable for towels, at least in my opinion.  I'm skipping red and burgundy this go-round, as those seem to be the least popular colors. 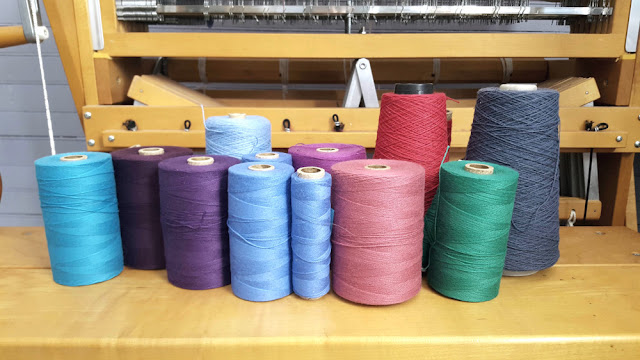 I wish I had a nice royal blue, but I don't, and I'd love to weave these from stash.

One of my next projects is going to be table runners using overshot in the pattern "Lee's Surrender."  This has been on my wish list forever, and I've been hesitant out of fear of the complexity of it, but I'm just gonna do it!!

In my "spare" time, I've started a second pair of Northman mittens, this time for my older son for his birthday.  He mentioned that "if I were of a mind" to make another pair, he'd love one because the other mittens that I knit him a long time ago were not very good at blocking the wind.  Well, he told me this less than two weeks before his birthday!  I ordered a skein of yarn, used the rest that I had set aside for a pair for myself, and started knitting them on the 19th, and just finished the body of the left mitten last night.  Hoping to get the thumb done tonight, so I can start on the right mitten when I get a break from work.  I have to say, it's really nice to be working with color again!  And yes, they will be late, but I don't think he'll mind.  There's plenty of winter left up here in Maine. 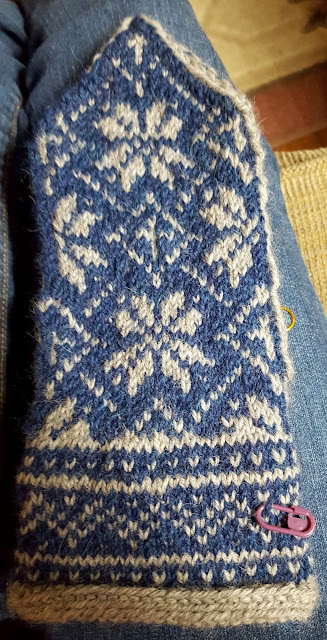 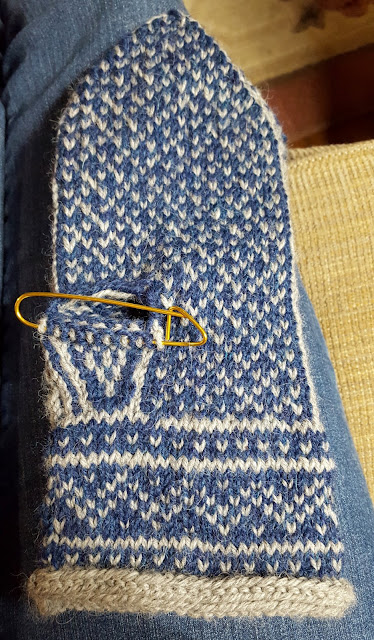 Like a lot of the country, we recently went through a deep freeze with a rather large snow storm thrown in for good measure.  Temps have been in the single digits for highs, and over the weekend, we got about a foot of snow.  It started nice and fluffy for 9-10 inches, then changed to sleet and maybe a bit of freezing rain.  Whatever it was, we couldn't move it once it stopped.  The snow was not quite ice on top, but pretty impenetrable.  This poor guy must have been pretty hungry to be out at the suet feeder at the height of the storm.  The birds were no where to be found. 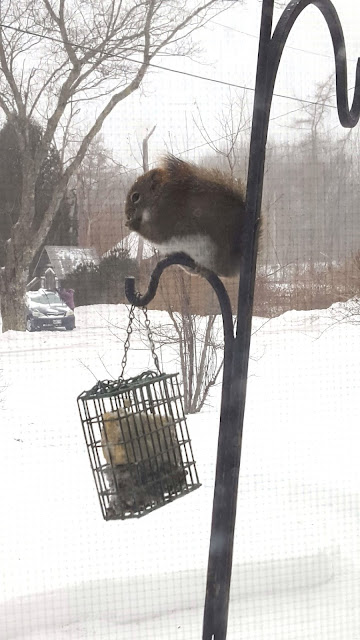 That night, it was eerily beautiful out, with the shadows from trees being cast from the nearby street light.  Hard to catch it accurately through the screens, but it was WAY too cold to venture out. 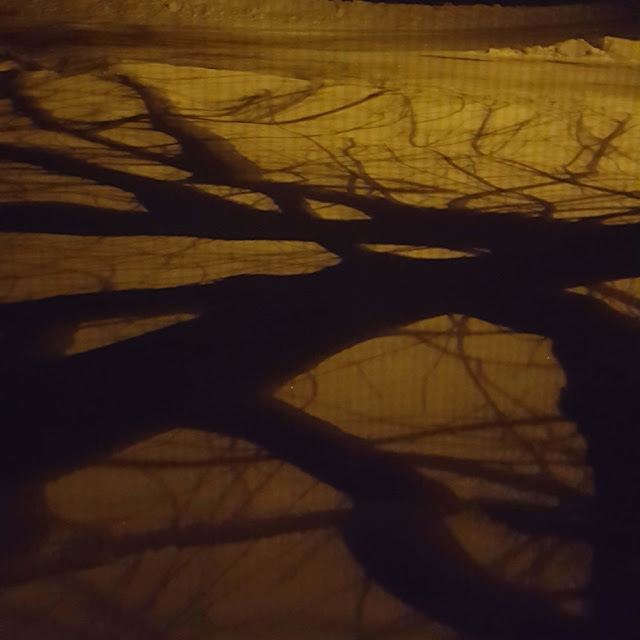 Yesterday was the first day that it reached the upper 20's, and with the accompanying sun, I felt like I could go out and try to shovel the path to the garage.  Hubby had taken the aluminum shovel, so I grabbed a small metal flat-edged shovel to try to break up the crust.  For the most part, it worked well but was just awful at actually shovelling the resultant chunks or the fluffy stuff underneath, so I used a plastic snow shovel for that. 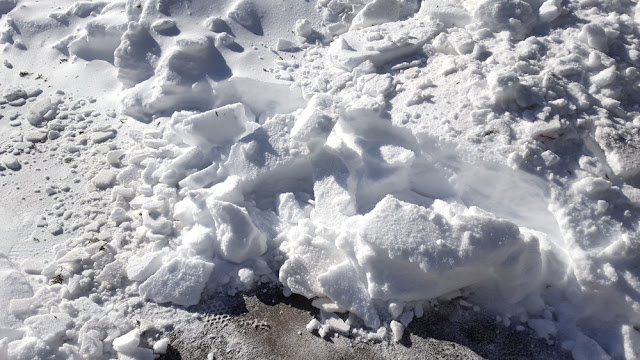 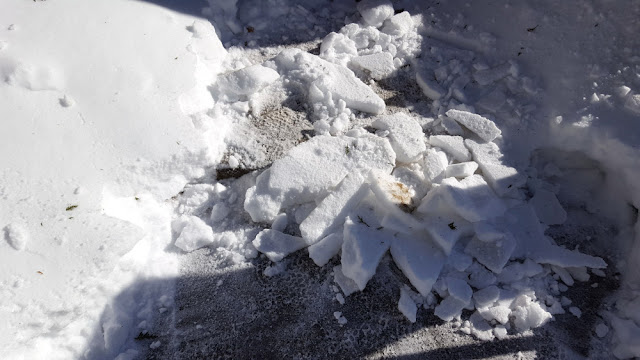 Today it is in the 40's and pouring rain, with wind gusts north of 30 mph, which makes it seem quite ominous.  A lot of the huge snowbanks are shrinking, but we will definitely still have snow left when the storm departs and, you guessed it, it becomes really cold again.  I just hope I don't slip and lose my footing on my way to the garage and across the parking lot at work tomorrow!