Remember many posts ago, I was working diligently on a project that I couldn't show because it was destined to be a surprise down the road?  It was completed last July, but had to wait until Thanksgiving to be gifted.  I can now (finally!) show the project that slowed my weaving to a crawl for a year and a half. 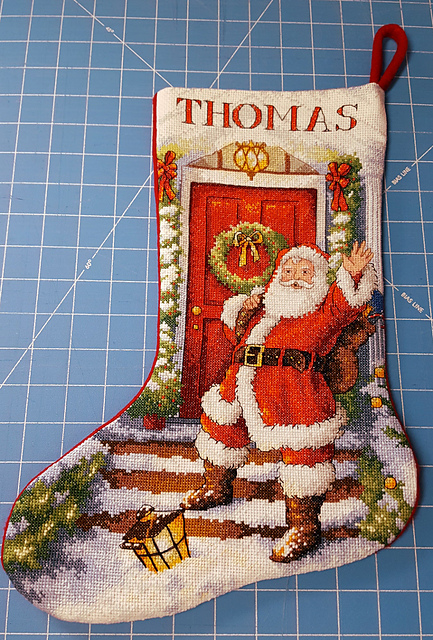 Made for the new grand-baby, this stocking took me so much longer than I thought it would.  It's counted cross-stitch, which I have done several times before.  After each project, I vowed "Never again!"

There is somewhat of a tradition in this family that I make Christmas stockings for everyone.  It started when I found out my then-boyfriend never had a stocking growing up.  I thought that was really sad, so I found a crewel-work kit and made one for him, which he loved.  I then HAD to make one for myself to replace my childhood felt one, so I found another kit and made that.  First child came along, so did another stocking.  This went on for some time until the children and other relatives stopped appearing.

Fast forward to my older son and his wife being together for several years, with vague talk about children starting to pepper the conversations, so I went looking for another crewel stocking kit.  All I could find were ones that used acrylic yarn rather than wool, and none of them had good ratings.  I finally settled on this cross-stitch one because I liked the design, and I knew I could do it.  Several reviewers said that made it in several months, 3-4, so I figured that was doable.  I worked on it every evening I was home, and it still took me just under a year and a half.

W found out they were expecting in July, and I got the stocking design all stitched before leaving for fiddle camp, but we still didn't know the name!  I had to wait until he was born to do that part, and then the, um, interesting part occurred - how do I put this all together so that it is lined and has no seams showing??  Several Youtubes later, I figured it out and crossed my fingers that it would work, and it did!  DIL's birthday is in early July, and the baby was born in June, so I was sure that I could get it ready as a birthday present.  Not.  So I tucked it away until the next obvious gift-giving time, Thanksgiving.  Not a traditional time to give gifts, but it is if one decorates for the holidays early.

The baby wasn't too impressed, but my son and DIL seemed appreciative.  Phew!

Here's a couple of photos, one of the felted back, and one showing the stocking after the lining was sewn in. 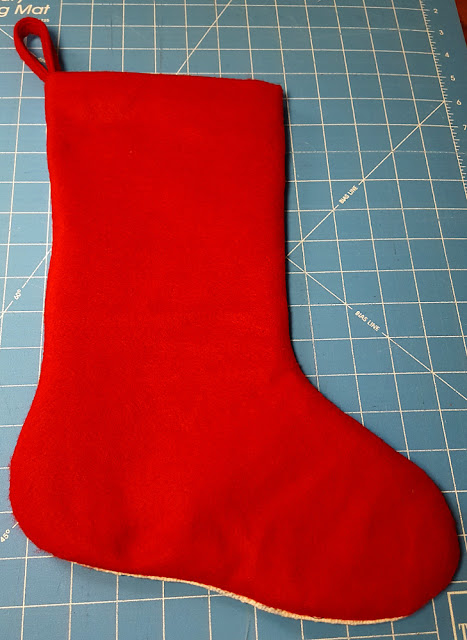 I hope that it will be appreciated and stuffed with goodies for years to come!