Knitting, Nights, and Taxes - A Week in the Life

This past week has been interesting, and definitely different than my norm.  For one, I swapped my week of day shifts for two 12 hour nights in a row.  It brought back both the good and bad about working at night - there are more laughs, fewer people coming and going, more junk food everywhere, great camaraderie, but there is also the dreaded FOG, that point later in the night when everything becomes a bit fuzzy, words don't come quite as easily, and you can feel the heavy weight of exhaustion hovering just around the corner.  That's when I just keep moving; if the work itself is not busy enough, I take myself for a walk in the main corridor, which wakes me up nicely.  There is also the aftermath, that feeling of not being able to get enough rest for a few days.  It has now passed, but it is a good reminder of why I left my beloved nights - my health.

I have been making some progress on the baby sweater since I last posted. 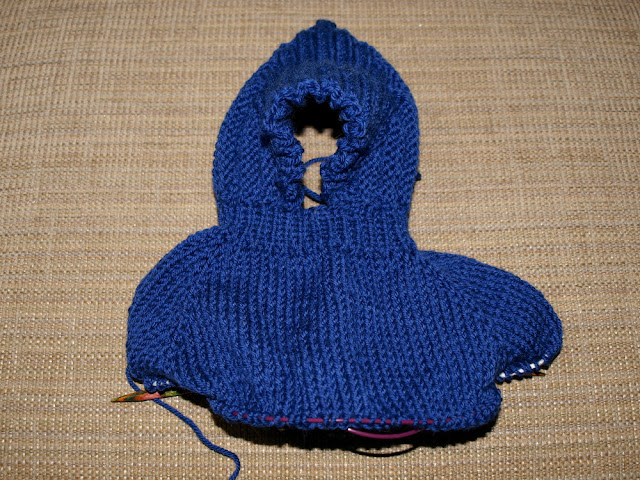 It took several rows after the ribbing beneath the hood for me to "get" where this pattern was going, but now it's crystal clear, of course.  I'm to knit to 5 inches below the arm holes, then knit ribbing for another inch.  Easy peasy.

The baby blankets are done and are awaiting their glamour shots.  For some reason, I'm having a hard time figuring out how to photograph them, hence the delay.  I'll get it done this week, now that I have finally completed our...

Taxes.  Blech.  I had to make a promise to myself, no weaving activity until the taxes are done.  I dreaded them partly because I knew we would owe a bit this year, but also because I just felt too weary to tackle them.  Once the fog of nights departed, that was project number one.  I completed them yesterday, so starting tomorrow, I will be restringing up texsolv for the tie ups on my Glimakra Standard loom.  There was a very interesting thread on Ravelry about a different tie up system that is neat because once the cords are on, they never come off, just the peg positions are changed.  After crawling inside my loom and sitting on the floor to do the tie ups, it felt wise to try this new way while I was still young enough to get under there to set it up.  I'll let you know how it all goes next time!

As for weather, the 50's that felt so great are gone, but at least for now, there is no snow on the ground, which makes going for walks so much easier.  We felt the wind of that powerful Nor'easter Friday and yesterday, but lost no power or trees, unlike further south.  There is to be another one on Wednesday, this time accompanied by snow, so yippee.