What I Did on my "Summer" Vacation

As I sit here, the rain is falling and the temps are, well, nothing to speak of.  We here in Maine pride ourselves on turning the heat off fairly early in the spring, more as a matter of pride (and oil savings) than in response to the warming of the earth.  This year, I have to admit, I waiting longer than usual, as the temps were just too cold and the atmosphere too wet.

Well, today is one of those days when I really, REALLY want to turn it back on.  The outside temperature is around 50 degrees, and it has been raining on and off since last night.  I felt comfortable weaving, but as soon as I stopped, my fingers and feet became instantly cold.  It doesn't help that I eat a delicious but quite cold lunch every day as well. So, I've been bundled up, my finger itching to flip the switch, just this once...until hubby kindly started a fire in the woodstove.  It hasn't heated anything up as yet, but soon I'm sure I'll be peeling off layers and wondering why it's so darn hot in here! 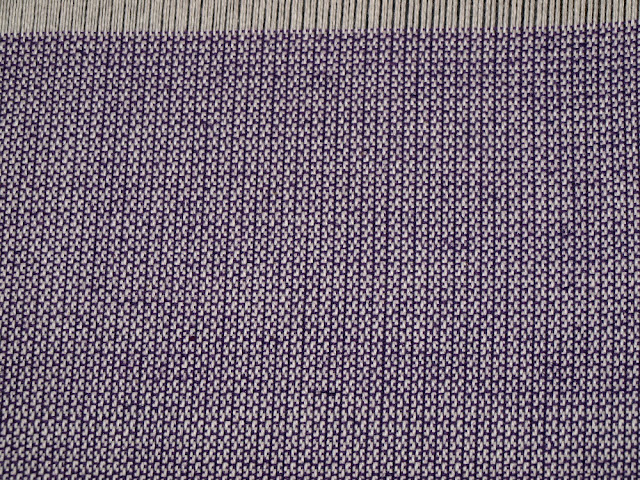 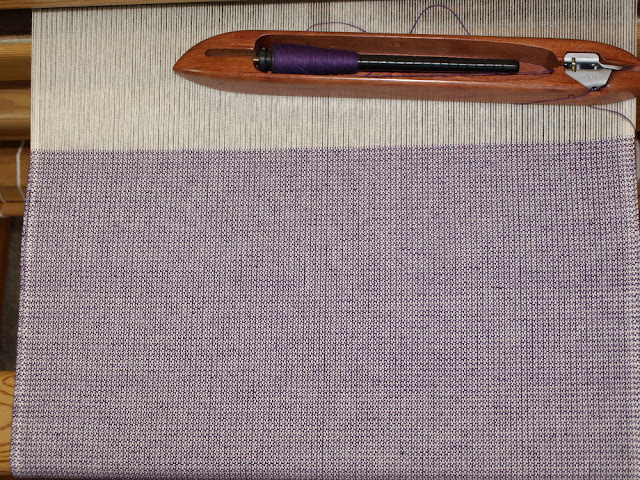 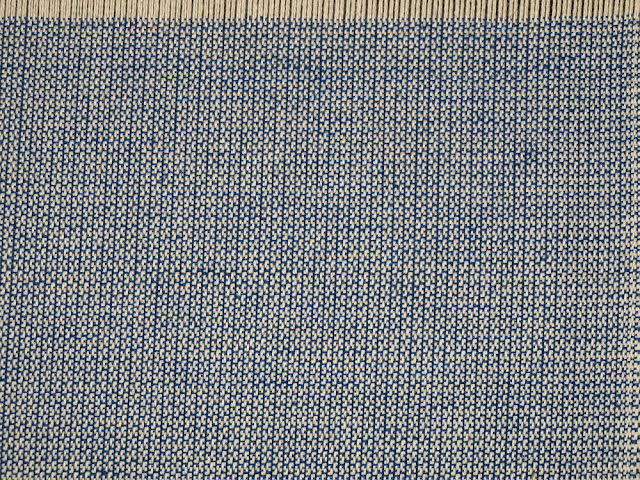 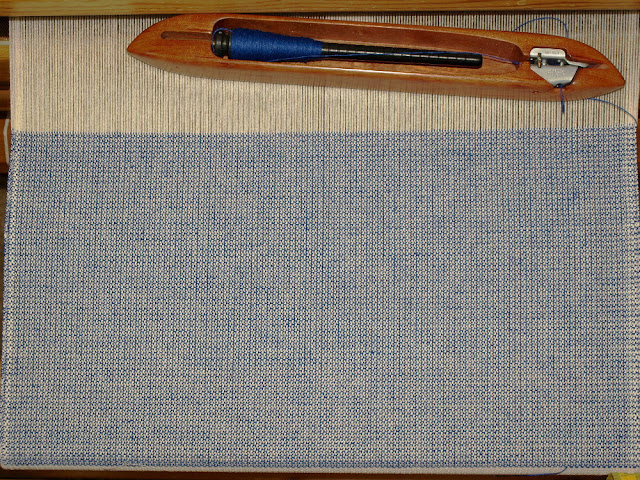 I just love the little textural nubs from the linen! 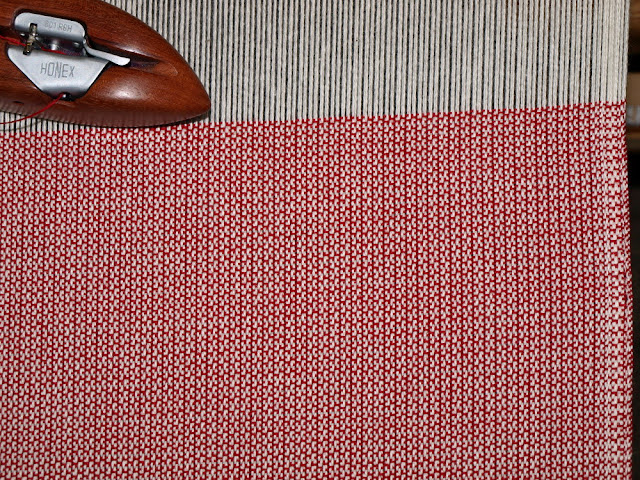 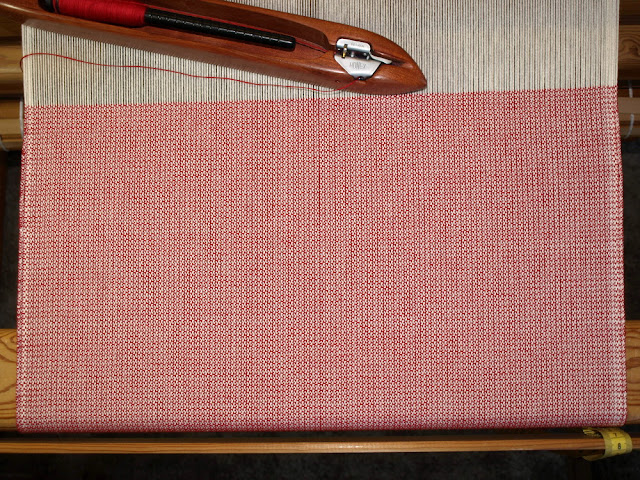 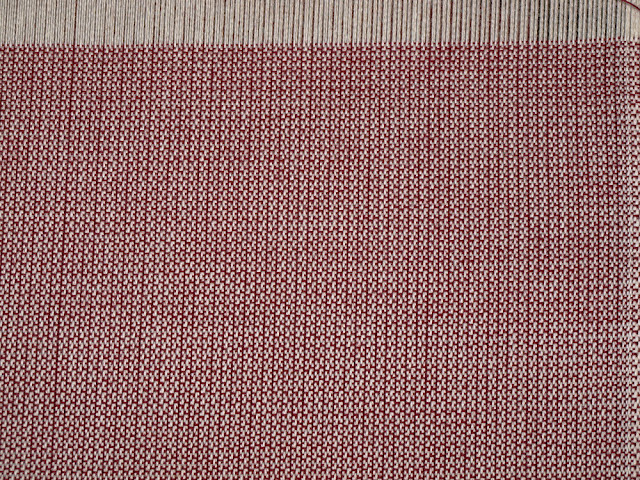 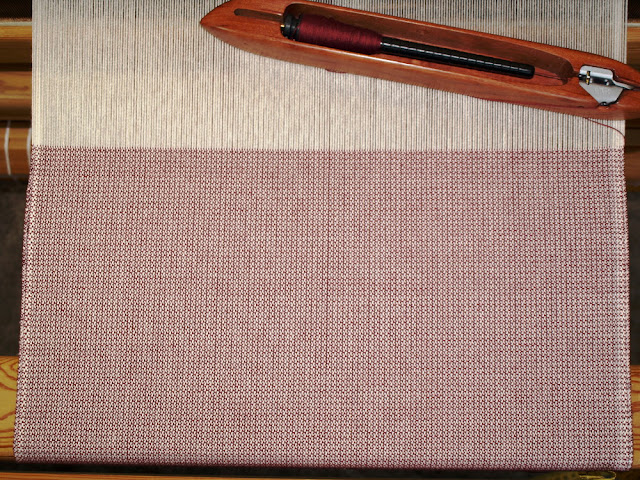 I seem to be left with enough warp for one, and perhaps two more towels.  I didn't seem to have any appropriate shade of green in the Maurice Brassard 8/2, so I'm going to use a medium green from an unknown source.

I've also finished the tablet-woven band I had started awhile ago.  No photos yet as the band is still drying, but there will be two more "Nasty Woman" fobs, and 2 "resist" fobs.  I think I will also drop the price a bit, which unfortunately doesn't reflect all the work that goes into these.

During this vacation I've been able to take walks most days, which has brought me much pleasure.  Besides having a calming, head-clearing influence, the walks also do wonders for my back, de-kinking it after ~20 minutes.

My other project, one over which I have toiled most consistently during this break, is the house painting job.  I have spent many hours, on every dry day, up, up, up in the clouds, applying multiple colors of paint.  I was so sure that I would have it done by now, but when I took photos yesterday, I came away vaguely disappointed.  Visually, the change isn't as apparent as I thought it would be.

After reaching all that I could reach on the two outside ladders, I decided to woman-up and go up the highest one that reaches the peak.  The trip up was precarious to me, but I just kept looking upwards, and once I reached to top, the ladder proved to be quite stable. The bruises on my knees can attest to how many trips up and down ladders I took - how do people avoid that??  I ended up turning sideways as I would ascend or descend, but that didn't feel very safe either.

So, this is the photo from last time, before I braved the highest peak; 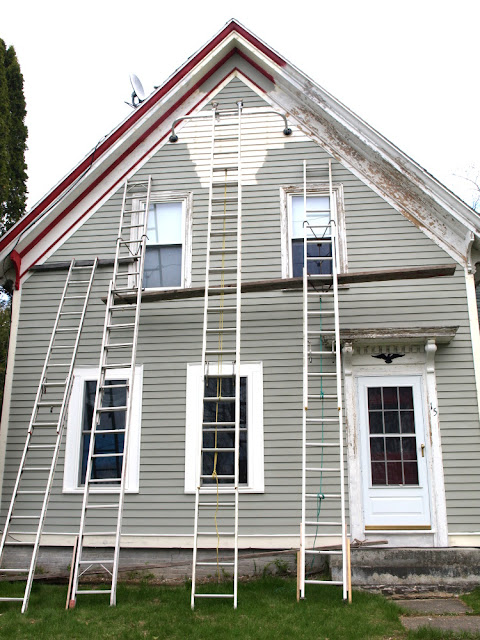 And this is where the project stands right now; 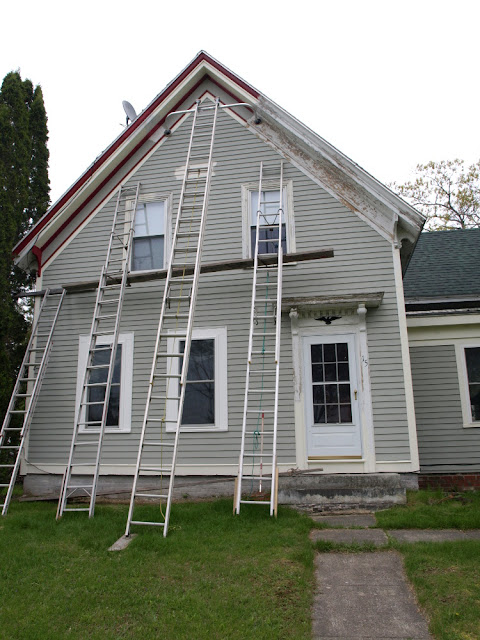 Not much different, right?  The left-hand eaves got two coats of paint except for that one area under the ladder brace's foot.  You can really see the difference in the red tone - the first coat looked quite orange-red.  I also managed to paint all but three small areas of clapboards, but just could not reach them any way I tried.  I asked hubby to lower the center ladder a bit, just so I could finish the clapboards and paint that unpainted area on the left eaves, but haven't been able to convince him yet.  I think that is the most discouraging part, not being able to do something for want of the help of others. Obviously the eaves on the right still need painting, but they need scraping first, which I do not do as thoroughly as hubby. Who knows, I may have to just dig in and do my best there too.

Knowing that it would be raining all day today, I was desperate to paint something yesterday, so I hauled out a step ladder and a very small brush, and painted the small bullseye's over the family room door to the right in the photo (if you can make it out). 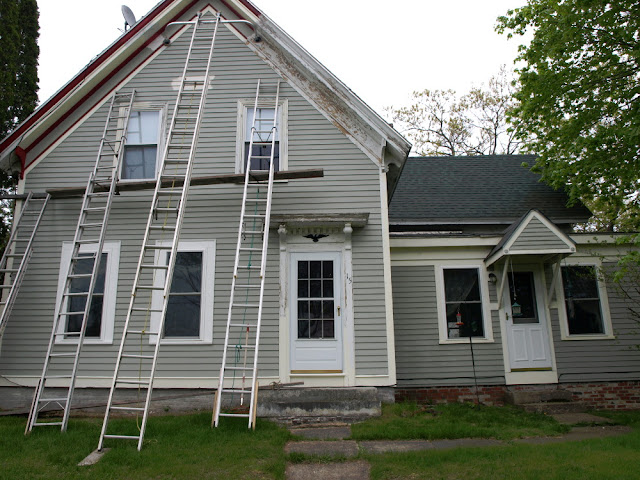 My younger son is coming up for the weekend, and our community band is playing tomorrow at a Memorial Day program at Montpelier, also known as the Henry Knox mansion.  I may have some time to paint or weave on Sunday, but most likely not, then it's back to work for me on Monday.  Sigh.

Here's wishing everyone a most happy weekend!

PS  I'm looking for color ideas for broken twill baby blankets.  I need 3-4 colors that will go together and not scream "boy" or "girl."  I also have plans for some woven in natural where the weave structure will "do the talking," but I'm having a brain cramp about colors.  I've already had a couple of suggestions in my FB group, but would love to hear from some of you!