The weaving on the Paradise Cove warp came to a screeching halt last Monday when I finished weaving the first wrap with the black tencel weft. 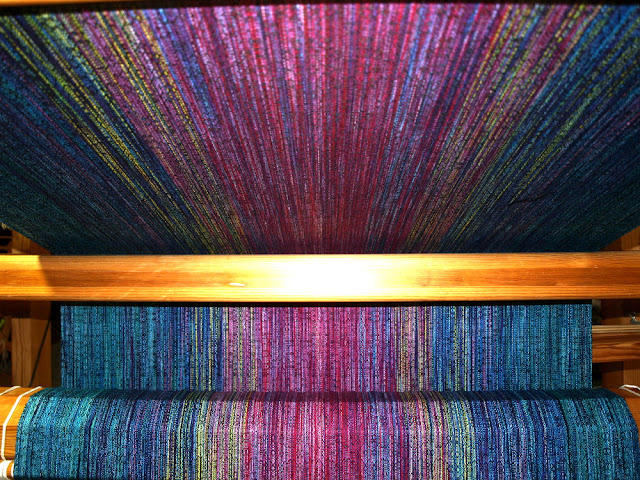 The next semi-custom slot holder wants hand dyed peppermint yarn for her weft, which arrived in the mail last week.  The decision was made to have the yarn speckle dyed, so I planned to do as much as I could on Wednesday, knowing  would be away the next day for a nursing conference, and then have to work today and tomorrow.

Being the way I am, I ended up completing the process all in one day, which is a lot.  I set up the table in my garage, adding plastic and bringing out the dye powders that I would use.  Mind you, the night before the temps had dropped into the 30's, and the garage is unheated, so it was very chilly out there.

The skeins had been already wound, so I put them in hot soapy water (I used Synthrapol) for about 30 minutes, then rinsed and soaked them in a soda ash solution for another 30 or so.  Then one by one I set them on the table and began to sprinkle dye on randomly.  When one side was done, I flipped them over and did the other side, then wrapped them in plastic wrap.  I did a non-traditional speckle dye, in that I decided to try to cover most of the yarn instead of leaving a lot of the natural showing. The yarn has a slight grayish tone, and the slot holder had wanted color, so I left little undyed. 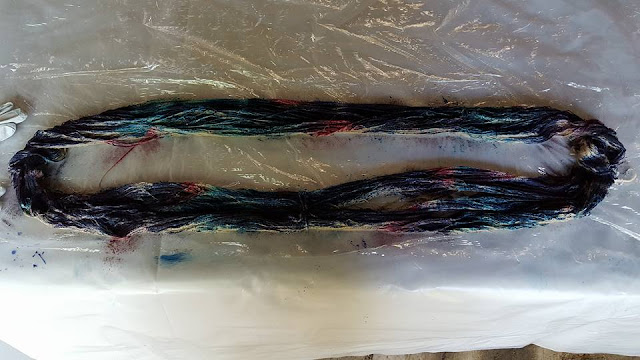 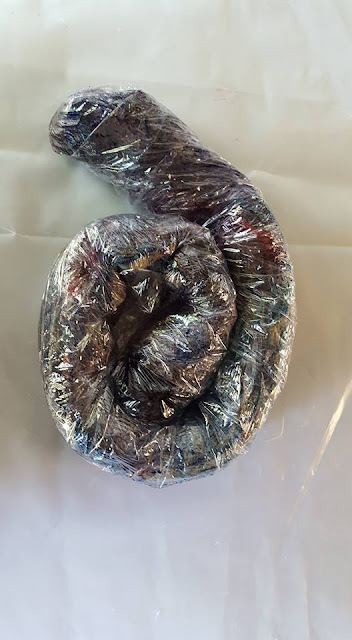 When all 4 skeins (and one mini skein) were done, I placed them all in a couple of foil roasting pans, then set them in my oven. 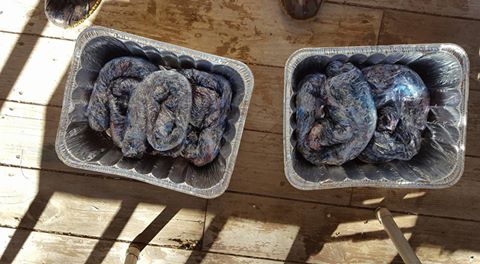 I turned the oven onto warm, but only for a few minutes, then left the yarn in there for a couple of hours.  That afternoon, I soaked the skeins in cold water for an hour, then a hot Synthrapol solution for another hour, then rinsed, rinsed, and rinsed.  Finally, I put them in a hot soak with Milsoft, to help the yarns be more soft and easier to manage once they dried.  By the time that was done, it was 3 PM and too late to put them outside to dry, so I set up my old laundry rack upstairs and laid the yarns out on that.

This morning, a day and a half later, I found the yarns still slightly damp, much to my surprise.  So they are now on the line outside, and I hope they dry before I have to leave for work this afternoon, or they will one again have to come inside.  The days are expected to be relatively warm, but nights are quite cold and dewy, so leaving them out won't help matters. 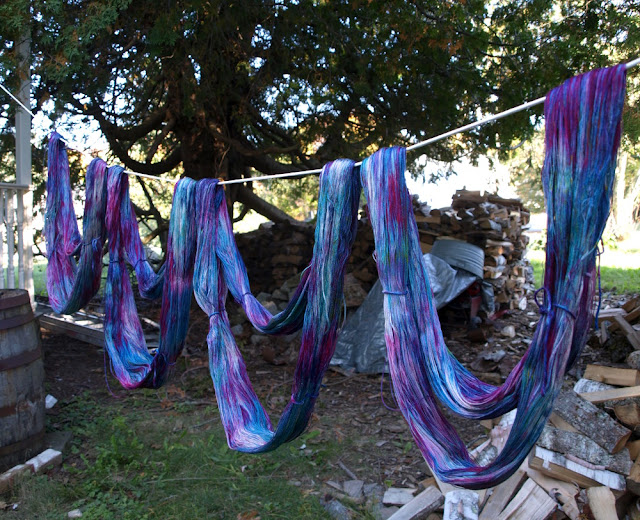 I can't wait to start weaving with this yarn and see how the patterns and colors change!