The Highs and Lows

I've been MIA for a bit because of several factors.  First and foremost, I wanted to complete the weaving portion of the Paradise Cove warp.  At last post, I was ready to start the Zephyr wool/silk weft, and I found that to be a wonderful yarn to work with.  The patterning became apparent again, but in a much subtler way than with the black tencel.  I had almost memorized the 146 pick pattern, so was happily weaving along, and then... 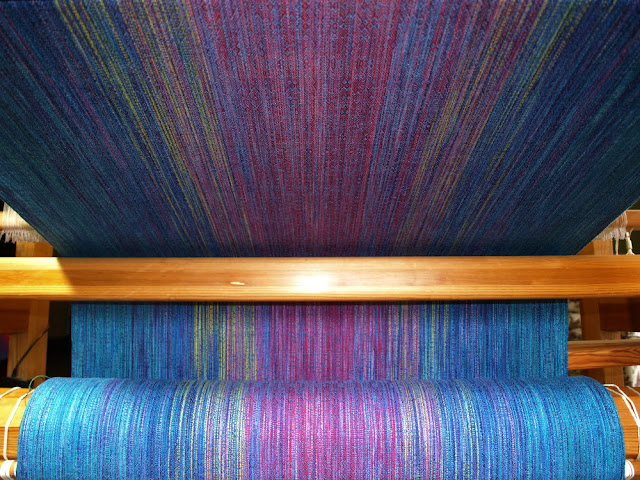 It became apparent that there would not be enough warp left to weave the size baby wrap that the customer wanted.  I felt horrible, having let her down.  I wove until the bitter end, but only ended up with 118.5 inches STIH off the loom, pre-wash.

I set that aside, because I had planned on finishing the wraps in the order in which they were woven, so I took the first piece, woven with tencel, and found 25 inches of multiple long floats that covered the entire width of the cloth at the end of her piece.  These floats were underneath and so, impossible to see while weaving. One or more of the texsolv treadle cords had become loose while weaving.  I let the customer know, and have since spent every available day hunched over the kitchen table, which magnifying head gear on, needle weaving in every single thread for the full length, plus overlap.  As of today, I'm about half way done.  I do believe that the repairs will work and be virtually invisible, but the disappointment in myself and my ability to do this work to the standards I have set for myself are in my thoughts constantly.  I haven't dared to look at the second piece yet to see if these floats are present there as well.  Here is a cell phone shot to show the floats - for some reason, I couldn't get my good camera to take adequate photos of this. 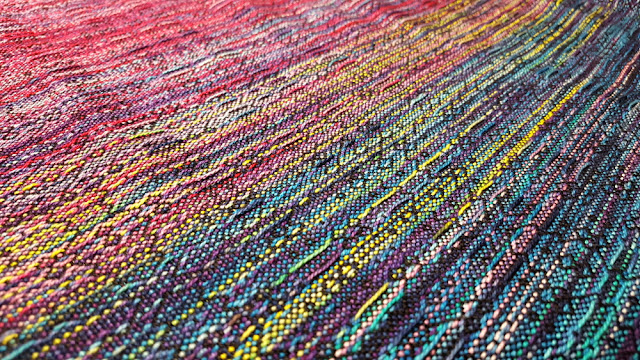 So, after the elation of my first big dye job, and the joy at seeing the complexity of the draft play out, I am now faced with the possibility that I may not continue down this road.  I will complete these wraps, offering the third, shorter piece for anyone who may want it, or convert it myself into a sling, then take a bit of a break until I can figure out where I want to go from here.  I know the weaving bug will strike, probably sooner than later, but at this point, I feel like I have poured almost every free moment into this part of my life, to the detriment of almost everything else, and maybe that's not the smartest move, either.

On a another note entirely, while weaving I usually will listen to music, often through Pandora, just to give my mind something else to think about besides saying the treadling pattern over and over in my head.  For this warp, because it was fairly complex, I didn't listen to anything.  At all.  And I missed it.  So once I knew that there would be a chunk of time spent repairing, I happily turned the music back on, lightening the mood a bit and passing the time in a more positive way.  Then I remembered that I had started to listen to podcasts for the first time a few months ago.  One of the ones I found entertaining is The West Wing Weekly, which reviews each episode of the The West Wing.  It sounds fairly boring, but it is a great mixture of insight, comedy, and civics.  They often have guests on, some of whom were actors on the series, but others from government and other related areas.  Back when the series was on, my older son was in a youth orchestra in Portland, which is an hour and a half commute. We went weekly, on Wednesdays, and were delighted to find that occasionally, on the ride home, we could pick up the audio from the television broadcast on AM radio.  We both really enjoyed the witty repartee and were always disappointed when we couldn't tune in.  It was a great bonding experience.  Now that we are in the age of Netflix, he and his wife have binge-watched it, and my husband and I spent much of the summer's dearth of watchable shows rewatching the series. If any of you enjoyed the West Wing, I would highly recommend this podcast.  It has made me smile and laugh a bit through this less-than-stellar episode of my weaving career.