I've nothing impressive to show for it.  Well, not online, anyway.  The hand dyed warp is being wound onto the back beam, and as of this moment, 9 of 16 sections are done and nicely even.  I haven't taken any pictures of the process, though why, I'm not sure.  Perhaps too busy working, both on this warp and at my nursing job - lots and lots of babies have decided that September is a great month in which to make an appearance!

Our weather, which has been so hot and humid all summer, is showing glimmers of change.  Today is blessedly cool and comfortable, starting the day in the mid 40's, now hovering in the upper 60's with a nice breeze.  I made a point to get outside, just for a short walk, because this is the weather that I long for throughout the year.  The air seems clearer, the colors more vibrant...I just love it.   Unfortunately, my walk was quite short, as my legs are feeling a bit rubbery today.  I worked non-stop 12 hours day shifts on Friday and Saturday, then a non-stop 12 hour night shift last night (Sunday), and, as seems to be my usual, I have not yet gone to bed.  Ten o'clock tonight will suffice, but my legs are quite tired.  Winding the warp requires 90% standing, then 10% crouching, and that after so many hours of standing and fast walking at work have done the old gams in, at least for today!  I don't have to return to work until Thursday, and hope that the yarn will be on the sectional beam by then. Pictures, I promise.

I did post a draw for semi-custom slots on this warp, with the winners able to choose the length of their wrap and the weft they would like.  One customer, the one who submitted the photo chosen as inspiration for this warp, has decided she would like a 4.2 meter piece with tencel weft.  For now, the rest of the warp is open.  Perhaps some shots of in-progress weaving will inspire someone else??

Here's the collage that I used for the draw: 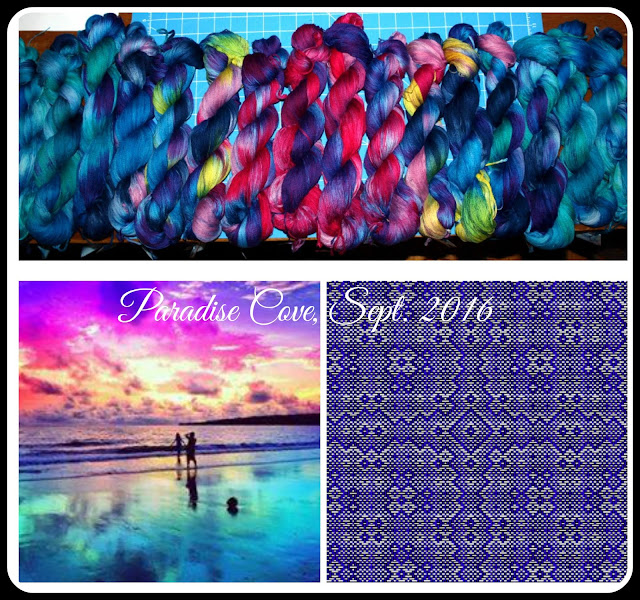 The renovations to the west wall are (mostly) completed.  The contractor's work is done, but we are still completing some finishing work ourselves.  There was an issue with incorrect caulking being used on the clapboards, such that the paint won't adhere despite attempts at scraping the offending silicone off by the contractor.  He returned again and replaced some of the clapboards, but there may be some issues higher up.  My hubby is spending some time scraping the old trim and trying to get the exterior ready to paint.  The living room is painted, and as much as I think I like that sort of thing, after 4 days of it, I.was.done.  All that is left is to rehang some paintings/photos, but the warping process has taken precedence.  Again, next time!