Now that the date for submitting photos to the weavers' competition is here, and mine are all done (!), all that's left is the voting.  And the waiting.  And worrying.  Right now I'm still sketchy on the procedure after being eliminated and placed in the consolation round, but I'll think about that another day.

Since my last post, I have finished winding the warps for my turned twill towels, and boy, was I right when I predicted tangles!  With each successive bout I tried different things to improve my chances of carefree warping. I tightened the tension on the Square as I pulled the yarn off, which seemed to help a bit.  I also warped fewer sections, which helped tremendously - I wish I had thought of that sooner.

As I began warping, which I do back-to-front, I had the yarn tangling at the lease sticks almost right away.  Now, I know that you're only supposed to strum yarn and never comb it, but I had to do something.  Because I had read of many baby wrap weavers using a Tangle Teezer to help them with their issues, I thought I would use a hairbrush with similar, plastic bristles.  It did seem to help for a time, but all it was really doing was building up the tangles further down the chains, until I was left with 12 yards of this; 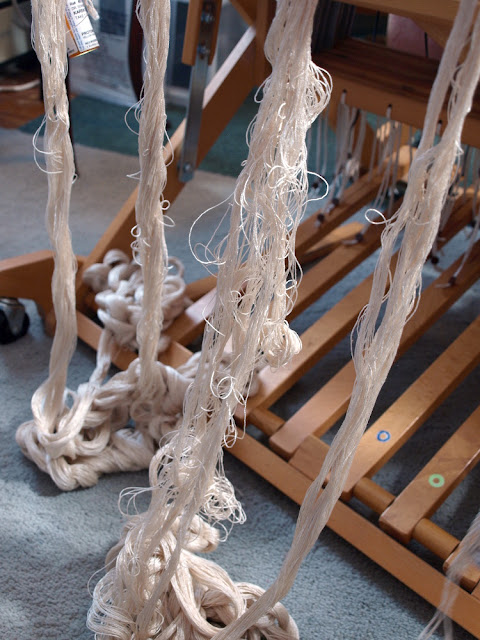 At this point, the only way of moving forward was to take each 28 end section one at a time, separate the yarn at the lease sticks, then clear the tangles for a yarn or so with my fingers.  I then temporarily tied a slip knot, until a few sections had been cleared, at which point I tied them together with another slip knot and placed S hooks and weighted med canisters.  I would then wind the yarn on, only a few inches at a time, until I could no longer get the yarn to move over the sticks.  I would then stop and clear everything all over again. I have to say, as great as 10/2 merc cotton is, it is super twisty!  I even gave myself some "yarn burns" while running the yarn over my fingers - ouch!

Here is the warp after I'd finger combed and weighted it, ready to be wound on. 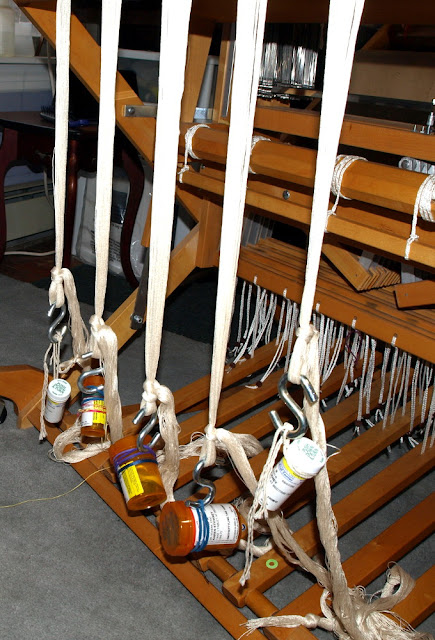 And after it was wound on; 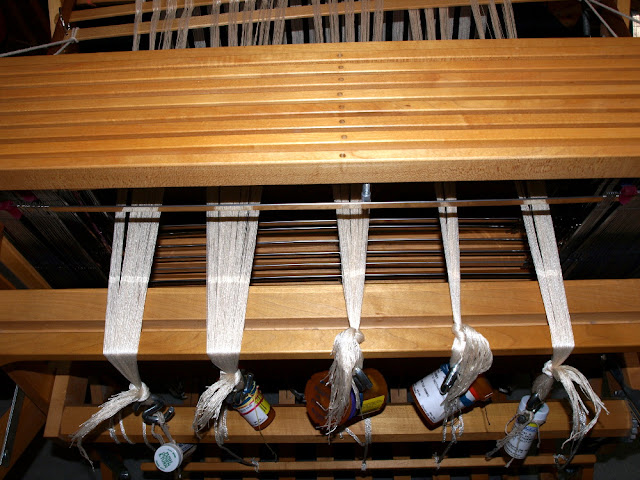 I guess you could say that this is my version of Laura Fry's warping trapeze!.

I found that manipulating the yarn this way, would allow me to wind the warp half a yard at a time, and it would only take me 30-45 minutes!  Talk about tedious.  But there was no way around this mess, so I've been plucking away at it, and today I finally have it on and ready to thread!

The next post will surely have pics of the competiton wrap, but hopefully also some towels.  I've been spending a bit more time doing work-related things that I'd like, but such is life, so weaving will have to be fit in here and there.

On another note, Hubby literally just took possession of this used Kubota tractor.  He's always talked of wanting some kind of tractor, which seemed ridiculous, seeing that we don't own a lot of land or work it much. It just seemed like a "guy" thing; he'd see one, even a huge one, on the side of the road, and say "Ooh, a tractor!!  I need one of those!"  It got to be a bit of a joke.  Well, joke no more.

Pardon the bad angle, but here he is, inspecting his new toy!  By the way, the blue barrels belong to our neighbor who's in the bait business.  We've tried growing shrubs to hide them, but so far haven't had a lot of luck - it's pretty shady there.

We may be getting a new fridge soon, as our 23 year old Kitchenaid is getting very loud and running a lot.  After looking around, I really like the looks of the French door models with the freezers on the bottom, but we have limited space in out tiny kitchen, so I'm not sure what we'll end up with.  I'm sure it won't be as colorful as the tractor, though!