I'm starting to measure warp for a set of baby wraps, using 10/2 mercerized cotton and my trusty Square Mini. The sett is quite dense, at least for me - 30 EPI - so I need 60 ends for each of my 2 inch sectional sections (that seems a bit redundant, doesn't it??).

I'm having a terrible time getting the yarn off of the Mini without having to release some threads manually, and as I wind on some ends are tangling, a sure sign of tension issues.  The length of the warp is 16.5 yards, which is a record for me, but nowhere near what the Mini can handle.

In order to wind the correct length, the Mini has to rotate 8 times for each end.  I'm making sure that the newly wound yarn is landing on the wooden arms of the Mini, and not on previously measured yarn, yet when I try to wind it off, the ends are "stuck," and seem to be buried under other yarns. 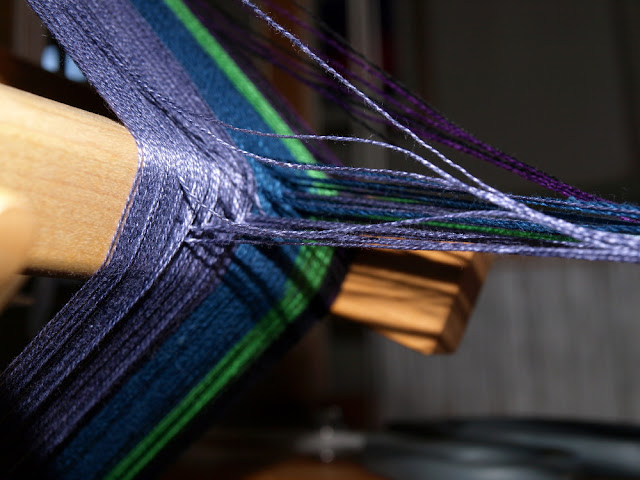 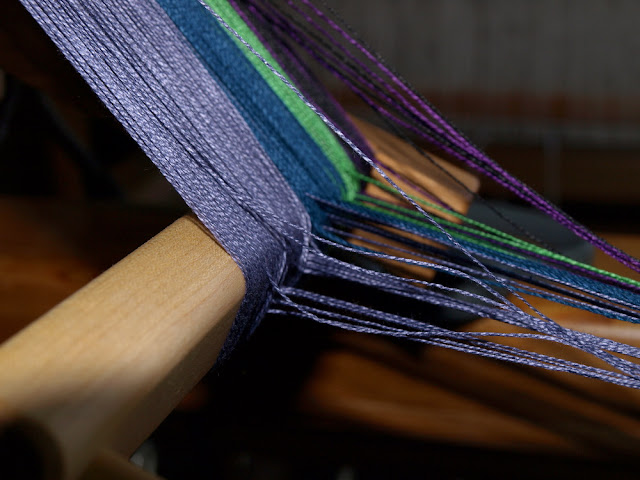 This happens before I can even place the little reed into the arm that is attached to the beam, so while holding that with one hand, the other has to loosen these ends one by one.  The tangling happens only during the first quarter or so of the measured warp, but by the time I reach the end, there are all kinds of tangles.

Now that I've started it, I have to finish the warp this way, since I don't have a board large enough to measure 16.5 yards.  I think that the weaving, which is usually so enjoyable, is going to be a nightmare.

Here is a shot of the first couple of colors as they were wound on the Mini, before I knew what lay ahead. 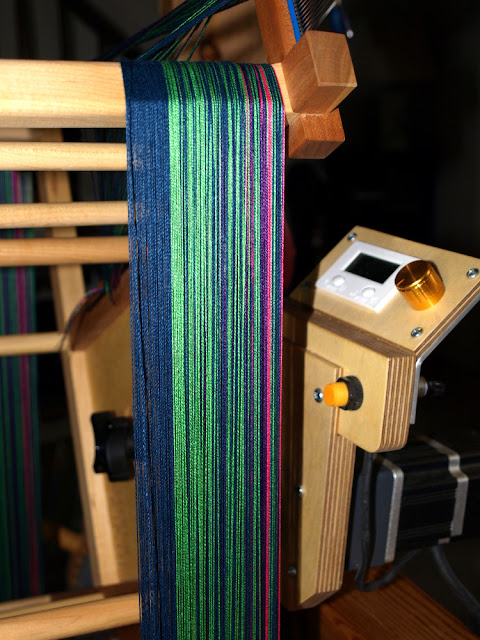 I'm at a stopping point right now, since I'm about to run out of the blue, and have some more on the way. Six sections wound, ten to go - who knows how this will all turn out??  I thought I did, but now I'm not so sure!

We are having a bit of a break this fall in the weather department.  This week our highs will be in the 50's, maybe low 60's, all the way until Sunday.  Last year, much of Maine got its first snowfall the first week in November, and in some places it was a foot deep!  Little did we know that it was only the beginning of what would be a banner year for snow and cold.  Hopefully, this mini warm spell portends something a bit more pleasurable!