I made it back from the craft fair in one piece, and that's saying something.  I don't know why, but the thought of interacting with the public is very difficult for me, both because I'm quite shy, and because part of me feels like I (and by association, my wares) won't measure up.  There were a lot of nerves working up to the date, but by the time it rolled around, there was so much to do that I forgot to be nervous, at least at first.

We got up at 4 AM, and arrived in Portland at 6:50 or so.  The directions were a bit nebulous, so we took a few extra minutes to find the street.  Both ends were blocked by police, who would wave you in if you were part of the show.  After that, there was a bit of mayhem, with folks driving their vehicles in to off-load, and tents already set up on the sides of the street.  These are old time New England streets, so not very wide.  There just wasn't room, so lots of stopping and squeezing by before we could get all of our stuff off of the truck.

I've never been very good at setting up a display for shows, and this year was still a work in progress, although I think it was an improvement over other years.  Here are three shots showing the three sides of the display. 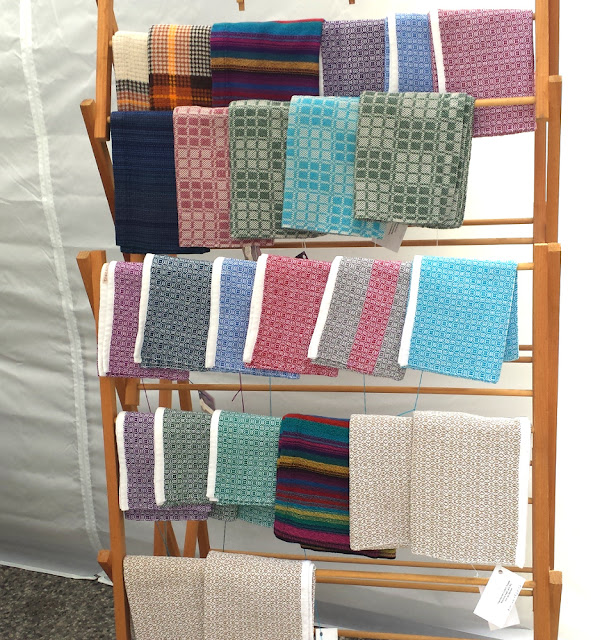 I've used this rack for scarves before, but it definitely worked better with towels. 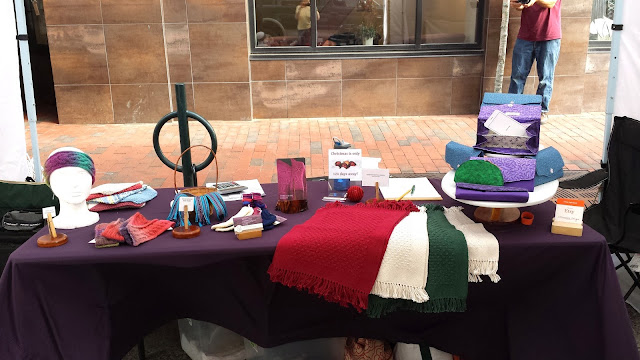 The table set up towards the back of the tent.  We had a rather nice backdrop behind us. 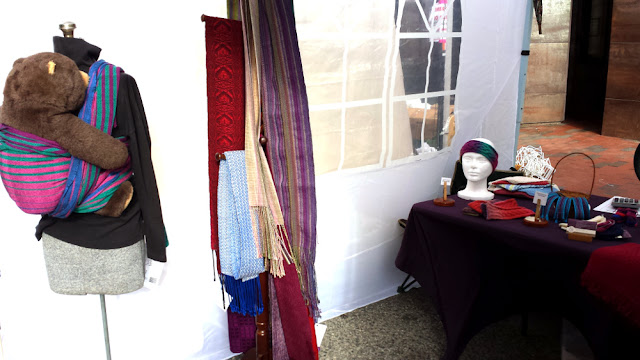 This side was the weakest display, I think.  Originally, I was going to use the dress form for my tencel shawl, but then I thought the wrapped teddy would be an eye catcher, which it was.  That left the shawl to be folded and draped over pegs with the other scarves, which did not work.  We eventually moved the shawl to hang from one of the tent supports in the middle, and later moved a few of the scarves to the support on the side of the tent.  A bit better, but scarf display still needs improving.  And yes, we got a few smiles from adults, and a few "can I touch him?"'s from little ones towards Ted.

From 9 AM to 2:30 PM, I had only managed to sell 4 items, barely making back the cost of the show. Standing up to greet people isn't too hard, but selling is.  I dislike being pounced upon, so I tend to not engage potential customers much, but after awhile I felt comfortable enough to ask if there were any questions I could answer for them, which helped.  In the last hour or so, two customers came and purchased several towels, the shawl, and a scarf! Plus, the weather held all day and we didn't get the predicted rain!!

We were both exhausted when we packed up to leave, and I was unfortunately dealing with some gluten contamination issues, so we were very happy to stop off at our son's place just 25 minutes up the road to get a bite to eat and visit for a bit.

At that point I was thinking that I would not be doing another fair, but now I may consider signing up for this one next year.  I'd like to get a better handle on what sorts of things people might like, but I'm not sure how to go about it.  Any advice from more experienced vendors out there??