I'm still plugging away at the tea towel warp that I put on the big loom awhile back.  Much has happened with it since I last posted, and not all of it was good.

The first issue was that the warp was NOT 8/2 mercerized cotton, as the label stated.  I had noticed that it seemed finer than that, but I tend to believe what I read, so when I tried to weave using 8/2 weft, the pattern wasn't even visible.  This meant that I had to cut and resley the warp at 27 EPI, so the towels are going to be quite narrow, truly fingertip towels.  I settled on using 10/2 merc cotton (what else??), and being careful to beat semi-gingerly.

After that was settled, the first towel I wove was with a red weft, called Lipstick, and it was a joy to weave; 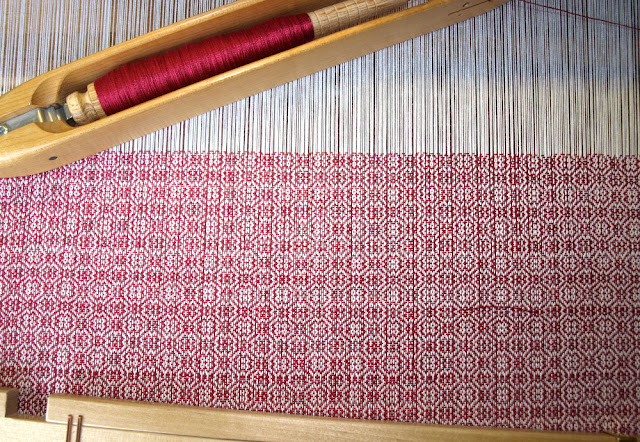 The second was a different shade of red, a bit brighter, and it also wove easily, until I came to the hem at the end of the towel.  I was using 20/2 bleached cotton for the hems, and I had had no problems with the previous three hems, but then this happened: 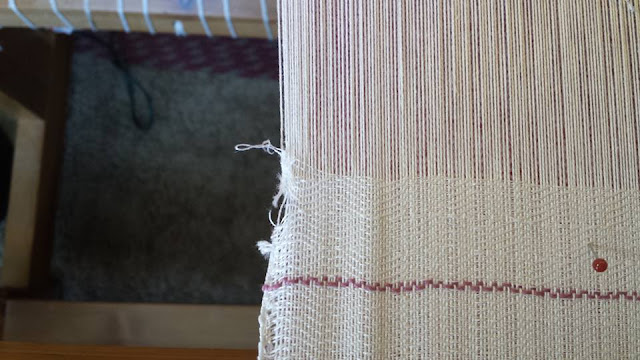 The temple broke several weft threads, along with 6 warps in a row on the left side, and one on the right.  I couldn't figure out the reason, since all had been well before.  All I can think of is the the tension on the warp was high, the temple was set at exactly the width of the warp (and had been), and I may have beat the 20/2 more firmly.  I hung some repair warps off the back of the loom, weighted, but to have 6 in a row meant lots of problems starting to weave again.  The ends could easily be pushed out or drawn in, so I had to loosely weave quite a bit with some green 3/2 cotton, careful to leave the left selvedge edge a bit loose, until I had enough "cloth" to weave normally. I don't know if the second red towel will be sellable, with the wonky hem. 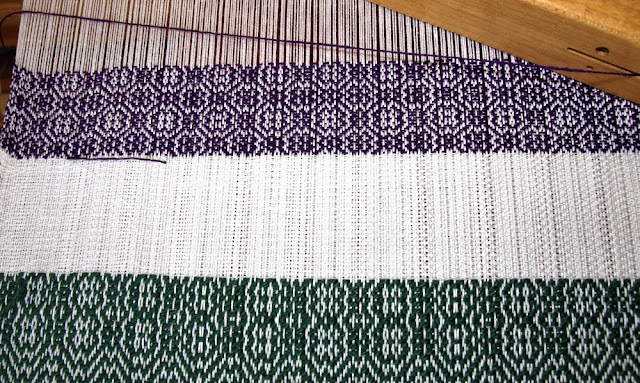 These are the colors I've used so far (after the lipstick): 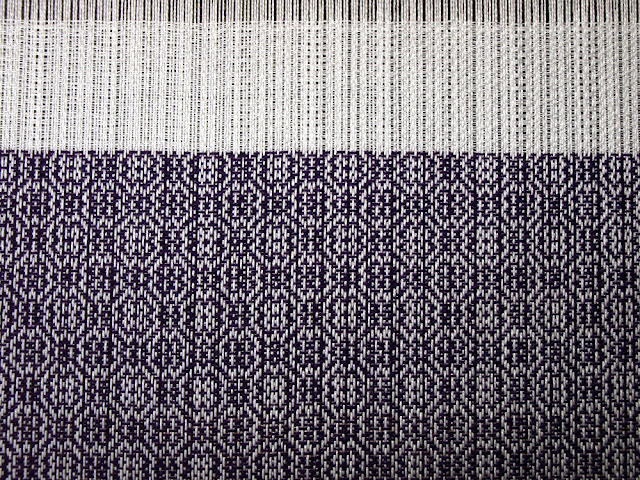 A bright blue - I wove two of these! 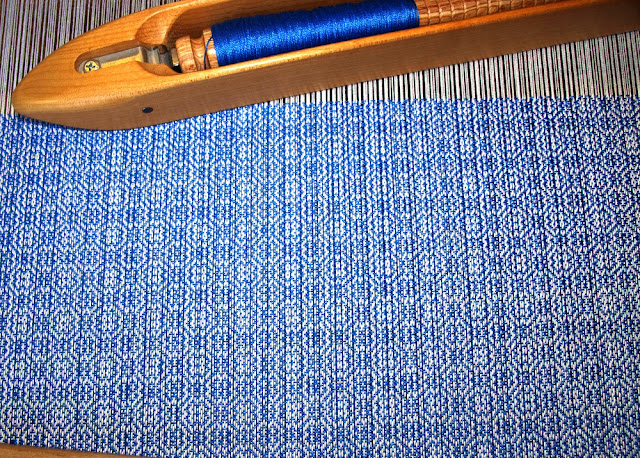 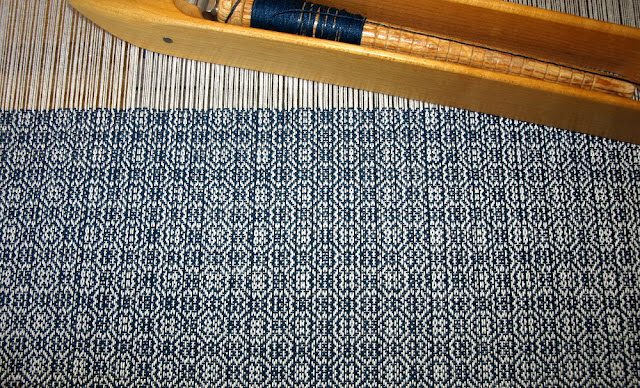 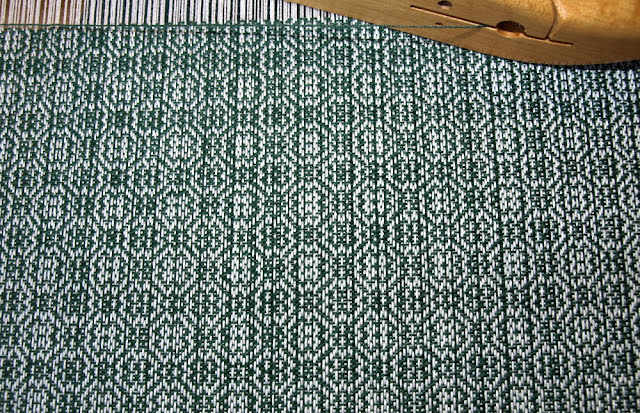 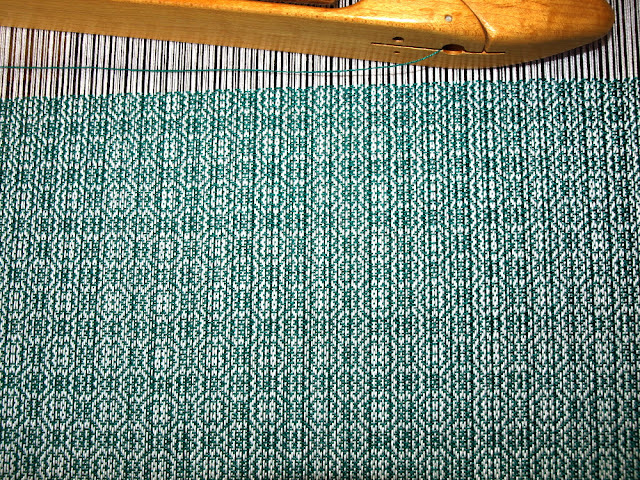 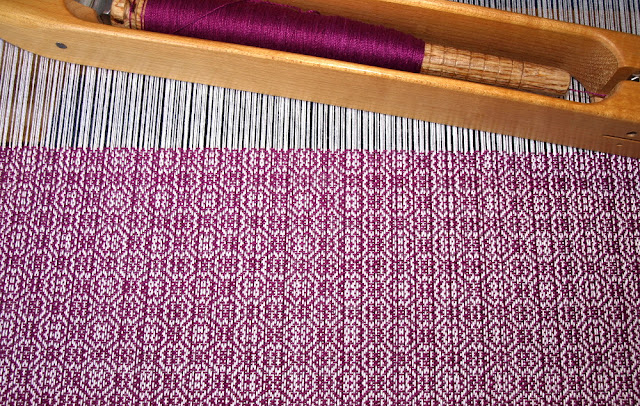 Dark Turq, which is actually a very bright aqua; 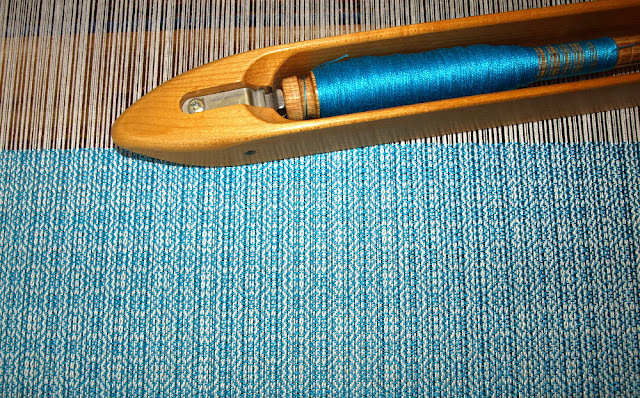 And the not quite finished Purple Passion; 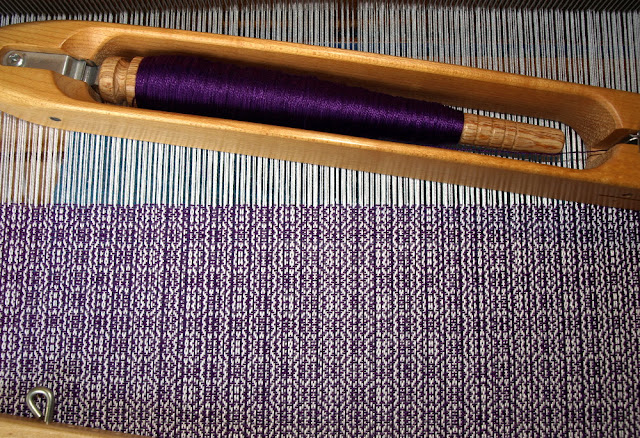 I need your input!!  Should I just repeat some of what I've already done, or do you think that some more unusual colors might interest people?  I have more yarn from my autumn-themed towels (brown/rust/bright yellow), or a light silver, or charcoal??  I also have two pinks, one brighter than the other, and two oranges, but it's hard for me to choose colors like that when I don't personally like them much.  That's why I need others' opinions!