The latest baby wrap came off the loom yesterday afternoon after a whirlwind of weaving.  I wove 5 feet of cloth in one sitting, which is a record for me, I believe.  And by one sitting, I really mean one session.  Every time I need to advance the cloth I have to get off the bench, which is a good thing.  I can't imagine how stiff I would be if I sat still for that long!

Surprisingly, I had quite a bit of warp left when I was done with this wrap, so I thought I might continue weaving so I can have some handwoven yardage on hand.  After about an inch, my brain clearly said "Stop! Enough already," so I used the warp-sparing trick that I've seen several places online. 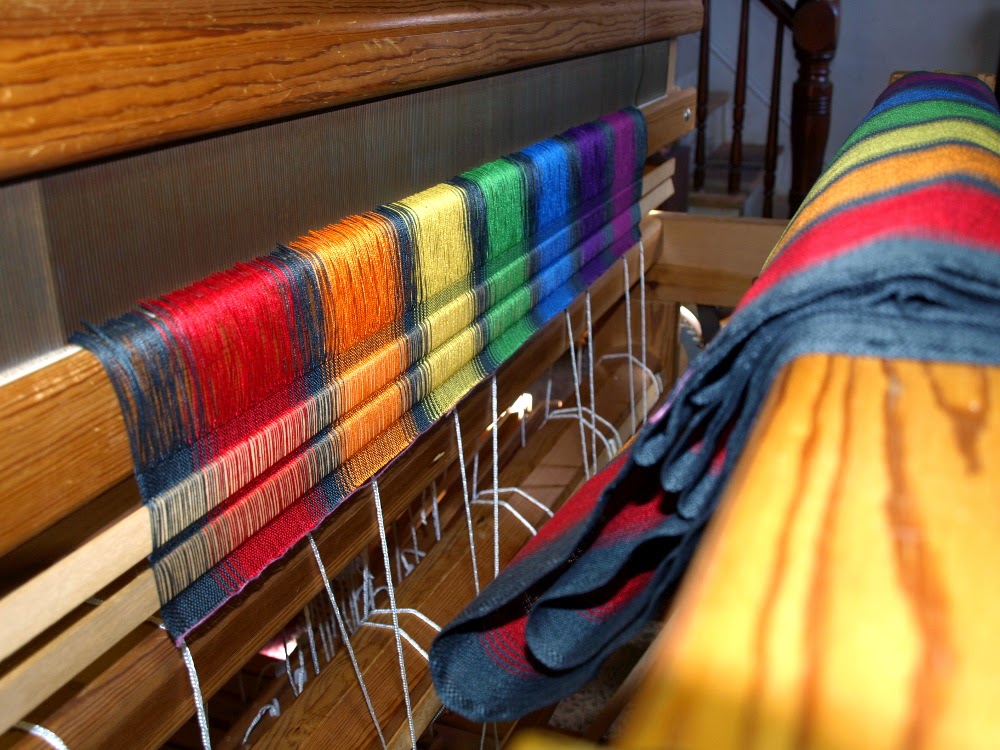 Simply weave a short header after a couple of waste picks for a cutting line, then place two sticks in the two tabby sheds, and weave a bit more.  You can then go ahead and cut on your line, which is what I've done in the above photo.  Once cut, "fold" the sticks on top of each other and lash them to your warp beam. 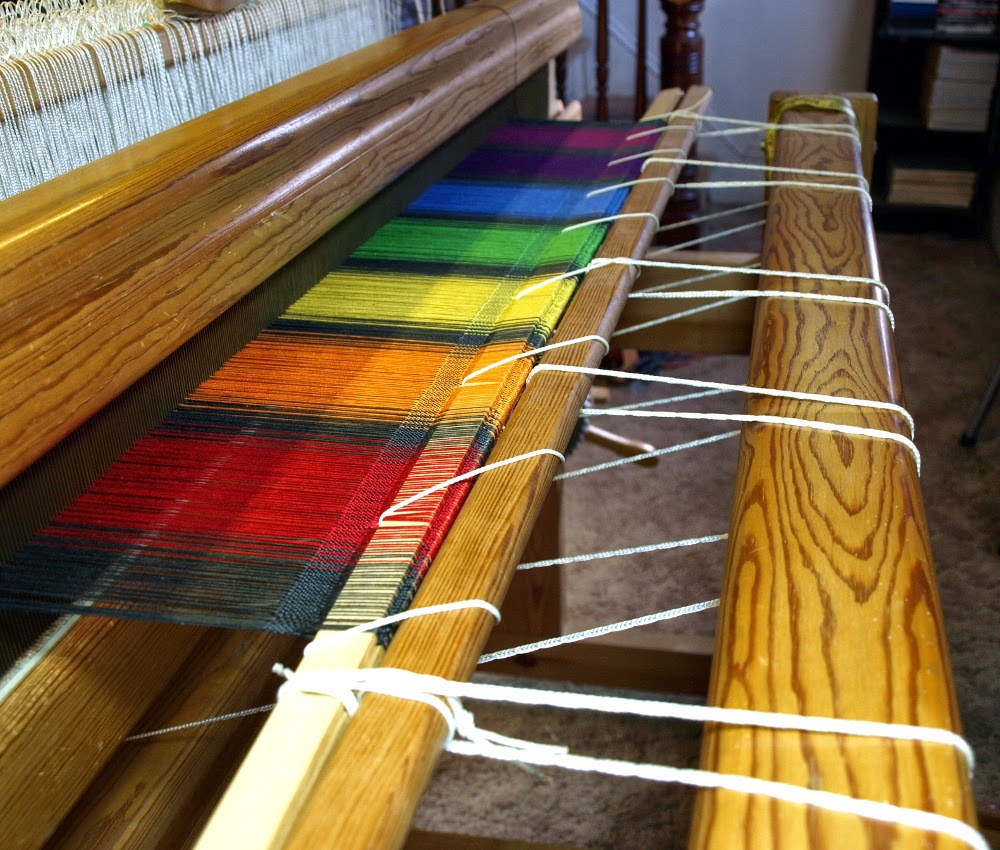 And a close up; 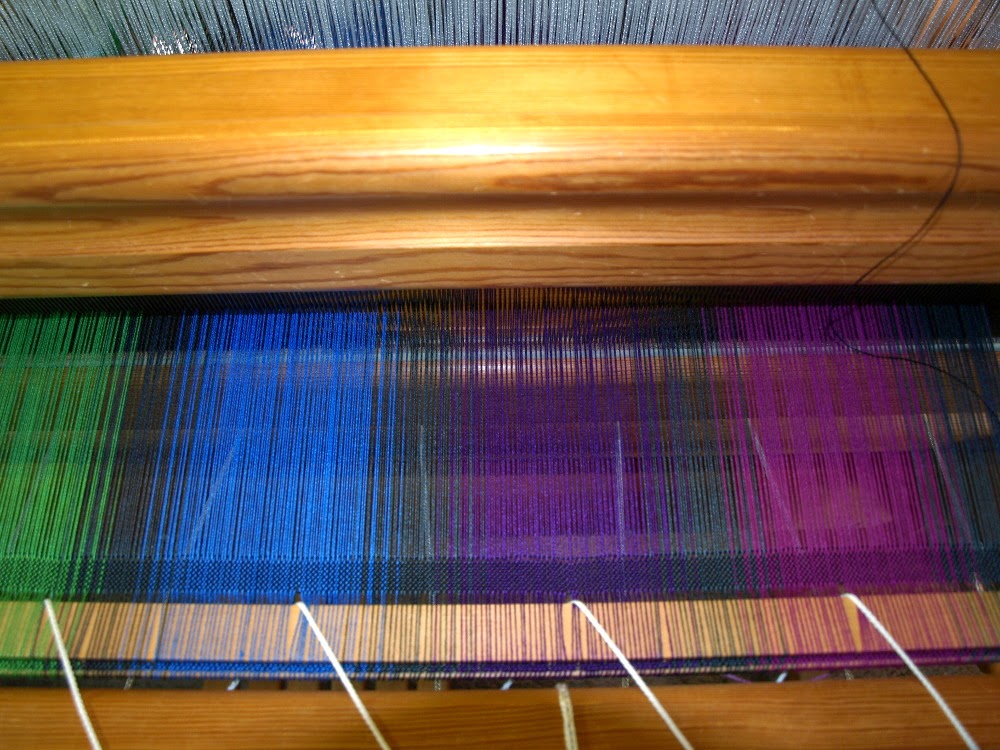 It takes almost no warp to do this, and you're already perfectly tensioned.  Like I said, I know I've seen this trick several places, but I know for a fact that I've read it on Susan's blog,  http://weeverwoman.blogspot.com/.

The wrap material is now on my kitchen table, where I hope to give it the once over this afternoon if I don't get called into work.  Then it's into the laundry, and soon to its owner!  It's always such a nice feeling to send the wraps on their way.

This past December, the hubby and I decided to get some work done on our house to tighten it up. Since we bought the place in 1987 (!), we've been chipping away at improvements, and we have made a difference in heating costs over time.  Our house is an old New England farmhouse that had no insulation in it at all when we bought it.  We built a small addition to the kitchen and added insulation there as well as in the attic.  Windows and doors were replaced, and woodstoves utilized. Despite that, there were evenings when I would literally have insulated pants, wool socks and slippers, several shirts and a wool sweater on sitting under a folded quilt, and still have to add a scarf and/or a hat to be comfortable.  Last August we had a company with a very good reputation come and encapsulate our very damp basement.  This also included spraying thick insulating foam on our rock foundation walls, and having the water channeled and out and away from our house.  In December, they came back, and did air sealing and insulating in our attic and most walls.  At the time, I remember my hubby saying we picked a great year to have this done, quite sarcastically, because the temperatures were above normal at the time.  Little did we know how true that statement was! While there is still work to do, we've been much warmer this long, cold winter, and our oil bill has been smaller.  As a matter of fact, the room above the kitchen, which I use as a studio, has been too warm at times. I've been up there working, and had to open a window, which goes against all of my frugal tendencies. The company came back today to do the final evaluation, including using an IR camera and a blower door test.  I don't have the final report, but they say the numbers are promising.  There is still room for improvement in the interior air sealing department, but we'll work on that later.

Lastly, I'm struggling a bit with some selling opportunities that have come up recently.  A local store, which has a great reputation and lots of foot traffic, has contacted me about consigning with them this summer.  They do want a goodly amount of products by June, and I'm not sure I can give them what they want.  I've consigned before, and actually have some things in two different stores, but I'm not very good about churning out stock.  At the same time, there is a new fine arts craft fair in Portland adjacent to a sidewalk art show that has been going on forever and draws huge crowds.  Obviously, there is potential for a lot of selling here, but I'm not very good at face to face interactions unless my nursing "hat" is on.  Portland is 2 hours away, so it would be one very long day, including set up, etc, and I would have to have a lot of stock available to make that worthwhile as well.  I need to make the decision by April 6, so the pressure is on.  I can't seem to decide on either opportunity.  I'd like to be able to weave some for myself and/or family/friends, plus there may be some more baby wraps in the wind. I'm stymied.

I know these are not terrible problems to have - I just don't want to disappoint people, or make myself crazy.  Guess I'll have to think on it some more.