So I finally rigged up some weights using two empty milk jugs and a couple of spray bottles, and with my hubby's help set up the warping trapeze. 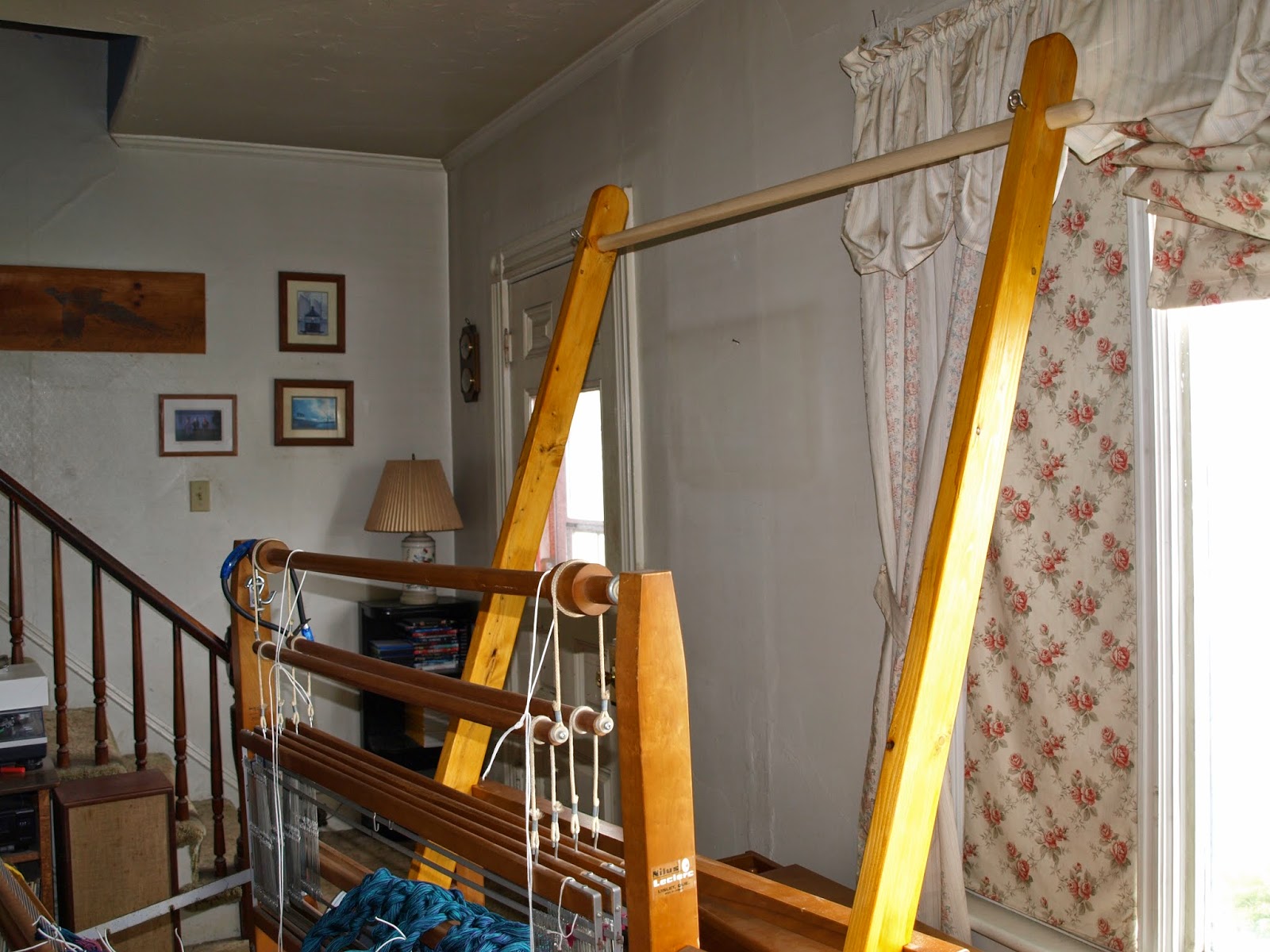 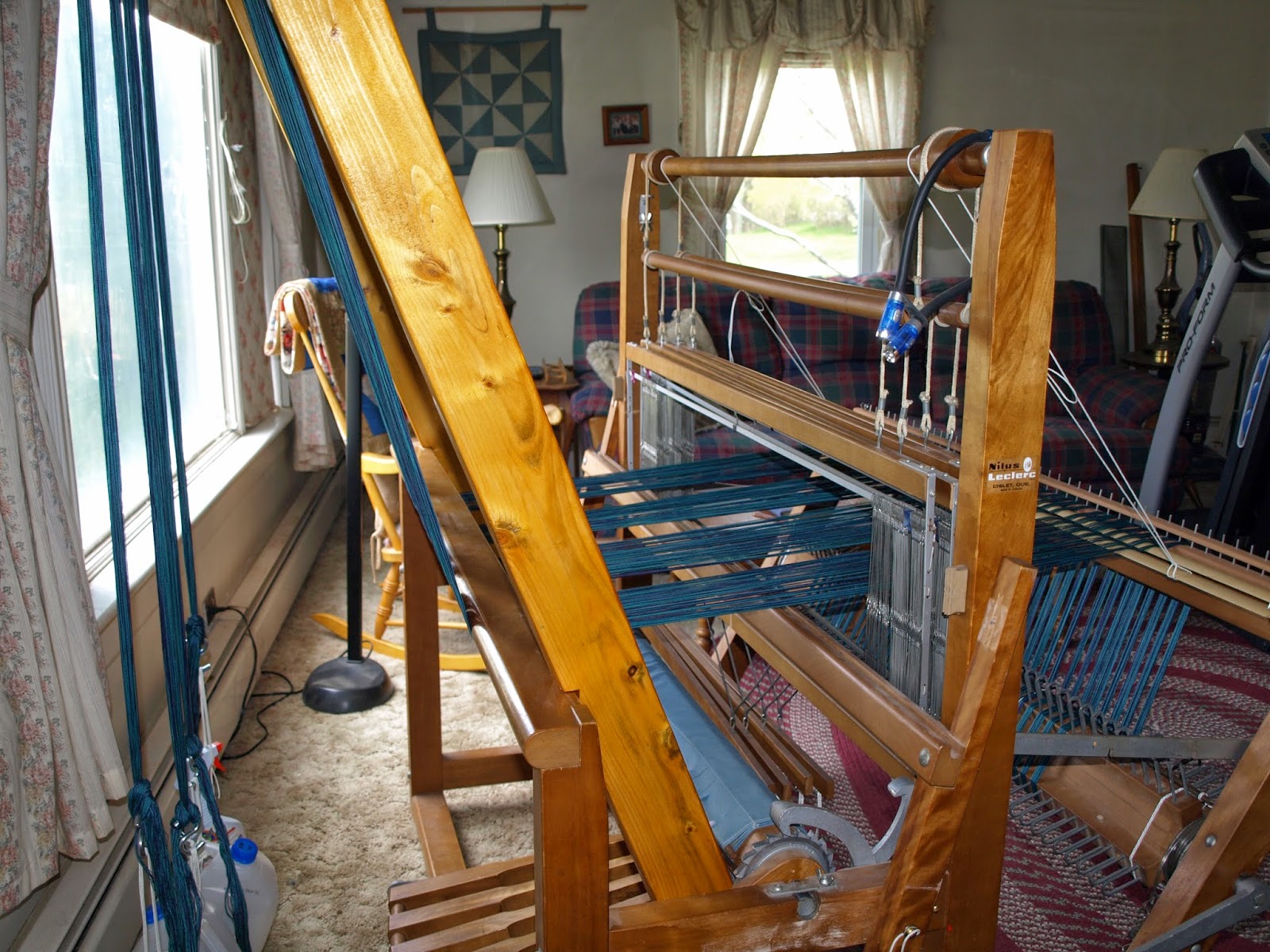 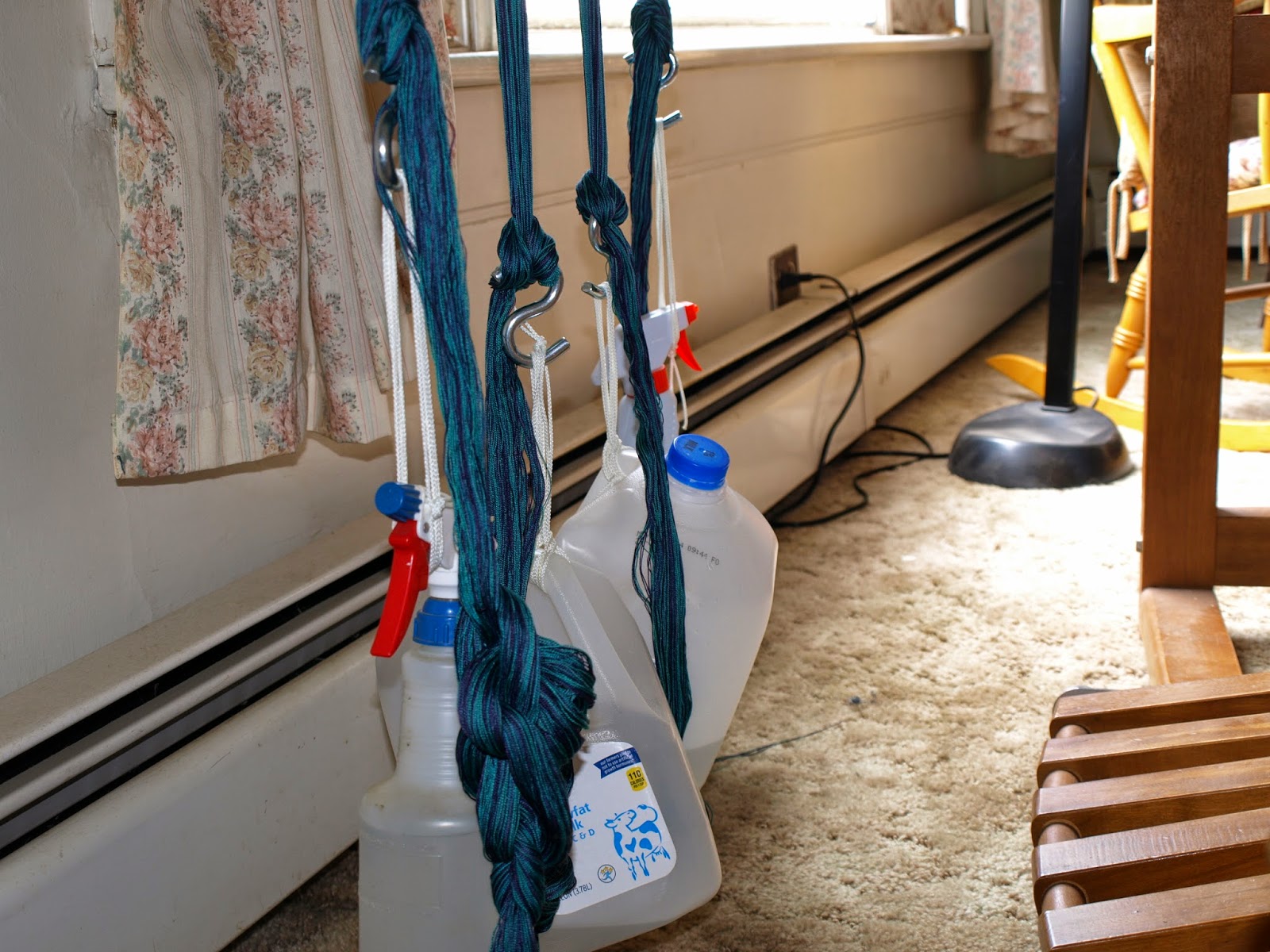 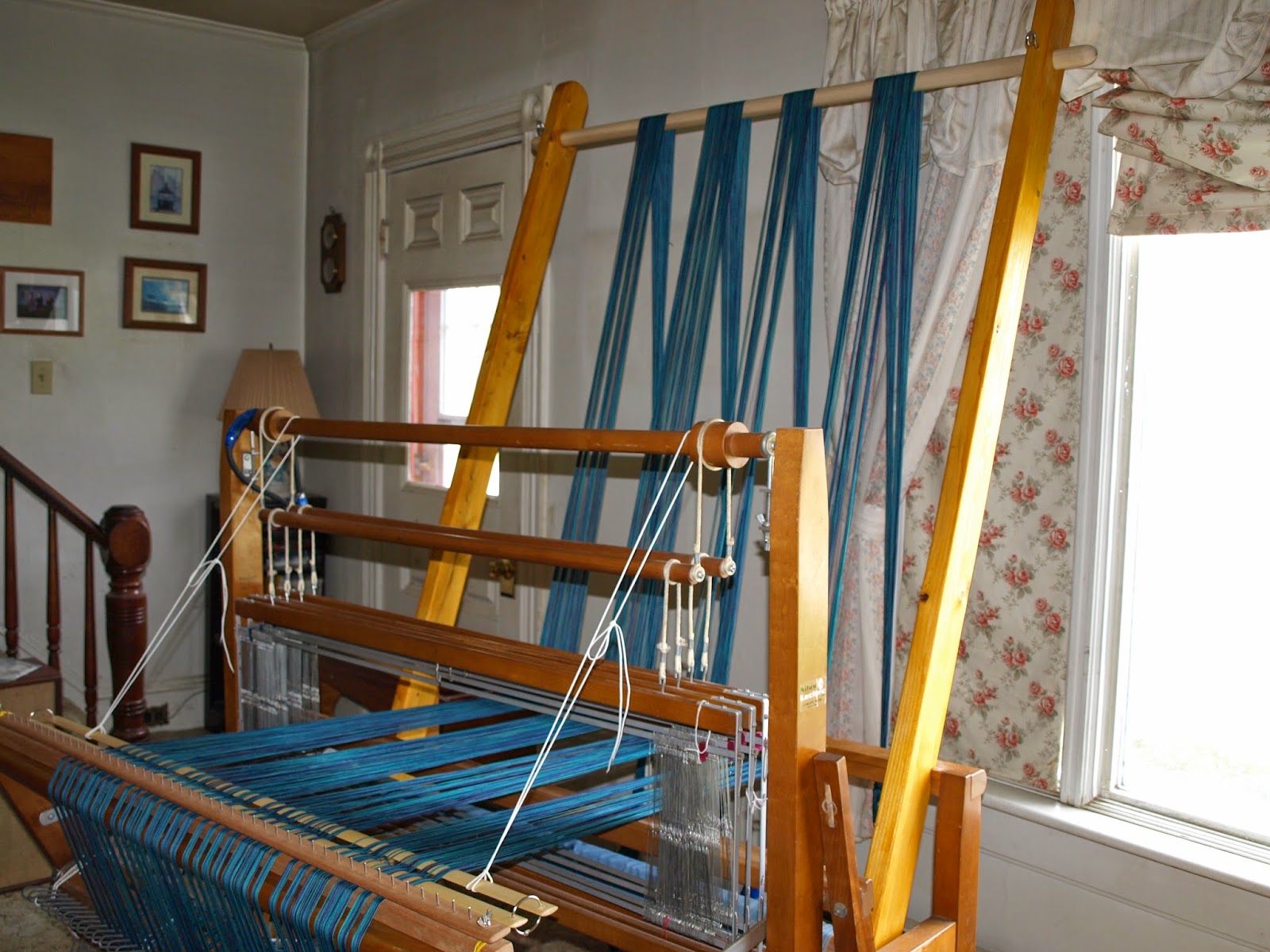 As you can see, it was quite a rig!  I needed help setting it up, since my boatbuilder husband made the rod fit just perfectly in the holes, to the point where I couldn't get them in!  He'll have to make those holes a bit bigger unless he wants to be permanently on call.  The sections of warp didn't stay perfectly in their given areas on the sectional beam, but all were wound on with even tension.  I had high hopes that this would a) speed the warping process, which it certainly did, and b) solve some of the tension issues I had with the last wrap.  This, unfortunately, didn't happen.

Right off the bat I had issues with the selvedges, even after spreading the warp and weaving a bit with waste yarn, including taking the yarn around the front apron rod to diminish draw in, .  The 20/2 cotton weft I used for the hems would not pack in at all, and caused the dreaded "smile" at both edges.  After trying to fix it with each shot, I wove another header with waste yarn and tried again, this time using a temple.  Where do you weavers put the temple when you first start weaving?  Do you all weave enough of a header to give it purchase?  If so, how do you keep the header from drawing in?

Even after I started weaving with the 10/2 cotton for the body of the piece, using the temple only helped a smidge, so I've added extra weight to the four outer most threads.  I've still had to "beat" the yarns in with my fingers every now and then to try to pack the weft in as tightly as the rest of the weft.  Does anyone out there in weaver land have any advice on how I can fix this next time?  I know other people weave with dense selvedges at times, and I'd love to know your secrets.  The last wrap also had double the density in the reed, but no doubling in the heddles, and that didn't work well either.  I lashed on instead of tying directly to the apron rod this time, but that didn't seem to make a difference.

I also made the mistake of starting the shuttle on my right, which is not my usual practice.  Sure enough, I have a couple of doubled wefts that I didn't see until it was too late to fix them.  I'm using charcoal weft with this warp, so it's much harder to see than my usual black.  AND, I'm using UKI yarn for the first time, which seems to have a very lively twist in it.  Every now and then a weft shot has not completely entered the shed, and I've had to unweave to pull the little loop left behind.  This happened even though I'm using an end feed shuttle.

Here's a photo of the offending wefts: 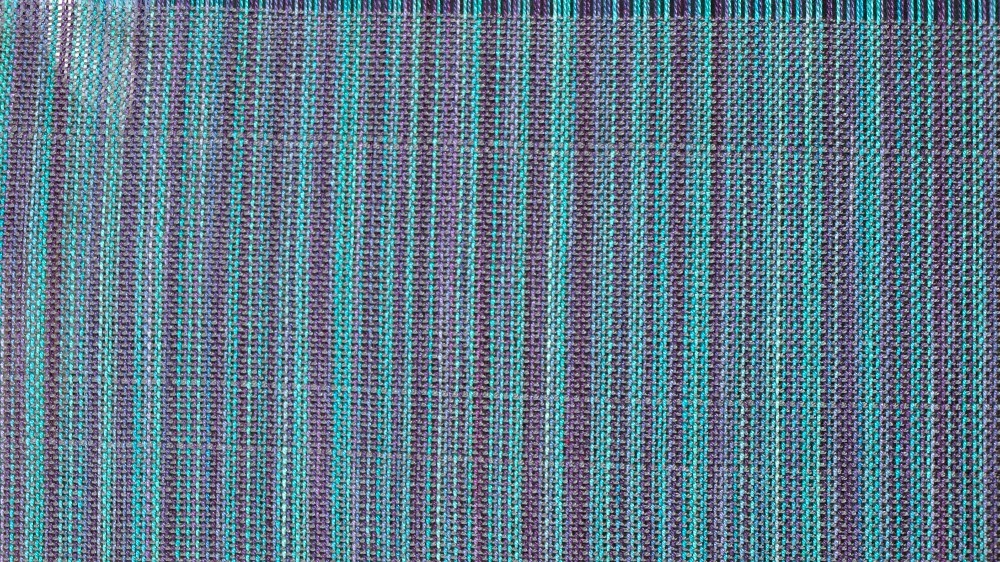 As you can see, this baby wrap project has thrown a lot of issues at me.  I'm trying to look at this as a learning opportunity and just do the best I can with it.  Plain weave shouldn't be this difficult, but if it is, then all I can do is accept it and keep moving forward.

So, how about some thoughts on a name for this wrap?  I originally thought "Caribbean Shadows" for its beautiful turquoise and eggplant hues, but then I thought about "Emeralds and Amethyst."  What do you think?  I'm open to any other suggestions!

Last time I told you about my painting foray on my porch and promised photos.  Of course, it has done nothing but rain since then, so today, on my way to get groceries, I snapped a quickie with my phone so you can see the effect. 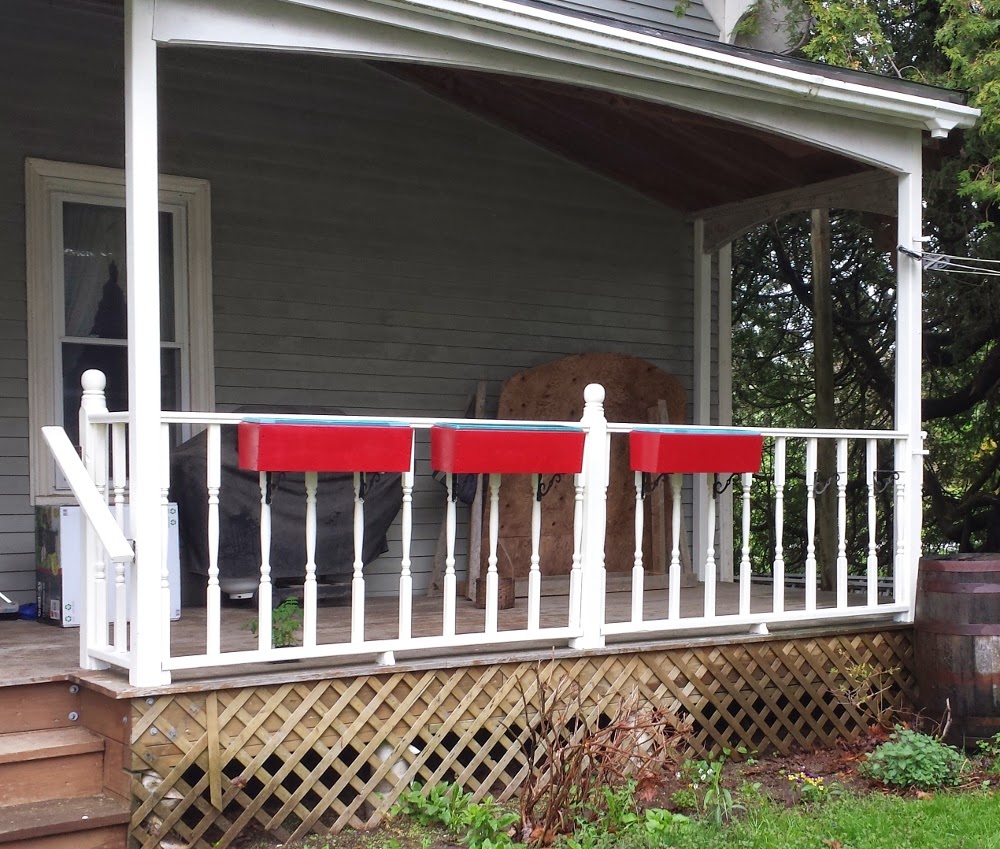 Just imagine all of that with weathered wood, and you'll get an idea of what an improvement that is.  Soon we'll be off the to gardening center to get some flowers for those boxes!