A Bit of This and That

Sorry for the delay in posting - again.  Life just gets too busy, and I'm dabbling in several different projects right now, so there are no great posting opportunities.

On the knitting front, I started and finished my socks using my first dyeing experiment.  This is KnitPicks Bare superwash merino and nylon, and I dyed it many moons ago.  I was a bit afraid to try using it, if only because it still smelled SO strongly like Koolaid, plus I've been so enamored of knitting with handspun that the idea of knitting with this almost texture-less yarn held little appeal.  Here's the yarn: 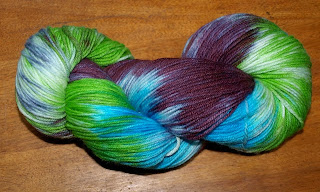 and here are the socks: 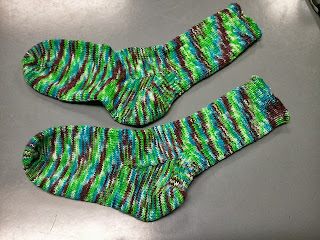 They are so much fun to wear!  I am NOT an in-your-face bright color person, but these add just the right amount of pizzazz.  I soaked them initially in Euclan, which did nothing to remove the smell, but the machine washing afterwards did the trick.  All in all, a very fun project.

Also on the knitting front, I've tentatively started my sweater with my handspun Faulkland yarn.  I chose the "Henni" cardigan, http://www.ravelry.com/patterns/library/henni, so it will be a lightweight sweater, but that's a good thing.  I was trying to figure out how to knit it so the different colored skeins 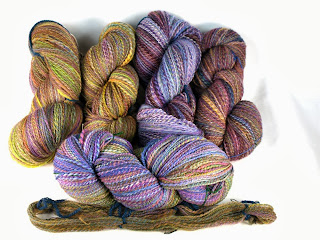 could flow well, but all I ended up with were well-defined stripes, which was not my intention.  So I frogged most of what I'd knit (not much, really) and think I'll just knit one skein at a time and go from most purple to least purple.  Can't hurt, right?

I've started spindle spinning some Panda fiber from Younger Yarn on Etsy (https://www.etsy.com/transaction/139758191?ref=fb2_tnx_title).  The fiber looks alot more orangy-reddish than it is in person.  I separated the fiber into 6 equal pieces and have completed one of them on my Bosworth spindle. 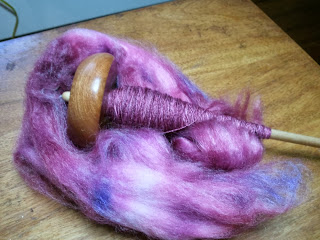 As always, Panda spins fantastically, at least it does when my cat's attention can be directed elsewhere.

Weaving wise, I just took a photo of the shorter Falling Leaves scarflet with its new Celtic pin; 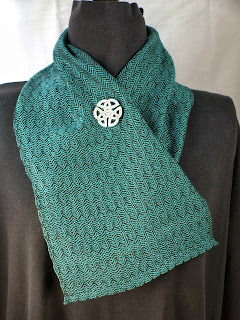 Hard to get a good photo because of the flash, and also my inability to capture the turquoise color well. Here's a close up so you can see the pin detail, but the scarf's coloring is too green here; 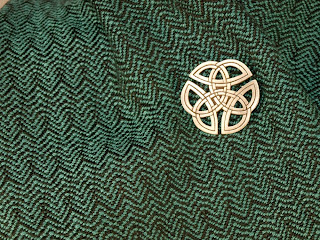 Now I am taking the plunge and trying doubleweave.  I've wished that I could weave something wider than 24", but have always been intimidated by the idea of doubleweave.  I've read about it, seen wonderful samples of it, but never felt like I could do it.  There is a weaver on Ravelry, Amanda Cutler http://www.ravelry.com/people/cutler070805, who is a prodigious weaver and sharer and who also has the same loom as I do, the Baby Wolf.  She has produced several doubleweave twill blankets, and I was inspired by how simple she made the process appear.  So, after a few messages back and forth, I went and purchased a bunch of acrylic yarn, and have just started the sample.  This is the first time I have warped the loom for the sole purpose of sampling, and let's just say it didn't get off to a good start.  I thought I may have wound the wrong number of ends, so when I went to thread the heddles, I had to start with the right edge of the yarn, and thread leftward.  Only problem is, I'm a lefty and always do it the opposite way.  The threading from her draft is a bit challenging as well.  When she designed the draft she made it so that the treadling will be easy, but the trade off is that the threading isn't.  How about 4-6-3-5-2-8-1-7??  I did "get it" after a bit so I didn't need to keep referencing the draft. 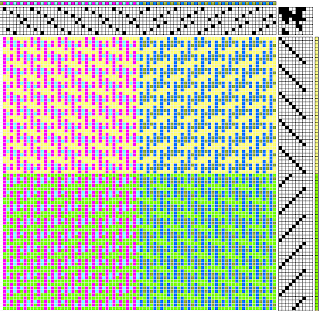 So here is my meager offering, the yet to be sleyed sample, using 8/2 cotton because I have it on hand. 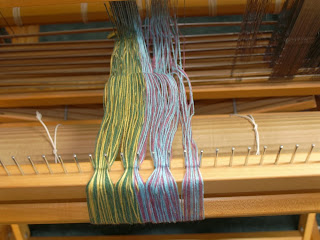 Next time I'll hopefully have the finished sample to show, plus whatever else comes along.