As most of you have surmised, I'm not one who loves to work with fringe.  More often than not, I hem my scarves, rather than hand-twist them.  When I decided to weave up some variegated scarves to finish the consignment order, I decided to let them have fringe, since the weave structure was so simple (tabby).  So I measured warp for 3 scarves, including enough for fringe.

As I was weaving the first scarf, I remembered a post that I had read recently from Laura Fry (http://laurasloom.blogspot.com/) about using sticks to help keep even tension when allowing for fringe.  I realized it could become an issue for me, since 2 scarves would equal ~16 inches of unwoven warp to wind on the cloth beam.  Laura had pointed out that the sticks were necessary to keep the unwoven warp from "falling off" the roll of cloth on either end, thus wrecking the tension.  Did I have any sticks handy to use?  Of course not!

I mentioned it to my hubby, who has a shop full of (rough) wood, but I didn't hold out a lot of hope that he would have anything suitable soon, since he was in the middle of a project, and the sticks would have to be super smooth so's not to snag any yarn.  He headed down to the shop and a half an hour later he reappeared with a couple of beautiful, smooth sticks, approximately 1" wide, to see if they would suffice.  He said they were made of "jungle wood," which I've never heard of.  Does anyone else out there know what kind of wood that might be?  They were perfect for the task, so he made more than enough for that warp.  I've yet to ask him about the origins of the wood, but hopefully I'll remember to one of these days. 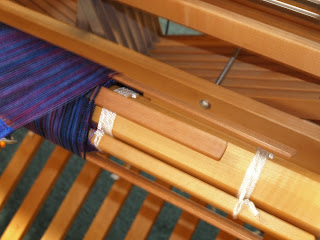 You can just see them around the cloth beam, doing their job in fine fashion.  I'm sure to most weavers, this is a no brainer moment, but it hadn't occurred to me before, plus to have hubby produce something so quickly was a miracle in and of itself - we still have woodwork that is not finished from the 1980's!

The scarves worked up so quickly, and I LOVE how the variegated weft interacts with the warp; it almost creates a plaid-like design. 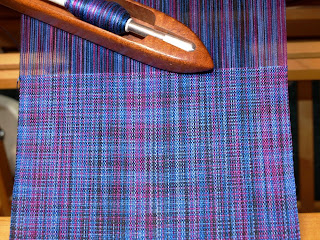 My next project is for more tencel scarves, this time in a "falling leaves" design, graciously posted by a weaver on Ravelry.  I'm using black tencel for the warp, and a light, minty green for weft. 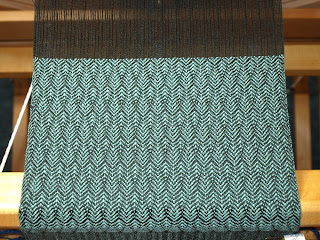 I love how they are coming along, but it has not been a happy project for me.  I had to redo most of the steps at least twice; threading, sleying, even tying on became onerous.  And just today, my second day of weaving, a floating selvedge broke.  Maybe the universe is trying to tell me something...