Hot Enough for Everyone???

I don't know about you, but this protracted heat wave has overstayed its welcome. Everyone is tired and bit grouchy, me included.  Way up here is northern New England this is a very rare occurrence indeed.  Normally, we might have one or two days that hit 90 here on the coast, but some summers we don't even reach that mark, which is A-okay with me.  I personally am a huge fan of moderation, and don't care for the extremes of winter or summer, but usually our moderate summers make up for some very long cold, snowy, dark winters.  Not so this year!

The weather is also affecting my ability to weave for long periods.  My loom is upstairs, and I do have a fan which helps a lot, but after an hour or two, I'm drained of energy.  I'm still trying to weave off 5 more scarves for the Center of Maine Crafts' order, but it's slow going.  The first variegated scarf is done, with enough warp left for 2 more.  I used black tencel for the weft of the first one. 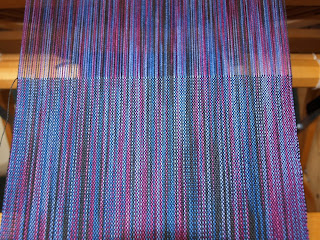 I've also wound the pirns for the second scarf, this time out of the variegated yarn itself.  It should make for an interesting bit of color play.  I love the way the yarn looks after being wound.

And, to give you a better idea of the shine that tencel displays;

I'll still need another scarf or two after this warp is woven, and was hoping to start working on an idea I had, but my weaving software won't open on my computer!  My computer is a Linux machine, but I've always been able to use the Windows drafting program through "Wine" (an emulator - type program), but I can't get the darn thing to open no matter how I try.  I contacted the company that makes the program, Fiberworks, who said I might have to download the program again, so I tried that and cannot even get one to download.  SO frustrating!! I may have to use my laptop from now on, which is not optimal for my needs.  Maybe I should go back to graph paper?!?  Did I mention I was a bit grouchy?

Here's hoping that temps (and my temperament) will moderate soon!