Life just doesn't seem to want to slow down, so I've only gotten small amounts of work done, at least in the fiber realm.  I was really drawn to some fiber I purchased from JulieSpins on Etsy (https://www.etsy.com/shop/JulieSpins).  She has a group on Ravelry that I stumbled upon, and some of her saturated color dye jobs are to die for.

These braids of "Paradise" caught my eye, and so they are my next spinning project. 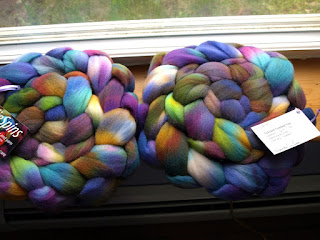 The fiber is Falkland, which is the same fiber as my handspun sweater from a couple of years ago, so I know it makes a comfortable sweater.  Each braid is 6.2 ounces, so I may have difficulty getting enough yardage, but I'll cross that bridge when I get to it.

Here are a couple of bobbin shots I took yesterday, as I spun up one quarter of one of the braids. 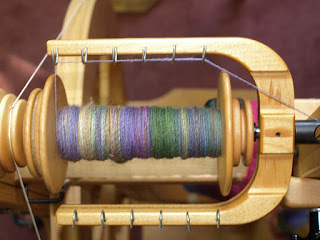 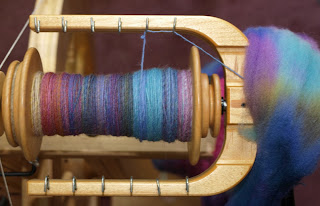 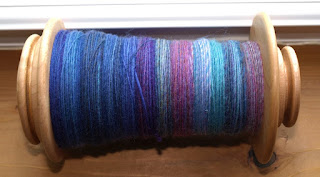 I've decided to spin it fractally, meaning that I divided the top in half lengthwise, then divided one of the halves in half again.  This will change the length of the color changes, making for some interesting yarn, I hope.

I've also started measuring for my next towel warp.  I'm going for more of the random multicolored pearl cotton towels, since they seem to be getting alot of attention on Etsy, even if no one is buying them. 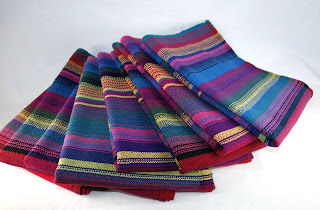 I enjoyed weaving them very much, so here comes another batch.  I've gotten about one quarter of the warp measured - not much, I know, but every little bit helps.  I didn't have time to get to it today, because it was a "kitchen day" for me.  Veggies to chop, cupcakes to bake, washing to be done - all of that led up to lunch and then some.

My son's birthday is tomorrow (hence the cupcakes), though I won't get to see him until quite late. He's coming home for his grandfather's funeral service, which is being held at a local botanical garden.  It's been 2 months in the planning, so it will be good to finally have it.

As for the birthday, I'm a firm believer that, as important as birthdays are, I think it is just as important to acknowledge the mom, as it is her "birthing day."  Yes, yes, maternity nurse here, but don't you think that all the love, work, and energy that goes into birth should somehow be a part of the celebration?  I know I do, so cupcakes for me as well!