Signs of the Times

The events of this week has left me, like many many others, drained, worried, heart-broken and elated.  I was born and grew up just outside of Boston, and attended college there, so my formative years were spent in those environs.  Even though I've spent almost all my of my free time in Maine starting at age 9, and I now call it home, the place where my heart and hearth are, it doesn't take much to bring me back to my oft-downplayed roots.  I've known and walked many times on those streets.  To see such carnage, then the fear, the hunt, and finally the elation does a number on my emotions.  I choose to focus on the good that came from this, and that always seems to appear in times of tragedy.  Americans, for all of their bluster and polarized views, are a people who want to help others in times of need, who often put their own personal safety aside to rise to the occasion.  So much happened  in our nation this week - the bombings, the poison letters, the massive explosion, the shootouts, the chase - that we are probably all suffering from emotional whiplash, but my hope is that as things calm down, that we can remember who we are and the good we are capable of, and not focus on the arguements and divisiveness that seem to pull us apart.

On a fibery note, I've only just gotten the warp on my loom for some multicolored tabby towels, a project I figured would be a quick one.  I have a couple of shops that need some of my towels as they open up for the tourist season, but life keeps getting in the way.  We recently had a death in the family, and so have many things to attend to.  I know that the loom will be waiting when time is freed up - I just hate to disappoint people.

I have started to knit yet another pair of handspun socks, still aiming for the elusive grist that will give me a long-wearing pair.  My last pair, 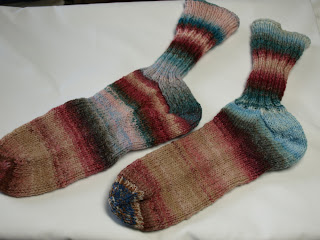 which I n-plied on my spindle from Targhee wool, fit great and are so comfortable, but I've put 3 holes in the heels so far. Remember, I had spun two skeins of this, and knit the second skein on the same size needles as the first, without doing another swatch.   The first one was definitely my fault, as the gauge was too loose. 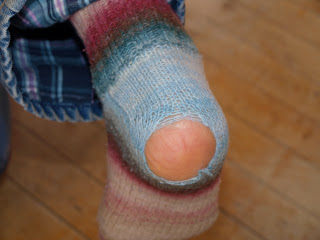 I frogged that sock and reknit it - so far so good there. Then the other sock, which seemed tight enough, developed a small hole on the bottom of the heel.  I researched darning techniques, and ended up with a nice, firm patch.  Wore them several times, and stopped wearing them at work (I was afraid my insoles, which have broken down slightly, were causing wear), only to have another, smaller hole appear next to and outside of the darned patch.  It now sits on my bureau, forlorn and, well, not forgotten.  I've just been too demoralized to patch it, too.  I don't think I have enough yarn to reknit the entire sock, and obviously the gauge isn't right with this one, either, though it appears very snug.

Instead, I spun up some merino/bamboo/nylon fiber on my wheel, a true 3 ply,spun worsted, trying to be consistent throughout. I ended up with 2 skeins of exactly 114 yds, which was great on the one hand, meaning I had been successful with consistency, but also not great because I got very little yardage for 4 ounces. 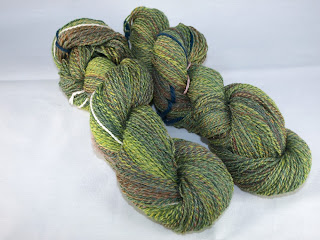 I planned on using some millspun for the heels, and to knit with an extra single for the toes, so those two areas would be stronger, hopefully.  After a swatch, the first sock is being knit on size 1's, and seems to be coming out well. 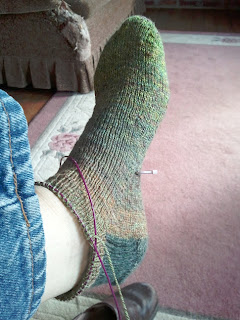 I don't want to continue knitting up the leg, though, because a swatch with the second skein is proving to be too loose on size 1's, so I am waiting for size 0 needles to arrive in the mail. I have NO desire to knit socks on size 0's, but I don't have enough singles for the entire foot of the sock, so I don't see a choice.  I'm trying to figure out in my head what to do when I go to knit the heels, because the millspun will be too tight for the size 0's, so I will somehow have to decrease the stitch count, then increase it when the heel is complete, to start back up with the handspun, I think.  Any suggestions??

And PLEASE, someone, wave a magic wand or rap me over the head, or something so that I can figure out how to spin a decent sock yarn, both in grist and in yardage.  I know you people out there can do it - wanna let me in on the secret??? Pretty please?????