There's been an awful lot of crafting going on here, yet not alot to show for it - yet!  I've been weaving off some holiday tea towels, and as is the norm lately, they didn't turn out at all as I envisioned them.  They were meant to be more log cabin towels, but I, in a moment of brain coma, decided to thread them differently, still thinking that they would weave up in the correct pattern. I believe this is called "magical thinking," in developmental jargon, and it is common amongst small children.  What does that say about me, I wonder...

After my disbelief that the project was not going to end up as I'd hoped, I made peace with it, and actually like the new design.  One towel was used as a sampler, then the next 5 were woven in one design.  I have only a few photos of them while they were still on the loom - the rest will be in the next post.

This photo is after I had finished dressing the loom: 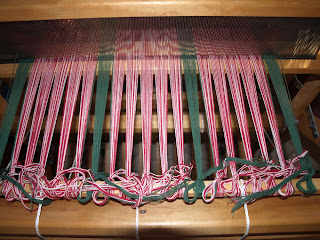 And these are after the weaving had begun: 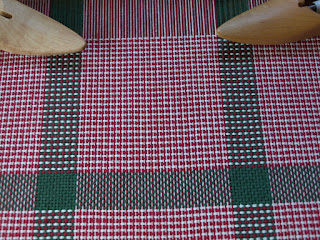 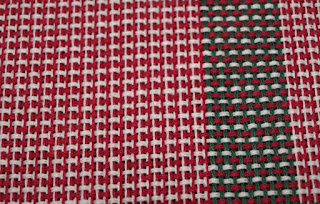 As you can see, the colors are just right for the holidays.  I also wove them a bit smaller than normal - 15.75" X 25."  Still plenty large for use, but this way I got more towels from the yarns and can offer them at a slight discount.

In my "spare" moments, I've been knitting a sweater for my son.  The pattern is the "Hedge Fence Sweater," a pattern that I purchased off Ravelry.  It is quite intricate, all knit in the round.  After another senior moment error in the first sleeve, I have now completed both sleeves, and the first repeat of the body.  I think it will be a lovely, warm sweater for the winter, if I can get it done.  Cable knitting is not a very quick technique, at least for me, so all other knitting, and all spinning, have been put on the back burner.  My weaving has also slowed, though I can't really afford to do that with the craft fair coming soon.  It's hard to find a happy medium sometimes. 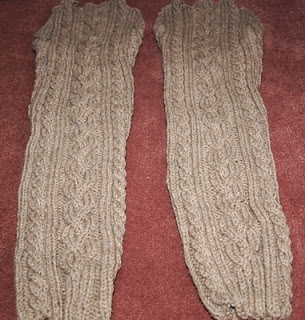 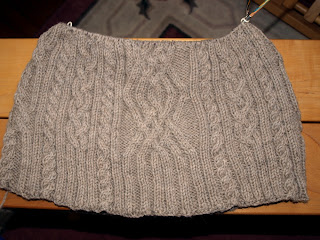 At least the hot, humid weather seems to be on its way out, so these projects are more appropriate for the season.