Something Blue, and Green, and Yellow, and...

Just a quick update today.  I found that, despite feeling like I've woven an awful lot of towels recently, my shop seems rather empty of them, as did my consignment shops.  So, I got rather busy during this, my week of vacation, trying to weave up somthing to display, sell, and share.  But when you are supplying shops as well as your own, weaving several towels doesn't get you very far.

A few weeks ago I wove 6 towels, 3 blue and 3 green, all on a white background.  I now have 2, 1 blue and 1 green, and the green one is the "runt" of the litter - I ran out of warp on my loom, so my last towel is a bit short.  I always keep the less than optimal ones for my shop. 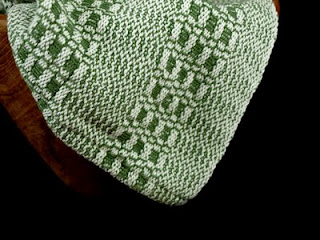 Then, this week, I wove off 4 beautiful towels in autumn colors, and had the same thing happen again!  I followed the pattern, added the recommended amount of warp for the 2 extra towels (the original pattern made 2 towels), and even after leaving out a few repeats, I still ran very short for the 4th towel.  So short, that I had to list it as a "second" in my shop.  It is only16.75" X 18.5", way too short to be sold as a full size kitchen towel.  Other than that, it's perfectly fine. 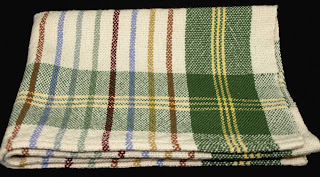 The other 3, which also have weft stripes across the towels, are now on their way to the shop in Tenants Harbor that I consign with, and my Etsy shop. 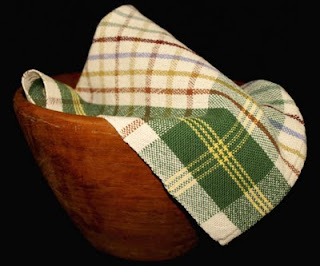 I've woven these towels once before, but this time I had to substitute a few different colors in the mix.  I still think they look very autumnal.

Next on the loom will be some log cabin towels with green, bright red and off white, for the holiday sales.  After that, maybe some more chenille scarves.