Just a quick post to show the end result of my weaving and spinning efforts last week.

The tencel scarves came out quite nice, I think.  The both feel a bit more dense than my other similar scarves, but are still silky to the touch.  The first is hemmed without fringe, and the curves remind me of line drawings of classic wooden boat plans that my husband has used when building wooden boats. 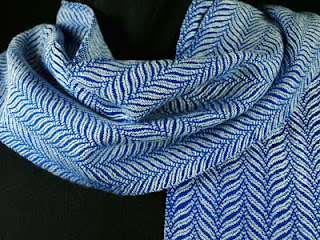 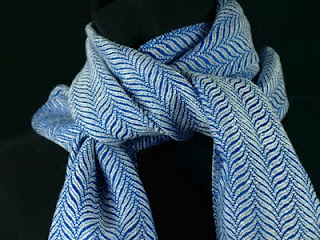 The second scarf was woven on the same warp, using the same threadings.  I merely changed the treadling from 1-2-3-4-5-6-7-8 to 1-2-3-4-5-6-7-8-7-6-5-4-3-2-1.  Practically brainless, yet it produced a scarf with wavy lines surrounding intricate diamond shapes.  And I did include twisted fringe, despite my lack of enthusiasm for it.  I tried to make them a bit bigger, thus reducing the time it takes to create them, but it still took me the better part of a day to finish both ends. 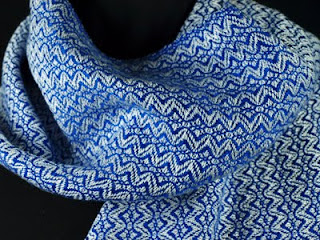 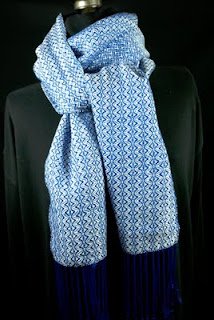 I loved how the simple choice of royal blue and white contrasted so dramatically in both scarves.

In my spinning last week, I had already finished up the singles of hand-dyed Norwegian wool, aiming for my first chain ply.  After letting the singles rest for a bit (due to schedule limitations as much as anything), I set up to try the first bobbin on a Sunday afternoon. I had an hour or so before I had to make dinner and get ready to go to work, so I thought I was all set.  WRONG!  Lots of overtwisted yarn that wouldn't feed onto the wheel, too tight tension in the lazy kate...  It took my 45 minutes of great frustration to undo the plying I had attempted and unknot the fiber to the leader on the wheel.  I was so disheartened, ready to abandon chain plying forever.

Fast forward another few days.  I reviewed the youtube video for technique, gave myself a large time window, and played with my wheel's tension before I started plying to ensure a good take-up.  Worked like a charm! I was able to ply up both bobbins, and ended up with 142 yards or worsted weight 3 ply. 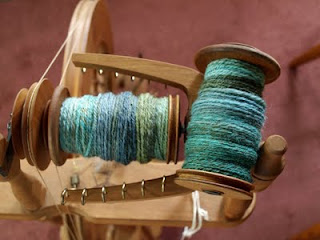 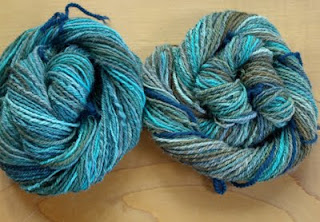 Not the softest yarn I've spun, but I think I'll knit them into fingerless mitts to show off the long color bits.  Since then it's been too hot to do anything, but I think the weather has broken, so I'll be warping the loom with something soon, and I might have some exciting news in the spinning department by next post!
Labels: chain ply scarf tencel twill