Opened a seconds shop section, that is.  It gives me a place to list items that are not up to my standards, due to human error (who, me??), but are perfectly fine for use.  In fact, the errors are usually quite small and, some tell me, pretty unnoticeable.  So far there are only 2 items in there, but if you're looking for a bargain, take a look!  Everything in there is 20% off.

I've also been working on a couple of scarves this week.  I was getting really tired of towels, so I warped the loom with a beautiful royal blue tencel, and am weaving two undulating twill scarves.  Though similar, they are quite different from each other, just by changing the treadling. 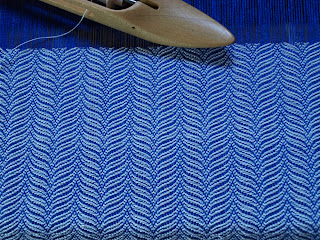 And the second, which I just started yesterday.  Probably won't get to it today... 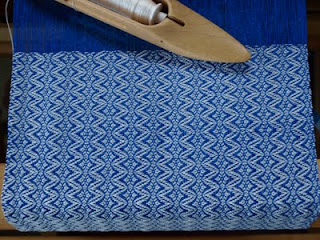 This one will have the dreaded twisted fringe.  So, which do you like better?

Also, I've found a bit of time to do some spinning.  The fiber was purchased a long time ago, and it is Norwegian wool, dyed by Spunky Eclectic.  I forgot to take a photo of the fiber pre-spin, but here are the two bobbins full of singles: 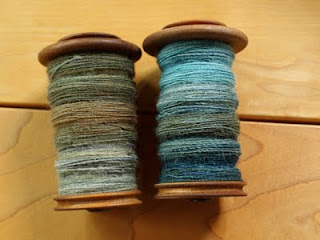 There are some gorgeous aquas and deep teals in there, as well as the browns, which are not my favorite.  These bobbins won't be plied together.  Instead, I'm going to attempt a chain ply, which is basically plying the single on itself by chaining it like crochet, except you do this while adding twist and feeding it onto the bobbin.  It is a great way to preserve colors, and gives you a 3 ply yarn.  I need a good block of time to try this, since I'm expecting trouble!  Hopefully, I'll succeed at this and post a photo of the finished yarn next time.