After I finished weaving up four more log cabin towels: 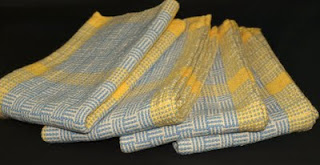 I decided to bite the bullet and start a scarf project with some chenille I've had for a bit of time.  Remember this? 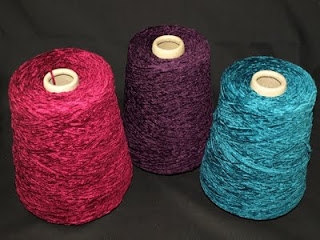 I wanted to weave some scarves, using the colors in such a way that they gradually changed from color to another.  I tried to use the Fibonacchi series of numbers, but I couldn't make the numbers work out to give me the look I wanted and still have a scarf of proper proportions, so I made something up.  Yup. I, the person with the ever so slight Type A characteristics (ask anyone who knows me), winged it.

Winding the warp entailed alot of cutting and knotting, to avoid tangles.  If anyone out there has any idea how to wind alternating warp colors without tangling, I'm all ears.  Chenille is very soft, somewhat fuzzy, almost ribbon-like, but also unevenly so.  It takes up alot of space on the warping board, so I had to wind it in three installments.  Here's a photo of the last: 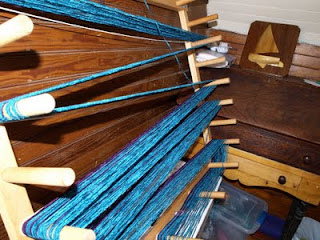 It's hard to see the colors here, but this is some of the teal and deep purple.

And after tying it off, just prior to pulling it off the board for chaining: 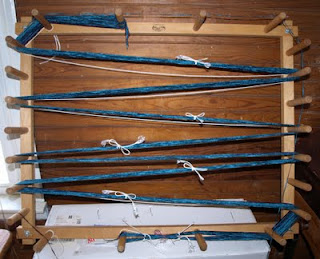 The "mess" after all three chains are off the board: 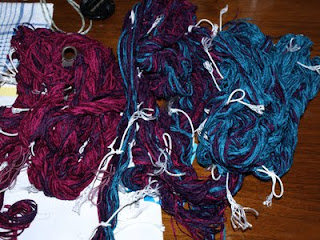 At this point I am in near panic mode.  Normally, with the yarns I am used to (tencel and cotton), the chained warps are very orderly and clearly under control.  These three, as you can see, are clearly not.  They only seem tamed where they are tied.  The chains themselves came off the board unevenly, which I cannot explain.  It leads to problems when putting the yarn on the loom.

After my trip to the hospital for some tests, I faced my fear and started to put them on the loom.  The beginning of the process looked like this: 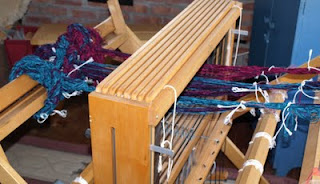 A bit better, but still  pretty raggedy.  Big blobs of yarn on one side, loose loops hooked over metal posts on the other.  As I feared, once I started actually winding them on, a yarn or two from each bundle was looser than the others, and I had to carefully separate them and pull them taut before winding some more. The further into the process I went, the more yarns got loose.  I feared a very large tangle at the process end, but luckily, the yarns separated better than my last cotton warp did.  Are there any weavers out there who have any idea how the yarns can come off the loom unevenly, after being wound with the same tension and tied off frequently??  I can't figure it out, but it's driving me crazy.

Here's where I stand now, with all the yarn on the back beam, in the color order I wanted. 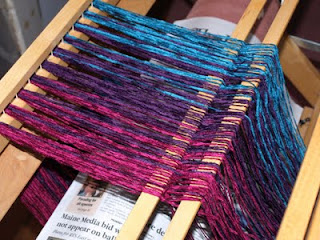 After I thread them, sley them through the reed and tie them on the front beam, I can start weaving.  Having never worked with chenille before, I have to do a bit of internet research to see if what I have in mind might work.  I've decided against fringe, because A) I hate fringe, and B) I think I read that you have to go to great lengths to protect chenille fringe pre-twisting, like loosely weave them with waste yarn or something.  Too much bother for something I'm not fond of.  Instead I think I will weave headers and footers with black tencel so I won't have really thick hems to deal with.

Off I go to see how the next few steps turn out.  The great weather outdoors is beaconing me, but I've had my time out there for today and I really need to get this ready for weaving.  If I leave loose ends, the cat finds a new plaything during the night when nobody is around to stop him.