Having never worked with chenille before, I was unprepared for the dichotomy of emotions and experiences involved in this scarf project.  As I hinted at in my last blog, winding the warp and chaining, usually the most mindless and least taxing of the whole procedure, was not easy.   The yarns caught frequently while I was using the warping board.  Once the bouts were tied on securely, I was surprised to find during chaining that the yarns were not even in length, a mystery that still bugs me.  The only thing I can think of, is that as I chain I stand at an angle to the board, so the inside yarns have more distance to my hands than the outside yarns, but I do the same for all yarns, so it really doesn't make sense to me.  If anyone out there has any other good ideas, please let me know.

As I put the warp on the loom, these differences in length became more and more troublesome.  I have learned NOT to comb through the warp with my hands, trying to even out the tension, as it leads to a big, knotty, mess. But just plucking at it wasn't doing the trick either.  In the end, I gingerly tried to isolate the yarns that were the loosest, and pull them separately to even them out.

Threading the heddles and sleying the reed were only a bit problematic, mostly in untangling the knotty bits (ha! a pun), that came about because of those loose threads.  As I tied the warp to the front apron rod, I had several just break in my hands. By the time I was done dressing the loom, I had firmly decided I DID NOT LIKE CHENILLE and WOULD NEVER USE IT AGAIN!  Uh huh.   Once I started weaving, all I wanted to do was be done with it.  That was before I saw how quickly it wove up, and what a soft, cushy material chenille can be.

Initially, I used a teal weft and wove it fairly densely.  I had read on another weaver's blog that she had tried to weave it more loosely and ended up with a "sleazy" material.  I certainly didn't want that!  So I beat the teal as firmly as possible, which looked like this on the loom: 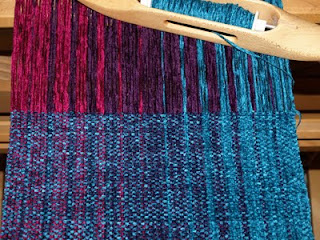 The warp colors are very muted, and the material is quite dense and thick.

Knowing that my sewing machine would never be able to sew through three layers of this, I wove the hem allowance using black tencel.  The warp colors really showed through and looked brighter than just the warp alone.  More on this later.

After the teal, I wove a scarf using the magenta.  I started with the same dense beat, but switched to a slightly softer one.  That scarf looked like this: 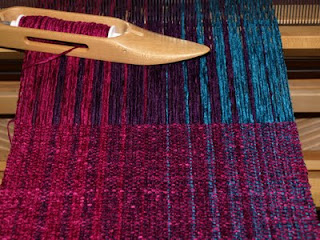 Not a huge difference, but the warp is a bit more noticeable.

Lastly, I wove using a deep purple, and really made the effort to more gently use the beater to place the weft against the fell line.  This really slows my weaving, but ultimately was worth it. 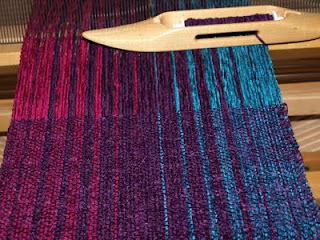 You can see how much more clearly the pattern of colors in the warp show.  The material still felt nice and soft, just not as thick as the earlier scarves.

At this point I was surprised to see how much extra warp I had left on the loom.  Usually, I hope for a bit so I can weave a sample to keep and show people, should they have an interest in something I've made but don't have on hand. But this time I could see that I had quite a bit, though not enough for a full scarf.  So, this time, I thought I'd try to weave the whole scarf with the black tencel, just to see whether it was possible to have a good, solid material that is usuable, washable, and very warp faced.  It took alot longer to weave, and I again had to consciously
place the weft against the fell line, not beat it, but I loved the way it looked: 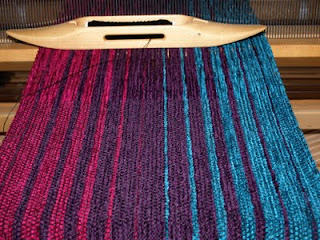 I dreaded finishing these once off the loom, since I was sure I would encounter more issues.  To my surprise, they cut apart easily, and I pinned and sewed them in a short period of time.  I did find that I didn't take into account that the hems, which I made long enough to fold over twice and be sewn to itself, would look markedly different than the rest of the cloth.  This left a small (~1/2 inch) band of coordinating color on each end.  They were not noticeable on the purple and tencel scarves, but quite so on the teal and magenta.  I debated modifying them so they wouldn't show, but in the end decided that they were not an eyesore but added "interest" to the scarves.  Into the washer, laid flat to dry, and then a quick minute or two in the dryer on fluff (no heat), and out came the most soft, luxurious things I've ever woven.  No ironing, no noticeable issues with the selvedges - I was most happy.

Here are photos of each scarf, so that you can see the hems: 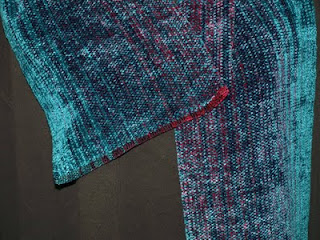 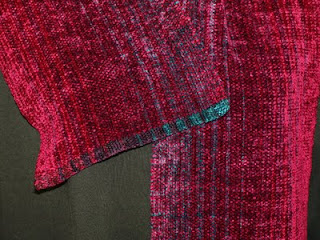 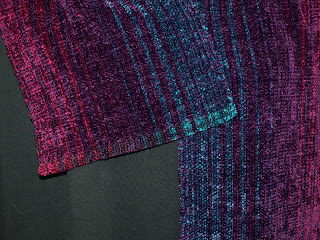 I brought in the finished scarves to work, just to let my coworkers see how soft they were, and sold two, for which I am quite grateful.  I am in the process of measuring for one more, but after that I need more yarn, so I'll move on to other projects.  But I'm definitely going to make more of these in time for the holiday craft fairs.

The lessons I learned were:  do not judge a yarn based solely on one or two elements in the weaving process; don't be afraid of using bright colors in unusual ways; weaving at different PPI's or densities can make a remarkable difference in cloth and should be taken into account when planning a project; and I have a great appreciation for the support I get from my coworkers! 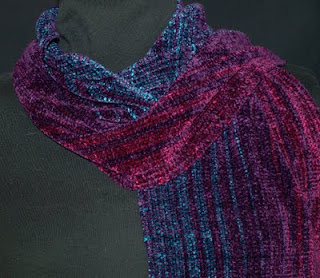